Monsanto was the only company in the US that made Polychlorinated biphenals, or PCBs. The chemicals were once used as coolant fluids. Federal regulators banned PCBs in 1979. But the chemicals linger in the environment.

In Portland, PCBs still contaminate the Willamette River and the Columbia Slough. And they're found in fish in the area.

Attorneys pitching the Monsanto #pollution suit say that by 1969, the company knew PCBs were found in shrimp, fish, oysters, and birds.

The attorneys pitching the case allege that Monsanto promoted its PCBs even though it knew they were contaminating food & wildlife.

Mayor Charlie Hales said the city has spent more than $1 billion cleaning up the Willamette.

"The citizens of Portland dug deep in order to pay for cleaning up our mess, and other businesses should be held to that standard,” Hales said.

In a written statement, a spokesman said Monsanto is not responsible for the costs associated with PCBs.

"Monsanto today, and for the last decade, has been focused solely on agriculture, but we share a name with a company that dates back to 1901,” the statement read. 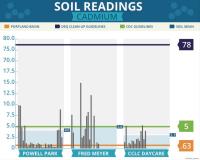 The DEQ said Wednesday that it took 67 soil samples from the area around Bullseye Glass in southeast Portland. Samples were taken from a Fred Meyer parking lot, a day care center and Powell Park.

The samples were tested for arsenic, cadmium, chromium, lead and several other elements.

They found that most heavy metals were at background levels. But there were a few samples that showed elevated levels.

Lynne Saxton, the director of the Oregon Health Authority said overall, the findings are encouraging.

Authorities announced that it's now okay to eat produce grown in backyards again, although they did recommend gardeners wash their produce and their hands.

The state has also been collecting results from anyone tested for cadmium. Out of 247 tests, it found seven people in Multnomah County with detectable levels.

Two were children, and three had levels that require some kind of clinical follow up.

There can be several reasons a person might have high cadmium levels, other than pollution. For example, if they smoke or engage in a hobby associated with cadmium.

The Oregon Health Authority also reviewed rates of lung and bladder cancers — the two kinds of cancer associated with cadmium and arsenic exposure.

The agency found that the incidence of those diseases was no higher than expected near Bullseye and Uroburos glass.

It’s good news. But so far the testing has focused on the soil.

Results from air sampling are expected next week.

Although the manufacturers have suspended their use of the arsenic, cadmium and chromium used to color glass, some residents might be skeptical of these results. Authorities at the meeting said they'll make an effort to get information out more quickly. They're also sending concerned people to a new webpage.

Saxton said this issue has opened the doors to what she called “long overdue changes."

The DEQ is launching a new rule-making process to move Oregon’s system closer to those in Washington and California, which better account for public health risks.

The U.S. Department of Agriculture confirmed Thursday it’s investigating the treatment of research monkeys at Oregon Health And Science University.

The feds wouldn’t outline the reason for the investigation.

But over the last two years, OHSU’s Oregon National Primate Research Center has been warned about monkeys being burned by heating pads; one that died under respiratory distress; and 27 that either died in fights or were seriously injured.

Michael Budkie of ‘Stop Animal Exploitation Now!’ says OHSU entered into a settlement with the USDA four years ago, after violating the Animal Welfare Act. And two years ago, got a warning letter,  “There comes a time when you begin to wonder how often a facility will be allowed to break the law," he said.

"We would like to see the USDA take a meaningful enough penalty against OHSU that either they stop breaking the law, or they move away from using primates in experimentation.”

In a statement, primate center director Nancy Haigwood said her office had not been contacted about any investigation. She said scientists adhere to the "appropriately stringent" Animal Welfare Act.

The U.S. Supreme Court told the state of Vermont on Tuesday it can’t force health insurers to hand over data on the amounts they pay for various medical claims. 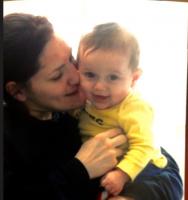 Imagine you’re the mother of an infant. And you pump breast milk every day to nourish your newborn. Then you discover that, despite your effort, your baby has actually been given someone else’s milk. That’s what happened to inmates at the Coffee Creek Correctional Facility in Wilsonville. That’s Oregon’s only prison for women. The Oregonian’s Laura Gunderson uncovered this story and joined All Things Considered host Kate Davidson to talk about the mix-up. To hear their full conversation, click play in the audio player above.

Q&A with The Oregonian's Laura Gunderson

Laura Gunderson: Well, there were four women in the program right now. These are women who were incarcerated and then gave birth. They don't actually have the babies there at the facility. But they have the babies, and then the babies go to family members or to case workers or to foster families, who care for them. And to try to keep that bond going and do what they can for their babies while they are at Coffee Creek, the women are allowed to breast feed. They each have their own pumps, and they pump several times throughout the day, take the milk to the medical center, and the medical center nurses put them in a freezer.

I heard from one of the inmates, a woman named Trisha Mart, who discovered from her husband on the outside that when he had gone to feed the baby – everything had been fine – he thought he had fed the baby, he came back and saw that the empty bag on the kitchen counter had another inmate's name on it.

KD: How was it marked? Was it a formal label or a marker?

LG: It really seems to vary. That was a sticker with somebody's name on it. Trisha had always written her name on it, but I don't think the family recognized at that point it was something they should be checking. There didn't seem to be a rule that when you've submitted your bag to medical center that it had to have a name on it. So when the nurses distributed the milk to the families — the families have to come weekly to pick up the milk – they distribute them into ice chests for the family, and it appeared that when that would happen, there was, you know, confusion, and that families were getting anybody's milk.

When I got the letter from Trisha telling me about this, what struck me is that this is kind of the essence of what a prison is supposed to do: be very clear about what comes in and what goes out.

KD: So we're talking about at least four inmates involved in this breast-feeding program. Is there any health risk to the babies that might occur from having another mother's milk?

LG: Well, definitely the women involved in the program were concerned because they knew at least one of the other inmates had self-reported she had Hep C, Hepatitis C. They also had concerns because, of course, there are women who take medications, both that they have been told to take, but others, they say, take them as contraband, and in addition to medications, also drugs.

KD: Have you talked to any doctors who might indicate whether there is an actual health risk to the babies?

LG: The likelihood seems low. It's more likely that a baby would contract Hepatitis C because its mother had it, and it was something that, in bearing the baby, that's why the baby would have Hep C. There is a small chance that it can be contracted through breast milk, and the doctors I spoke to were pretty sure that probably these babies were OK, but they won't know for sure until 18 months when they can do the test that most accurately tells you whether or not that that disease has been passed on.

KD: I think listeners hearing this right now might think it can't be that hard to correctly label a bag of breast milk. Do you have a sense of whether this was just a systems failure or whether it says something deeper about a cultural problem at the prison?

LG: Well, it struck me as both. The Department of Corrections said that they have addressed this, that they now will not take the milk unless there is a name on it, and they have two nurses who will check through the process that they distribute the ice chest to the family. But at least one of the inmates, a woman named Marcie Harris, felt that throughout the process that she was complaining, that she was punished for complaining, and she was told not to talk about it, not to talk about it to the other mothers or her family or her lawyer. And she felt that that scared her.

KD: Has anything come to light since your first story was published?

LG: Yes. I've definitely heard from another inmate, who says that she and others during the program's time in 2013 had the same experience, and that definitely contradicts what I have heard from the Department of Corrections, who says this is a one-time thing that only happened a couple of times. I know from the inmates today that it happened many times, and it also opened up the issue that families on the outside felt as if they weren't being heard. They were trying to advocate for their family members inside, and they didn't feel they were being listened to.

The U.S. Supreme Court told the state of Vermont on Tuesday it can’t force health insurers to hand over data on the amounts they pay for various medical claims.

The ruling means large self-insured companies like Intel, don’t have to give the state their data. In Oregon, about 23% of the population get their insurance through such companies — that’s the combined populations of the cities of Portland, Salem and Eugene.

A decision over health care information may not sound like a big deal, but finding patterns in big data is how Vermont, the Obama administration and Oregon aimed to reduce healthcare costs.

“It doesn’t completely undercut the ability to collect this data, or the usefulness of this data," said O'Brien. "I think it makes the data significantly less representative of the reality of what’s going on."

Oregon health officials are warning of unhealthy levels of heavy metals in Southeast Portland's air. They found high levels of cadmium and arsenic at a monitoring station near SE Powell Boulevard and SE 22nd Avenue.

Oregon health officials are warning of unhealthy levels of heavy metals in Southeast Portland's air. They found high levels of cadmium and arsenic at a monitoring station near SE Powell Boulevard and SE 22nd Avenue.

David Monro with the state Department of Environmental Quality said his agency has been studying the correlation between metals in the air and metals found in moss.

It's an ongoing study DEQ is doing with the U.S. Forest Service, Monro said. When the agencies found higher-than-expected levels of arsenic and cadmium in Portland, they decided to publish some of their results early.

"There's a lot of information right now that we don't have, but we have enough information to know that we have levels of metals in the air that are of concern, and we wanted to start getting that information out to people," Monro said.

Exposure to heavy metals like arsenic and cadmium can increase cancer risks and damage kidneys, lungs and bones.

Advocacy group Neighbors for Clean Air is connecting the discovery to a possible cancer cluster in Southeast Portland.