The Silver Alert bill requires police agencies to develop policies to find and assist seniors with dementia who get lost. The bill also orders the Oregon Health Authority to more proactively ward against Medicaid fraud. Several other bills passed the House Friday, including a bill to codify equipment testing protocol for dentists and one that will study giving parents the option of subsidized private insurance instead of the Oregon Health Plan for their children.
By:
Christopher David Gray 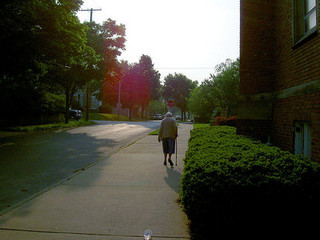 The Legislature has passed the Silver Alert Bill, tasking municipal police and county sheriff’s offices with developing a policy to find and assist senior citizens who go missing.

“It focuses on helping people with dementia who wander from their homes,” said Rep. Chris Harker, D-Beaverton. “It does so by requiring Oregon’s sheriffs and police to develop formal policies in finding and assisting those missing persons.”

The Silver Alert Bill was a chief priority of the Oregon Alzheimer’s Association.

A second part of Senate BIll 1577 orders the Oregon Health Authority to develop a software program for snooping out fraudulent behavior in the Medicaid system.

The Obama administration has saved $14.9 billion since 2011 in the Medicare system through similar technology, called the Fraud Prevention Initiative. The government has caught 14,700 providers in fraud, more than twice as many perpetrators as the previous two years.  The federal government also estimates that states lose $18 billion through Medicaid fraud, compelling 17 states and now Oregon to implement an advanced fraud protection system.

Currently, the state catches Medicaid fraud in hindsight, but has little means to prevent it before it happens.

Sen. Tim Knopp, R-Bend, pushed an identical measure last session, but it died in the House as a sacrificial lamb in a squabble between Democrats and Republicans.

Harker said the savings from fraud would be high enough that the detection system should pay for itself, but it would likely be one of the first state IT projects to fall under the safeguards of House Bill 4122, which requires third-party oversight and greater circulation of audits. That bill passed the House on Monday and now awaits a hearing in the Senate.

Senate Bill 1577 passed the House unanimously on Friday and had a unanimous vote in the Senate a week ago. It now heads to Gov. John Kitzhaber, who has promised to sign the bill once it reaches his desk.

The House sent the governor a few other healthcare bills Friday on a unanimous vote.

SB 1519 will require dentists to test their sterilization equipment weekly, and calls for expunging the records of dentists who had been fined for doing so previously.

That bill was drafted by Sen. Fred Girod, R-Stayton, who accused the Board of Dentistry with racking up fines in a moneymaking scheme based on the dentists’ failure to follow a little-known bylaw. The dentistry board refuted his accusations.

Patrick Braatz, the executive director of the Board of Dentistry, told The Lund Report that his board's budget is set by the Legislature and the board cannot spend more than that budget, even if they do collect a windfall of money from civil penalties.

"We've always taken in more than we anticipated, and we've always spent less than we collected," Braatz said.

Braatz agreed to a compromise bill once it was clear “expungement” would be limited to reversing fines and removing dentists’ names from its website, if they had simply failed to adequately test their equipment.

Senate Bill 1579 will help patients with chronic medications to coordinate their refills with their pharmacist, rather than taking multiple trips to the drug store each month.

The House also passed Senate Bill 1526, which directs the Oregon Health Authority to ask the Centers for Medicare & Medicaid Services about  seeking a waiver to divert money from Medicaid to pay for subsidized private insurance for middle-class children who currently receive their healthcare through the Oregon Health Plan, but whose parents would prefer them to have private insurance on Cover Oregon.

SB 1526 is drastically scaled back from its original version, which would have directed the state to apply for the waiver. The current version simply asks the health authority to report its findings to the interim legislative health committees when they meet in September.

The health authority would also have to determine the effects such a waiver would have on coordinated care organizations, which could lose some of their healthiest members, as well as the state budget, since private insurance would likely cost more to provide than the Oregon Health Plan.

Earlier, state officials gave parents the option of a private insurance plan, but saved taxpayers $12 million by placing them in the Oregon Health Plan, where clients can more efficiently receive care in CCOs, which have greater cost controls than private insurance.