Sen. Alan Bates has pushed a bill that will help eliminate unnecessary trips to the drug store by allowing pharmacists to develop prescription drug plans with patients when chronic medications are refilled on the same date each month. The coordination of drug refills should save money and lives by making it easier for patients to adhere to their medication regimens.
By:
Christopher David Gray 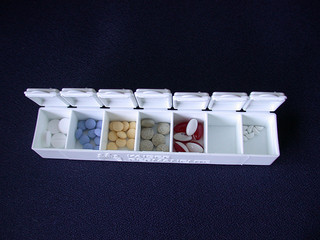 The House Health Committee passed a bill Wednesday that will help consumers with multiple medications cut down on their trips to the drug store and allow them to get all of their long-term medications filled at the same time each month.

Rep. Jim Thompson, R-Dallas, told his colleagues that his 91-year-old mother-in-law has 13 medications, all of which need to be refilled on a different day of the month. “Since I took her car away, she’s not the one going to the pharmacist 13 times -- I am.”

Senate Bill 1579 puts the onus on the health insurer, self-insured plan or coordinated care organization with a prescription drug benefit plan to develop a policy by Jan. 31, 2015, regarding medication synchronization.

If a pharmacist realizes that a patient will have other refills, the bill will empower them to give them refills of all their medications so that people won’t have to make multiple trips when their  prescriptions expire.

“You have to give this authority to pharmacists,” said Sen. Alan Bates, D-Medford, who sponsored the measure with the Legislature’s other physician, Sen. Elizabeth Steiner Hayward, D-Beaverton.

The coordination of care could save the system significant money by simplifying the management of chronic conditions and eliminating unnecessary opportunities for a patient to go off their medications and end up needing more expensive care.

“I’ve had patients who ran out of cardiac medication who have ended up in the ER and also the ICU,” Bates said in an earlier Senate Health Committee hearing.  “It’s too hard for them to go the drug store three or four times.”

A study from Virginia Commonwealth University found that patients were three to six times more likely to adhere to their prescription drug schedule if their pharmacist had developed a plan with them to coordinate the dispensation of their medications on a monthly basis.

Bill Cross, the lobbyist for the Oregon State Pharmacy Association, wrote in his testimony that patients would have the chance to develop a plan with their regular pharmacist to arrange all of their medications to be dispensed either at a time chosen by the patient or build their refills around a so-called “anchor medication” -- usually the most expensive drug that a patient takes.

The interaction with the pharmacist could also give people an opportunity for counseling, health screening or a review of their medication management.

SB 1579 passed the Senate unanimously last week. It will now go to the full House for final approval, with a vote likely early next week.

Image for this story by Flickr user Dvortygirl (CC BY-SA 2.0).