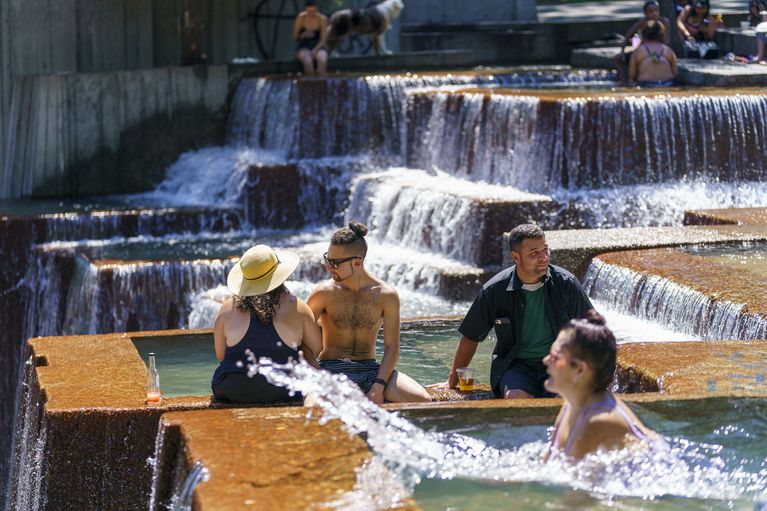 Dozens of people sat and played in the Ira Keller Fountain Park in Portland on June 28, 2021./Kristyna Wentz-Graff/OPB

Nearly 1,000 people died during the historic heat wave that baked the Northwest from Oregon to British Columbia as temperatures soared above those in Phoenix, Arizona or Las Vegas, Nevada.

Canadian authorities said that between June 25 and July 1 nearly 800 people died in British Columbia, where temperatures surpassed 120 degrees Fahrenheit. Washington state reported nearly 60 deaths, and in Oregon, the state medical examiner said Tuesday that 107 people had died. The highest temperature in Oregon was seen in Salem -- 117 degrees Fahrenheit -- just above the 116 degrees in Portland.

The heat wave started June 25 and gobsmacked the Northwest, a region where many make do without air conditioners during the summer. The deaths represent people who died through July 3.

Thirty-two women died and 75 men died, with an average age of nearly 67 years old, according to an analysis of the state data by The Lund Report. They ranged in age from 37 to 97 years old.

The Multnomah County Medical Examiner has ruled that hyperthermia, or death by excessive heat, is the cause for 30 of the deaths. The rest of the cases are suspected hyperthermia.

When hyperthermia sets in, the body’s natural mechanisms can’t cope with the heat. There are several stages to hyperthermia, including heat cramps, heat exhaustion and heat stroke, a life-threatening condition that happens when the body’s temperature hits at least 104 degrees Fahrenheit.

But it wasn’t enough. In a statement, Multnomah County Chair Deborah Kafoury said the county will conduct an analysis of the county’s response to the heat wave and how to plan for the future.

The work of death investigators will guide that effort and help the county plan prevention efforts. In a release, county officials said investigators continue to look at suspected cases, calling the situation an “unprecedented mass casualty event.”

Even within the last 24 hours, more cases in Multnomah County emerged. The county identified 64 cases in a Sunday press release, and the state medical examiner’s office on Tuesday identified 67 cases.

“The county’s death investigators are working to understand where a decedent is from, where they died, with notes specific to the circumstances of each death,” said Multnomah County Health Officer Dr. Jennifer Vines in a statement. “This part of the work takes time to do right and is top priority for informing our prevention efforts for the rest of the summer and into the future.”

British Columbia was hit the hardest with a regional record temperature of 121 degrees Fahrenheit in the town of Lytton, about 50 miles northeast of Vancouver. Lisa Lapointe, British Columbia’s chief coroner, initially said that 719 people died from June 25 through Thursday -- triple the average the province would expect at this time of year. But by Tuesday, Canadian authorities reported 777 deaths.

Washington state had 57 heat-related deaths from June 26 through July 1 and investigations into others are pending, said Teresa McCallion, spokeswoman for the Washington State Department of Health.  More than a dozen people died of heat-related causes in the Puget Sound region of Washington state, the Seattle Times reported.

The stream of ambulances didn’t stop, forcing hospitals to stop receiving them.

Cooling centers opened across the state, from Deschutes to Columbia to Jackson County. Officials handed out water, provided meals and offered a respite from the inferno outside.

Multnomah County had three cooling centers: one at the Oregon Convention Center in Northeast Portland, another in North Portland and the third on East Burnside. More than 1,000 people stayed overnight, it said.