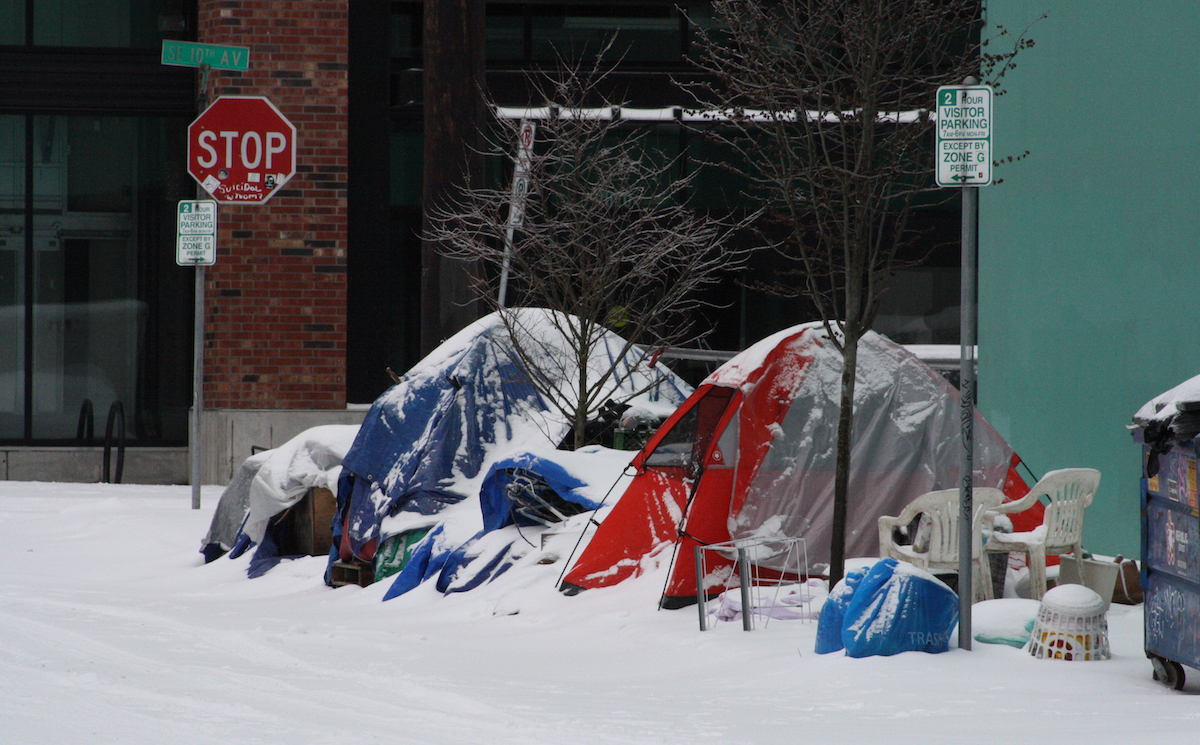 In the hours before Ryan Homsley died from a combination of methamphetamine and hypothermia on Nov. 6, 2020, he sought help at a hospital emergency department. Staff reportedly thought he was interested only in obtaining narcotics and discharged him into a cold night. He died in a muddy ditch the following morning, his clothes soaked through.

The 39-year-old was one of 126 people confirmed to have died in Multnomah County last year while experiencing homelessness, according to a county report released Wednesday. It’s the greatest number of deaths among people living outside since the county, in partnership with its Medical Examiner and Street Roots, began issuing the annual report, called Domicile Unknown, in 2011.

None of the deaths in the 2020 report were attributed to COVID-19.

Homsley continued to wander the hospital grounds after he was discharged the night before his death, “dancing on the helicopter pad and gyrating along the fence,” according to the report. Temperatures dropped to 36 degrees the following morning.

His death is illustrative of circumstances surrounding the deaths of many others.

As in every year prior, most deaths counted in the report were accidents, most of the deceased were men, and the average age of death was much younger than it is for the general population — more than three decades younger in 2020 with the average age at death being 46.

But for the first time, methamphetamine contributed to nearly half of all the deaths counted last year, at 62 — the most yet.

Over the past nine years, the percentage of deaths involving meth has climbed steadily each year, up from just 3% in 2012.

In 2020, meth contributed to the deaths of 49% of people who were experiencing homelessness when they died, up from 38% the previous year and 28% the year before that.

Meth has also become a more deadly illicit drug in Oregon overall, contributing to 588 overdose deaths in Oregon between 2016 and 2018, up from 342 deaths in the three-year period before that, according to data from Oregon Health Authority. 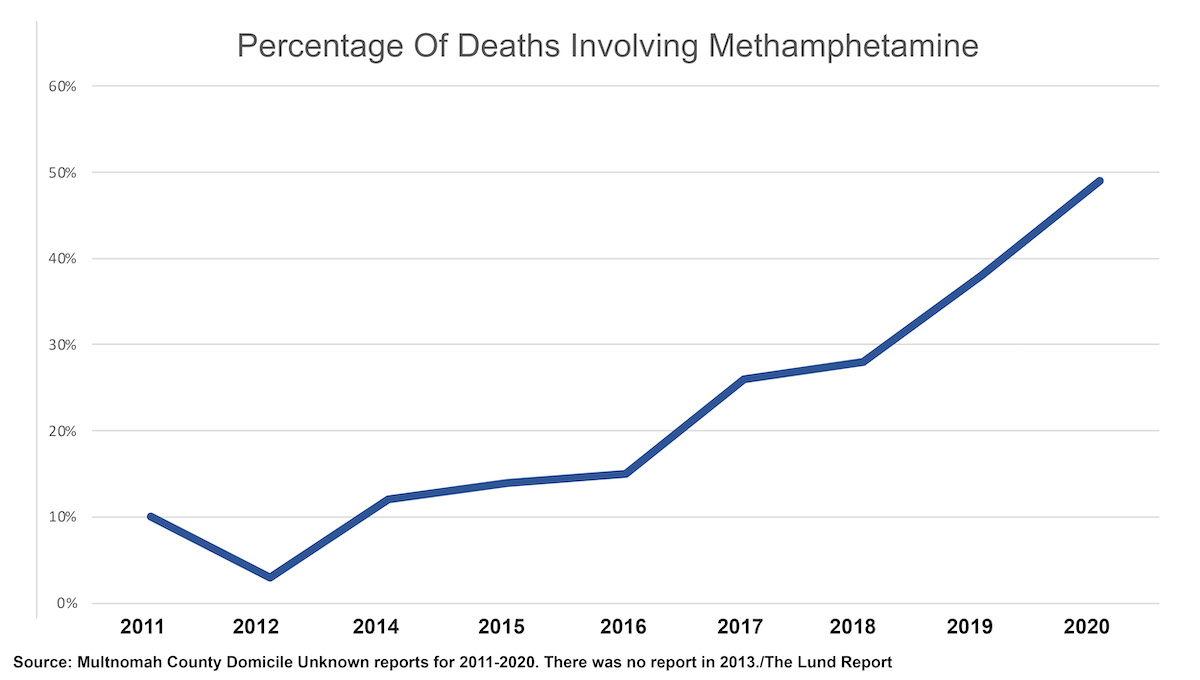 “Unlike opiates and alcohol, which tends to slow people down, make them less alert, meth is actually a stimulant, so it energizes people, it can lead to a very fast heartbeat, it can lead to high blood pressure, and it can overstimulate the brain leading to violent or erratic behavior. Meth can also worsen or even provoke a mental health crisis. We’re hearing reports that meth is stronger, cheaper and more available on our streets. And unfortunately, unlike opioids, there’s no treatment that eases meth intoxication or helps with recovery,” explained Multnomah County Health Officer Dr. Jennifer Vines during a virtual Wednesday morning press conference that accompanied the report’s release. “The bottom line is that people need a quiet safe place to relax, to hydrate, to have some food and to recover from their meth use.”

The pandemic has decreased the availability of places where people can seek respite, said Multnomah County Harm Reduction Clinic Specialist Julie Lukesh. “When people are using meth, and they don’t have a safe place to rest, to get sleep and food and take care of these primary physical needs, they’re much more likely to experience meth psychosis, especially if they’re already dually diagnosed with a mental health disorder,” she said. This contributes to a cycle of violence on the streets that in turn gives people reason to use stimulants to stay awake for protection.

“Our hope is that with Measure 110 funding, we'll see more access to behavioral health services that might include sobering centers staffed by experts who can, you know, lift up this problem and support our neighbors who are really really struggling right now,” Lukesh said.

The most recent Point-In-Time Count in Multnomah County found that on a single night in January 2019, there were 4,015 people experiencing homelessness. It’s widely believed that number has only increased in the nearly three years since as the region weathers a pandemic amid an ongoing housing shortage and substance use epidemic.

Earlier this year, Oregon Legislature passed Senate Bill 850, requiring anyone who fills out death certificate information in Oregon to categorize a person’s residence at their time of death as “domicile unknown” when the deceased was experiencing homelessness so these deaths can be better tracked statewide.

In her introduction to the new Domicile Unknown report, Multnomah County Chair Deborah Kafoury wrote that “addressing a renewed methamphetamine crisis” will require action. “Key to our intervention,” she continued, “will be the opening in 2022 of the downtown Behavioral Health Resource Center and smart, evidence-based use of Measure 110 funding to make effective addiction treatment as accessible as possible.”

Also featured in the report was the death of Christopher Madson-Yamasaki, who died in a tent at age 26 of a methamphetamine overdose. In addition to addiction, he also struggled with symptoms of schizophrenia. He was on a wait list for a residential treatment program for people with mental illness and substance use disorder, according to the report.

Yamasaki also spoke about her son during the press conference Wednesday. “He did want help,” she said. “But we desperately need dual diagnosis centers and walk-in detox — safe places for people to be who are on meth. And we need better options. Help is not as easy to get as many people think. There’s just not enough resources available.”

While the overall number of deaths is up, the percentage of deaths people experiencing homelessness constitute in Multnomah County has remained steady over the past five years at an average of about 9%, according to the report.

But the actual number of people who died while experiencing homelessness was likely much higher. Due to the report’s methodology, only deaths entered into the Oregon State Medical Examiner’s database of investigations are evaluated. This results in a count that only captures deaths that occur in hospitals if the deceased was there for fewer than 24 hours. People who died in a hospital after being admitted for a period longer than that — such as might be the case with COVID — are not included.

And there were 46 deaths evaluated for inclusion in the report for which the county was unable to confirm housing status, so they were left out of the report as well.

During the Wednesday press conference, The Lund Report asked why data from hospitals is not included in order to calculate a more complete number for the report.

“We have tried over the years to get data from hospitals, and we have not been successful,” Kafoury said in response.

The passage of Senate Bill 850 will allow the county to better calculate a more complete number after it goes into effect Jan. 1, added county Chief Medicolegal Death Investigator Kimberly DiLeo.

Also of note in this year’s report was that the number of deaths attributed to suicide was the lowest, at 3%, than any other year.

In addition to showing the trend involving meth, the findings also reflected the region’s gun violence epidemic. Firearms caused 6 out of 8 homicides counted in the report, the highest percentage since the county began tracking that data in the report three years ago.

“By remembering those who passed as fully realized complex people, as our neighbors,” Kafoury said, “we can sustain the connection, conviction and resolution to make things better for those who are still alive. As these stories make clear, it's that human connection and relationships are critical to ending homelessness.”

Read more about those stories in the full report.

You can reach Emily Green at [email protected] and on Twitter at @GreenWrites.