Despite a voting record that has not been friendly to tobacco companies, Senate President Peter Courtney once again raised a sizable pot of cash from the parent company of Philip Morris. His support will be critical to a series of bills designed to reduce smoking and better regulate the sale of cigarettes. This story is part two in a three-part series on healthcare-related Oregon state campaign finance contributions.
By:
Chris Gray and Jen Kruse 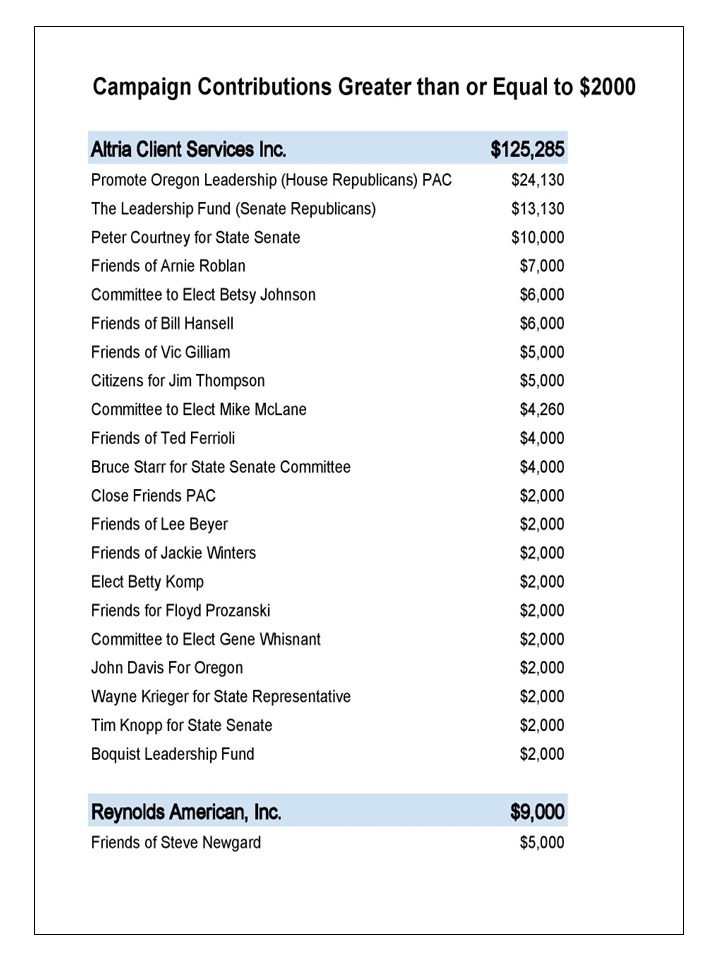 Senate President Peter Courtney, D-Salem, took in more money from tobacco companies in 2014 than any other Oregon politician, raking in $10,000 from Altria Client Services, the parent company of Philip Morris, which manufactures of Marlboro cigarettes.

The $10,000 he received from Altria was among the largest campaign donations he received from anyone, other than the public employees’ and teachers’ unions and his own party. Courtney was challenged for re-election by Republican Marion County Commissioner Patti Milne, whom he defeated by a margin of 53.5 percent to 46 percent.

Another Democrat, Sen. Arnie Roblan of Coos Bay took $7,000 from Altria, the second-most any Oregon politician reported getting from that company. Sen. Betsy Johnson, D-Scappoose, and Sen. Bill Hansell, R-Pendleton, each received $6,000.

Rep. Vic Gilliam, R-Silverton, and Rep. Jim Thompson, R-Dallas, each received $5,000. Gilliam managed to fend off a primary challenge in 2014, but Thompson lost his seat to challenger Mike Nearman.

Altria’s biggest checks actually went not to these individual lawmakers but to the Republican caucuses -- the House Republicans got $24,000 and the Senate Republicans received $13,000.

Reynolds American, which manufactures Camel cigarettes, also spent $9,000 on Oregon politics in 2014, including $5,000 on the failed campaign of Republican Steve Newgard, who sought election for a House district in Oregon City. Sen. Fred Girod, R-Stayton, received $1,500 from Reynolds.

A year ago, the lobbying of the tobacco industry was critical in scuttling a bill that would have given unclaimed class-action lawsuit settlements for legal aid programs for the poor. Philip Morris is locked in a lawsuit alleging deceptive advertising regarding its Marlboro Light cigarettes. The Legal Aid bill, House Bill 4144, would have required Philip Morris to pay a full settlement if the tobacco company lost the lawsuit. Because the legislation failed, the cigarette company will get to keep any unclaimed money from a possible settlement or court order, even if it is found liable. HB 4144 could have cost the company millions.

Before the 2014 session, Altria directed its campaign dollars at political moderates known for crossing the political aisle -- Johnson and Hansell as well as Sen. Jackie Winters, R-Salem -- all of whom ended up opposing the Legal Aid bill. But Altria also made handsome donations to Courtney’s political campaign, despite his support for HB 4144.

That bill has been reintroduced in 2015 as House Bill 2700, which passed the House Judiciary Committee on Tuesday on a party-line vote.

Courtney, a cancer survivor, also worked to pass a modest cigarette tax in 2013 to fund community mental health services. However, at the time, anti-tobacco advocates argued that a graduated 15-cent-a-pack increase would be too small to discourage smoking.

Courtney’s spokesman, Robin Maxey, did not return a phone call request for comment.

As senate president, Courtney has enormous power to decide which bills head to the floor for a Senate vote. He can also determine whether to assign a bill to a committee chaired by a moderate Democrat, like Sen. Laurie Monnes Anderson of Gresham, who presides over the Health Care Committee, or a liberal Democrat -- such as Sen. Michael Dembrow of Northeast Portland, the chairman of the new Workforce Committee. The chairs decide which bills have a chance to pass their committees, so long as they can receive a majority vote.

The 2015 session will be an interesting one to watch in regards to tobacco policy, as both Rep. Mitch Greenlick, D-Portland, and Sen. Elizabeth Steiner Hayward, D-Beaverton, have proposed bills that seek to increase the tobacco regulation in Oregon and cut down on the state’s tobacco smoking rates, particularly among teenagers.

Steiner Hayward wants to raise the age for tobacco sales to 21 while requiring tobacco stores to be licensed with the state and putting these stores under the watch of the Oregon Liquor Control Commission. She would reorganize the OLCC as the Adult Substances Control Commission, since it could become responsible for tobacco and marijuana as well as liquor and other alcoholic beverages.

Greenlick once again wants to raise the cigarette tax by $1 a pack -- with the strategy that a higher price will cajole people to quit and prevent younger people from starting. But House Bill 2555 will take the vote of at least one House Republican as well as a green light from Courtney and the support of either Sen. Johnson or a Senate Republican.

Monnes Anderson also has a bill to ban flavored tobacco, which has become a common sight in corner stores in the form of Kool-Aid flavored cigarillos. Deborah Kafoury, chairwoman of the Multnomah County Commission, has used her office to increase awareness of these products and push for tighter regulation in Salem.

Who says the Capitol ain't just smoke and mirrors...or...

smokem if you gottem...no hypocricy in them hallowed halls...