Surge In Oregon Nurse Applications Has State Board Seeking Help 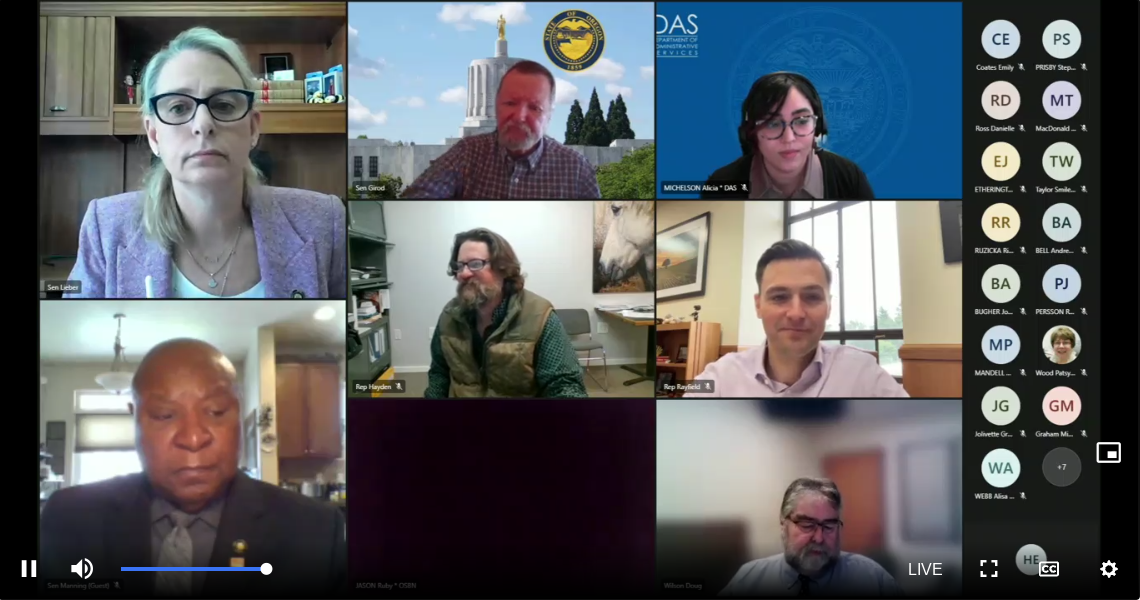 The Legislature’s Joint Subcommittee on Human Services on June 1, 2022 heard a request from the Oregon State Board of Nursing to hire more staff. The board faces an increase in licensing applications from nurses as the emergency authorizations for out-of-state nurses is set to expire on July 1./Screenshot by Ben Botkin

The Oregon State Board of Nursing says it needs more staff to efficiently process a flood of licensing applications from out-of-state nurses — one that’s been triggered by the end of a loophole established for the pandemic.

The state board of nursing on Wednesday asked lawmakers to authorize new hires so it can close a chapter on the state’s response to the coronavirus. On March 8, 2020, Gov. Kate Brown declared a state of emergency due to COVID-19, which allowed out-of-state nurses to travel to Oregon and work through emergency authorizations as hospitals, clinics and long-term care facilities dealt with COVID-19 surges and backlogs of patients as elective procedures were halted. The move allowed traveling nurses to work immediately without waiting for licensing paperwork.

However, the nursing board stopped issuing the special authorizations on April 1 when the governor declared the emergency over. Now, out-of-state nurses can’t practice without an Oregon license after July 1. They’ll need to be licensed in Oregon, except for cases in which employers request and receive a 30-day extension from the board.

The Legislature’s Joint Subcommittee on Human Services heard the request on Wednesday and recommended that the full Joint Emergency Board approve it. That panel meets on Friday. The request is only for the authority to spend money, not a request for state dollars. The nursing board gets its nearly $21 million budget from fee revenues and federal dollars. But like other state agencies, the Legislature controls and authorizes its budget.

During the pandemic, the nursing board issued more than 13,000 emergency authorizations for out-of-state nurses to work in Oregon, said Ruby Jason, executive director of the nursing board, in a Wednesday presentation to lawmakers.

The flood of new license applications means the board is no longer able to meet its benchmark of a technician reviewing applications within two weeks and contacting the applicant about what documents are still needed, Jason said.

The agency wants to hire two more staff members to process applications, which is estimated to cost $164,645 in wages and benefits for the 13 months left in the two-year budget cycle.

“That two-week benchmark has gone out the window,” said Jason, adding that the state has seen applications more than quadruple with the pending change to licensing requirements. The board is now two months behind, Jason said, calling it a “far cry” from its goal.

“I have no idea how long this is going to last,” Jason said. “Also we have graduation season upon us and we’re all very aware getting nurses into the workforce is a priority for our entire health care system.”

Due to the uncertainty of demand for licensees, the two employees will be classified as limited duration, or temporary, as state officials monitor the situation.

The Oregon Nurses Association welcomed the move, with a spokesperson noting that nurses working under the emergency authorization did so without falling under the jurisdiction of the state nursing board. The board backs that up, noting in records that because emergency authorizations are not allowed through state law, the board cannot hold people working through them accountable.

“Oregonians deserve to know the nurses they receive care from have licenses that are regulated by the (Oregon State Board of Nursing),” said Kevin Mealy, a spokesperson for the Oregon Nurses Association, in a statement to The Lund Report. He said the nurses association “supports the end of the emergency order because across Oregon there were nurses practicing without being under OSBN’s jurisdiction. However, we desperately need more nurses. OSBN’s request for authorization to increase staff is a prudent way to speed up the licensing process without sacrificing important oversight to ensure competent and qualified nurses. ONA strongly supports OSBN’s request.”

The board’s workload is also increasing as employers seek exceptions to the 90-day requirement. The board has received hundreds of requests from employers for 90-day licensure exceptions so they can employ non-Oregon licensed nurses, said Barbara Holtry, a spokesperson for the board.

As part of its request, the board said its cost for fingerprinting of applicants by the Oregon State Police will run $300,000 more than originally budgeted. That is due to a combination of increased applications and a $6 increase from the police agency for each set of fingerprints used for background checks. The request seeks authority to spend additional funding to cover those costs. Monthly fingerprinting costs now run $80,000 instead of $40,000.

Jason said no increases to fees for nursing applications are planned for this budget cycle or the 2023-2025 budget.

Jun 2 2022
News source:
The Lund Report
Keywords:
nursing, traveling nurses, state board of nursing
×
This article is for premium subscribers. If you are one, please sign in below.
You can see two more premium stories for free. To subscribe, click here. We depend on premium subscriptions to survive, and they are tax deductible.
Sign InGo Premium Not now