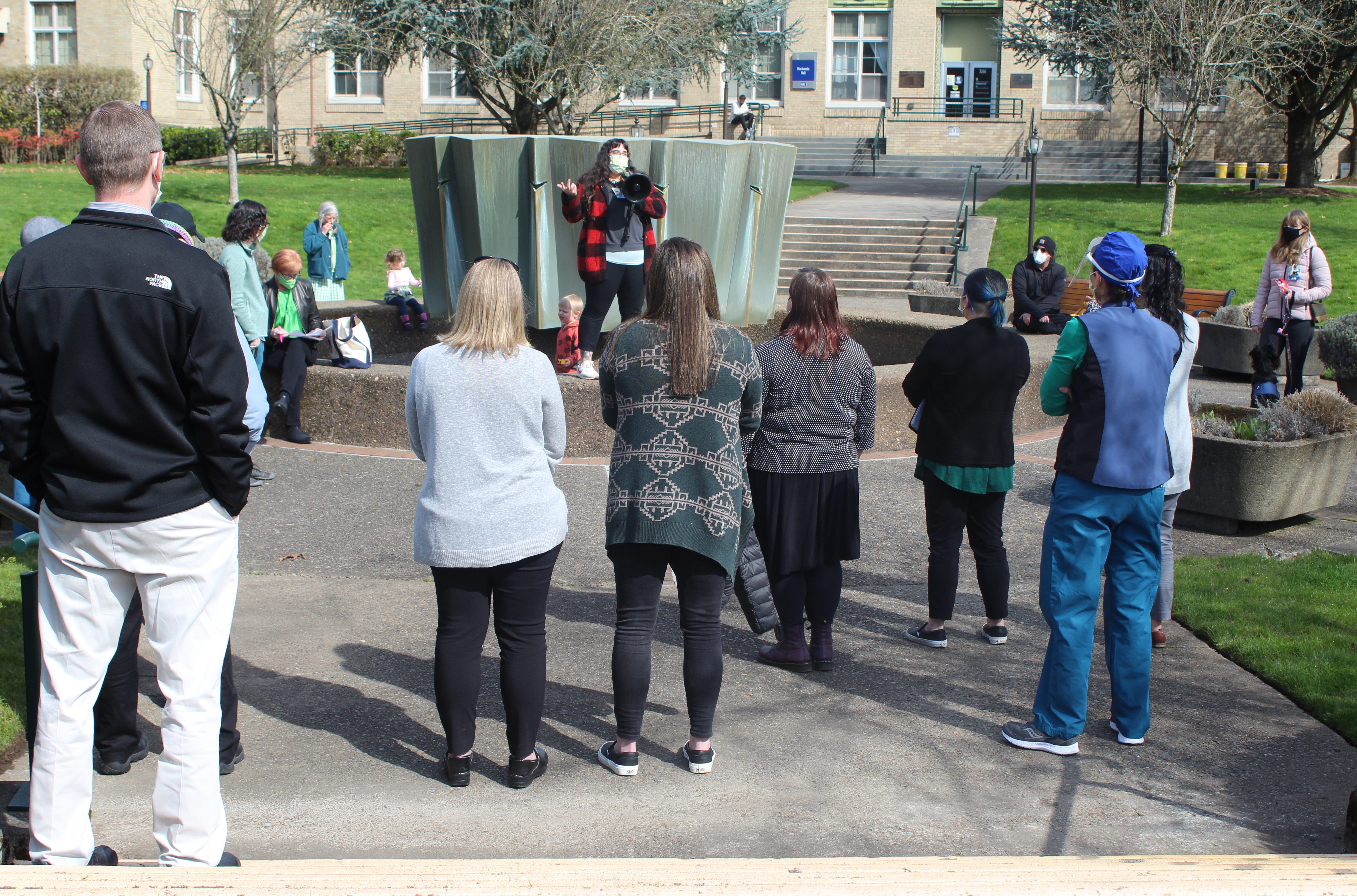 Nurses, pharmacists, social workers and others gathered outside an Oregon Health & Science University administrative building on Wednesday to demand a shift in culture at the institution.

It was the second protest at the site this month over a sexual assault lawsuit against a former OHSU resident. The case involves a former OHSU social worker who is now employed by the Veterans Affairs medical center next door to OHSU on Marquam Hill in Southwest Portland.

The lawsuit says that Dr. Jason Campbell, an anesthesiology resident, sexually assaulted the social worker and sent her pornographic messages last year and that faculty members failed to report it.

But several employees said the issue was much bigger than a single case.

“So many people here have experienced sexual harassment,” said Jenny Applegate, an OHSU social worker. “We feel it’s necessary to say something -- to be loud -- and demand accountability.”

Applegate, who has worked at OHSU nearly 11 years, is a former colleague of the woman suing Campbell. Other OHSU social workers also showed up.

“We felt that as a department we need to stand in solidarity with her,” Applegate said.

About 30 people gathered, compared with about 100 two weeks ago. The earlier rally was organized by a faculty member and included several professors. Wednesday’s 30-minute long-event was organized by Applegate, a member of the American Federation of State, County and Municipal Employees Local 328 union, which represents about 7,000 OHSU employees. Members of the Oregon Nurses Association, which represents about 3,000 OHSU employees, also turned out.

In reaction to the rally, OHSU said it "supports the rights of its members to coordinate, and participate in, nonviolent gatherings and demonstrations."

The lawsuit, filed in U.S. District Court in Portland, seeks $45 million in damages. It accuses several faculty members of failing to report the abuse and of fostering an atmosphere that protects abusers and punishes victims. OHSU denied the allegations in its answer to the complaint and said that one faculty member in particular who was mentioned in the complaint was not a mandatory reporter under Title IX. Federal rules require schools to establish a reporting system, which OHSU has. It is documented on its website. 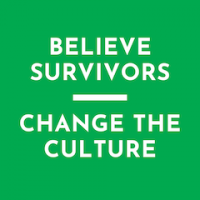 AFSCME green screen
OHSU’s Title IX coordinator and the head of its affirmative action department, Laura Stadum, was scheduled to give a talk on Tuesday on mandatory reporting, according to an AFSCME post. The union said Stadum canceled after AFSCME planned a silent protest with members appearing online in front of green screens that said “Believe Survivors” and “Change The Culture.”

The post said the cancelation reflected OHSU’s weakness on accountability.

“Despite all of OHSU's calls for change, all of its claimed interest in building a new culture and doing what's right, when given a chance to face public scrutiny, what did OHSU do? It protected and shielded one of its own high-level leaders,” AFSCME said in the posting.

An OHSU spokeswoman said the university did not know about the planned protest and that the event was canceled because of a scheduling conflict: "The Department of Affirmative Action and Equal Opportunity at OHSU is actively engaged in outreach and trainings across the organization," her statement said. "Allegations suggesting that OHSU is shielding its leadership are false, and only serve to undermine the AAEO and divide our community."

In reaction to the lawsuit, OHSU President Dr. Danny Jacobs promised change, saying the university would hire a consultant to investigate. But a number of employees, some posting on the institution’s internal website, criticized that move as more of the same.

“It’s not OK to hire another consultant and pretend that everything is fine,” graduate student Arthur Preston said at the rally. “We need accountability. People need to resign or be fired. If people don’t feel comfortable reporting, that’s a serious issue.”

Preston is about to graduate with a masters degree in public health. He said he’s enjoyed his studies but faulted OHSU for having a “two-tiered justice system.”

“They’re willing to sweep harassment under the rug and pay settlements and push troubled people to other institutions where they can continue to cause harm,” he said.

OHSU said it was on the verge of dismissing Campbell when he left late last year, a few months after an internal investigation found he had violated OHSU’s code of conduct. The lawsuit includes anonymous declarations by other OHSU employees who said Campbell harassed them, too.

Campbell was hired by the University of Florida but when the lawsuit was publicized, he was put on administrative leave.

Mar 17 2021
News source:
The Lund Report
Keywords:
ohsu, Jason Campbell, sexual harassment
×
This article is for premium subscribers. If you are one, please sign in below.
You can see two more premium stories for free. To subscribe, click here. We depend on premium subscriptions to survive, and they are tax deductible.
Sign InGo Premium Not now