New Governor Must Be Thoughtful But Decisive On Behavioral Health, Experts Say 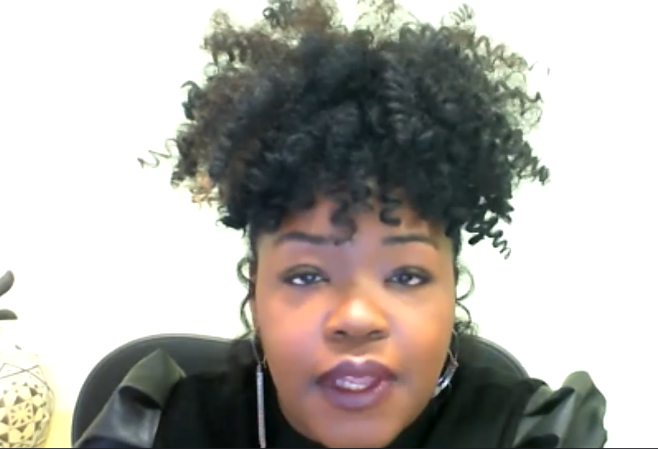 Multnomah County Health Director Ebony Clarke moderated a panel of the Oregon Health Forum on Monday that provided advice to the next governor on integrating behavioral health care./screenshot

Oregon’s next governor should be bold, creative and open-minded, but not rash, when it comes to integrating bevavioral and physical health around the state, speakers at an Oregon Health Forum panel said.

“With new leadership at the state level in Oregon, however that may look, after the election day we will have an opportunity to work towards a common goal that's potentially new and different. And that’s OK,” said Ebony Clarke, director of the Multnomah County Health Department, who moderated the virtual panel on Oct. 31. Relaunching after a pandemic pause, the nonprofit forum is an affiliate of The Lund Report.

As three candidates vie for victory in the Nov. 8 election, the event featured three practitioners and two state lawmakers offering their thoughts to whoever wins. They said there are ideas worth pursuing, even at a time in which the health care workforcein Oregon and across the country is stretched thin.

Amy Baker, executive director of Clatsop Behavioral Health, said a focus on permanent supportive housing would serve the new governor well, as would more of a focus on spending wisely — as opposed to implementing burdensome accountability measures that keep providers from focusing on patients.

“I got tired of having clients who couldn’t access primary care services. So thanks to the flexibility of pandemic funding I hired my own doctor — a retired family medicine doctor who got tired of all the paperwork and all of that — and he works for us 10 hours a week. And what that’s done is that a lot of our clients don’t fit well into a 15-minute medical appointment: They need more than that, but the health care’s productivity requirements don't really allow for that. So he spends time explaining to clients what their diagnosis is, what they can expect from treatment. He helps consult with our staff.”

Baker added, “In terms of talking about integration, we can't just talk about putting behaviorists in primary care, we need to talk about reverse integration so that people with serious mental illness can get the physical health resources that they need.”

She said the next governor would find that “you have a lot of partners, and a lot of people want to roll up their sleeves and get this done and make a better health care system.”

Rep. Tawna Sanchez, D-Portland, told the audience she relished the question of “what would my advice be to the governor going forward: like: reality here, we have to invest. We have to invest in things that that we've missed and messed up and siloed and separated, because we thought we had to pay for it with a rate structure.”

She said reforms should “recognize the fact that we have designed these systems over years and generations, right? You know, and I don't know that we can necessarily deconstruct the entire thing, or, you know, pull different strings out of this massive bowl of spaghetti that we've created.

“But in reality, we have to decide whether or not we step in and say we have to change it. And really be realistic about how we go about doing that ... We have to recognize that we've sat in our silence in silos for a really, really long time, and it's really important that we figure out how do we move past it,” Sanchez said.

Melanie Henriksen, studied at Oregon Health & Science University to become a certified nurse midwife after obtaining her doctorate in naturopathy, then became president of the National University of Natural Medicine in Portland.

Henriksen said practioners have seen improvements using interdisciplinary, integrated models of primary and behavioral care, but “because we cannot find behavioral health providers at this point in time, we've recently really had to scale back and even suspend a lot of our interdisciplinary care resources, which is hard, I think, for any one of us, because we know that that need just keeps increasing.”

She praised the regional coordinated care organizations of the Oregon Health Plan for supporting behavioral health, but said in general, the fee-for-service payment model does not align with the sort of co-located care that studies show saves money and improves outcomes.

She said employing such a system at the primary care level can inexpensively address the kind of problems that are not emergencies at the time but later can become acute and costly.

“That bachelor's level person, that care manager becomes the eyes and ears of the psychiatrist. They do a very thorough, structured, standardized diagnostic evaluation, but they're not doing the evaluating; they hand it over to a psychiatric consultant who reads it says this is the probable diagnosis, here are some ways to treat it. The (primary care provider) then meets with the patient and says, here's some ideas that our psychiatrist came up with, what sounds right to you.”

Fisher said the collaborative care model currently is not funded under the Oregon Health Plan because of its low ranking on the state's prioritized list of evidence-based cost-effective services, but she's hopeful that will change. “What Governor would not want to do this, right?” she said. “It's cheaper for the patients because they get better. But it's also cheaper for the system.”

Rep. Rob Nosse, D-Portland, offered blunt talk for the next governor, noting that he had served with all three candidates, and “I hope the three of you are listening." The head of the House Committee on Health Care, he said the next governor needs to tackle workforce issues by increasing compensation, training and diversity, as well as other obvious problems. “I need you to join with me in figuring out how we fix the problems that are at our state hospital, because it is the endpoint for a lot of these problems. And if we can get that solved, we can then fix the next level” — which he said was adding residential treatment facilities for mental health “all across the state.” He said the state's county-based community mental health programs needed more funding as “the foundational system” of behavioral health.”

He predicted the state's new 988 system would help organize Oregon's behavioral health care, but would need funding to do so: “You better start thinking about how much cellphone tax you can stand because we're going to need to pay for that system.”

Nosse rejected the notion of repealing Measure 110, saying that instead “It needs to be reworked, reformed in terms of its operation, its scale, what it's permitted to do, how it works with other behavioral health entities.”

He also recommended the next governor give serious consideration to the idea of a single-payer universal health care plan, to determine how it could work. “It's not enough just to design a universal system that everyone will have access to, with all the kinds of care they need. We have to figure out a way to finance it.”

Nosse recommended the next governor lead the Legislature to keep the kicker, which could run as high as $3 billion, rather than return it to taxpayers, and invest it in needed improvements to the system.

Citing the ideas of his colleagues on the panel, he said, “All of this costs money, Governor.”

Nov 1 2022
News source:
The Lund Report
Keywords:
state health policy, behavioral health
×
This article is for premium subscribers. If you are one, please sign in below.
You can see two more premium stories for free. To subscribe, click here. We depend on premium subscriptions to survive, and they are tax deductible.
Sign InGo Premium Not now