John Kitzhaber as governor in 2014.jpg 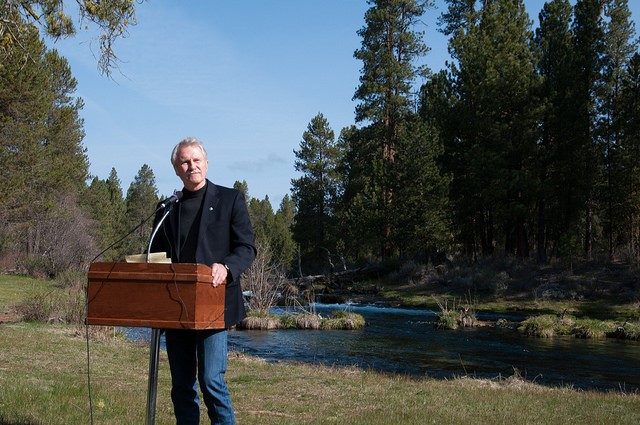 Former Gov. John Kitzhaber is adding his voice to the dialogue about Ballot Measure 111, saying it falls short of what Oregonians need for their health.

A former emergency room physician, Kitzhaber was instrumental in Oregon’s shift to the coordinated care model for the Oregon Health Plan, which serves 1.4 million low-income Oregonians.

The ballot measure, if passed, would enshrine the right of Oregonians to affordable and clinically-appropriate health care in the state constitution. It also requires lawmakers to balance health care with other state budget needs.

“I just think it’s the wrong debate,” Kitzhaber told The Lund Report, adding that guaranteed health coverage doesn’t necessarily address society’s real needs. He said the measure is focused on, “Let's just get everybody covered, right? It doesn’t question the inefficiency, the waste, the perverse incentives in the system, it just continues to pay for them … Just being covered doesn't necessarily make you healthier.”

The stance by Kitzhaber is notable given his stature in Oregon’s health care system. More than a decade ago he spearheaded Oregon Health Plan reforms that led Modern Healthcare magazine to name Kitzhaber the country’s second-most influential person in health care in 2013. Last month he gave the keynote address at the annual conference for CCO Oregon, named for the OHP regional coordinated care organizations that he pioneered.

Kitzhaber, to be sure, wants all Oregonians to have access to health care. But he says reforms need to curb the waste in the system, not just ensure the costs of that wasteful system are covered by the Oregon budget. He also said Oregonians need to understand the difference between access to the health care system and overall health, including the social determinants like affordable housing, nutritious food and safe neighborhoods.

On Oct. 18, Kitzhaber laid out his case for why the ballot measure doesn’t get Oregon to where it needs to be in an op-ed published in the Portland Business Journal. He went into more detail in an interview with The Lund Report.

Kitzhaber pointed to the soaring health care costs for the nation and Oregon, even as health statistics are “embarrassingly poor” compared to other industrialized nations.

“We somehow have to change the focus and the focus to me really needs to be health, not health care,” Kitzhaber said in the interview.

The state needs to focus on those upstream issues that can impact health, which the ballot measure doesn’t do, Kitzhaber said.

“I actually think you should be able to include adequate food as part of the coverage piece,” Kitzhaber said.

Kitzhaber said that the ballot measure doesn’t address the health care delivery system, which continues to grow in cost and be the problem.

“The system itself is unsustainable,” Kitzhaber said. “We need to rethink the financial incentives within the system.”’

Passed by the Legislature in 2021 as Senate Joint Resolution 12, the ballot measure followed years of debate. The late Rep. Mitch Greenlick, a longtime Democratic lawmaker and former chair of the House Health Care Committee, for more than a decade tried to get a similar measure passed before he died in 2020.

The measure continues to be supported by prominent lawmakers, including Sen. Elizabeth Steiner Hayward, D-NW Portland/Beaverton, a physician who sponsored the 2021 legislation, and Rep. Rob Nosse, D-Portland, chair of the Interim House Health Care Committee. The Oregon Nurses Association and a range of health care providers also support the ballot measure.

Kitzhaber said Greenlick was a “dear friend” and they agreed that everyone should receive coverage. At the same time, he said, “we would go around and around on this about coverage,” which isn’t the same as health.

In his op-ed, he wrote: “It seems counterintuitive to create a constitutional right to access a medical system within which the economic incentives are aligned to a maximize revenue, rather than health, and which, by even the most conservative estimates, wastes at least 25% of each dollar is spends on low value care, over treatment, poor care coordination and over-pricing.”

Rather than simply a right to access the system, Kitzhaber wrote: “If we are going to amend the constitution, it would make more sense to create, as a fundamental right, ‘an equitable opportunity to be healthy.’ This would imply that every Oregonian has the right to access some basic, defined level of affordable, effective, quality medical care — but also to affordable housing, nutrition, a clean environment, a safe neighborhood, a good education, and a living wage job. Making access to medical care a fundamental right, without effectively addressing equity and opportunity in accessing the social determinants of health, will undermine, rather than enhance the health of our society.”

Oct 20 2022
News source:
The Lund Report
Keywords:
state health policy, measure 111, john kitzhaber
×
This article is for premium subscribers. If you are one, please sign in below.
You can see two more premium stories for free. To subscribe, click here. We depend on premium subscriptions to survive, and they are tax deductible.
Sign InGo Premium Not now