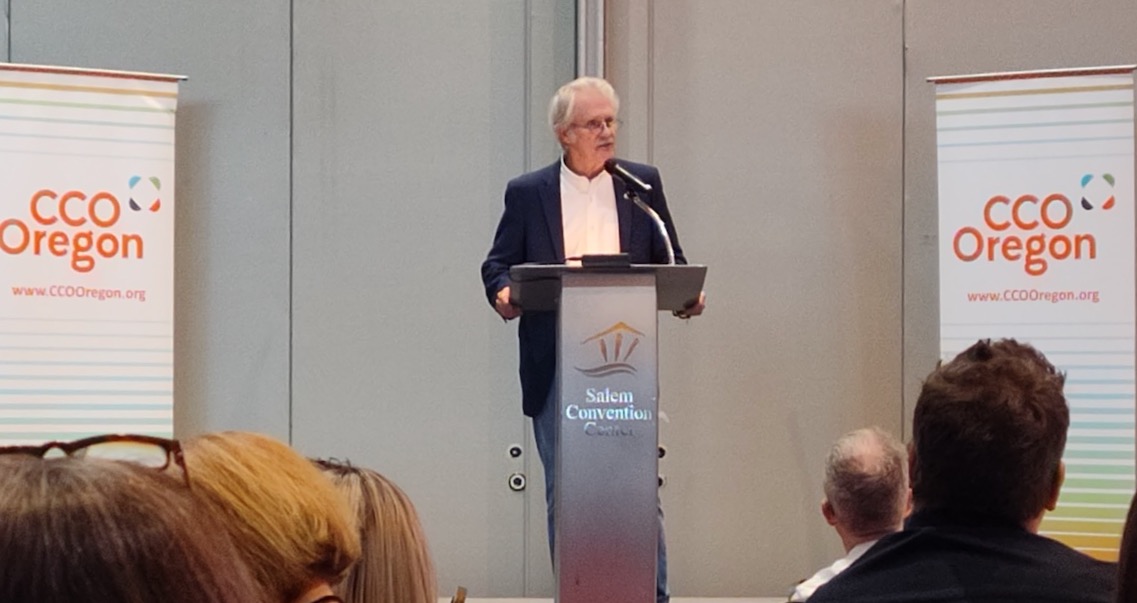 The former Democratic governor was the keynote speaker for the annual conference for CCO Oregon, which has a membership that includes a range of health care providers, including hospitals and clinic systems, behavioral and oral health organizations, and coordinated care organizations that serve the Oregon Health Plan. Almost 300 people from the organizations, health care providers and other groups gathered in person at the Salem Convention Center for the first time since 2019. During the pandemic, the conferences were virtual.

Kitzhaber played a central role in setting up the  coordinated care organization model. Since 2012, they’ve contracted with the state to provide care to Oregon Health Plan members in designated regions of the state. The state reforms were hailed around the country, leading Modern Healthcare magazine to name Kitzhaber the country’s second most influential person in health care in 2013.

On Thursday, Kitzhaber urged the group to take swift and united action to address the growing health care crisis in Oregon.

“We gathered this morning in the shadow of a gathering storm that's driven by an acute workforce shortage, a hospital discharge problem and the growing realization that the cost structure and business model … is simply no longer sustainable,” Kitzhaber said.

Kitzhaber pointed to the current hospital capacity crisis, which includes nearly 500 people in hospital beds who could be discharged but have nowhere to go, and 262 people waiting in emergency rooms for a hospital bed to open up.

A legislative panel appropriated nearly $40 million in emergency funding to bolster staffing and finances at hospitals and long-term care facilities where patients can go after discharge. Kitzhaber reminded the group that the money is just a six-month fix – not a long-term solution.

That means another answer will be necessary in March 2023, as lawmakers are balancing the budget during the session.

“This storm is going to land on your beach,” Kitzhaber said. “Time is not our friend right now.”

Kitzhaber said players including labor, payers and providers need to keep consequences across the system in mind as decisions are debated.

Saying the CCO model has faced stresses in the last several years, he also took aim at the Oregon Health Authority, saying it “has become less of a full partner” and more of a regulator.

Leaders should learn lessons learned from Oregon’s advances a decade ago, including a willingness to work across political lines and take action even in the midst of an economic downturn, Kitzhaber said, noting that other states bumped people off Medicaid during the Great Recession.

The recent trend of falling revenues and escalating labor costs is unsustainable, but we’ve been “politically unwilling to make a choice to solve it,” Kitzhaber said.

“It’s a structural problem, and it’s not going to to get better until we change the structure of the business model,” Kitzhaber said.

Kitzhaber said that he’s not suggesting health care workers get paid less or that policymakers avoid discussions about hospital staffing ratios. Instead, those conversations should not happen in isolation, he said.

With a more holistic approach, he said, “I believe we can leverage this crisis into a remarkable long-term sustainable solution.”

I agree we need a different model.  We need to get profit motive insurance companies out of healthcare. It does no healing, it denies care to make profit,  it stands between providers and patients, it leads to inflation in the medical care industry.  We need Universal Healthcare.