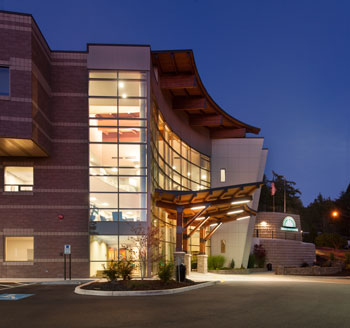 This is from The Lund Report's 2014 look at hospitals. It has been re-printed as we revisit these hospitals in 2015. The most recent report is available to premium subscribers.

Whether the care they provide is good, bad or indifferent, Oregon’s public hospital districts play a vital role in the state.

These taxpayer-owned public entities are located in rural communities where the next-nearest option is usually a long drive away. They provide critical emergency rooms, labor and delivery services, outpatient appointments, and inpatient care. And they face unique challenges that separate them from their urban and larger town peers: It’s hard to recruit doctors to remote regions of the state; small institutions with limited budgets can’t afford the same resources as larger institutions; and changes to their reimbursement system could add new uncertainty in the future. This story is the tenth in a series of articles in which The Lund Report aims to examine more than 50 hospitals licensed to operate in the Oregon.

These stories look at profit margins, hospital size and reach, and the history and recent challenges facing these major health care institutions.

Most previous stories in the series also included executive compensation, obtained by reviewing nonprofit tax filings. The hospitals in this series are government agencies, not nonprofits, making pay figures more difficult to obtain. Click the accompanying spreadsheet to view the figures we’ve compiled.

Today’s examination of the 10 Oregon hospital districts that continue to operate independently is the final story in the first stage of the series. Now that we have looked at the facts and figures, The Lund Report is preparing to launch stage two: a look at the issues. The next stories will tackle difficult questions about public policy and hospital financial health. We’ll examine a recent Oregon Education Association analysis of hospital costs. We’ll look at how hospitals are paid by Medicare, Medicaid and private insurance – and why that matters to the bottom line. And we will tackle other big-picture issues facing hospitals in the state.

Bay Area is the largest hospital on the Oregon Coast, and the largest of Oregon’s public district-operated hospitals.

Its origins lie in a 1952 Coos County vote to create the Bay Area Health. By the early 1970s, community members wanted to replace two older hospitals, Memorial and McAuley, according to a history on Bay Area’s website. Though the health district has issued bonds several times to fund expansions, in recent decades it’s funded its own growth rather than turning to taxpayers.

In 2013, Bay Area completed a $45 million expansion that brought in improved technology, more beds and a new cardiologist – plus room for future growth. But that has not been enough to keep some community members from grumbling publicly about the care they receive, with online complaints focused heavily on emergency room wait times.

Bay Area Hospital has the highest readmission rate in Oregon, according to a measure of how many patients are readmitted within a month of being discharged. Under new Medicare guidelines aimed at rewarding quality care, that means Bay Area will take a financial hit. Medicare will pay the hospital about $300,000 less this year because of quality penalties, according to The Coos Bay World newspaper.

The current 48,000-square-foot Blue Mountain Hospital was built in 2001 to replace an older 1959 building, and that expansion was paid for with a $7 million tax levy. According to bond documents, about 8 percent of the hospital district’s revenue comes from property taxes, with 89 percent dependent on service charges and the remaining 3 percent from other sources.

CEO Robert Houser has been at Blue Mountain since May 1999, through a contract with HealthTech Management Services, a national company that provides healthcare management expertise.

As is common with rural hospitals across the country, recruiting and retaining physicians has been a challenge at Blue Mountain Hospital. Two doctors left unexpectedly in 2013, and the hospital was short-staffed through much of the year. Last year proved financially challenging for the institution, with operating revenue declining as patient volumes dropped and supplies and other costs going up.

The Coquille Valley Hospital District is owned by the residents of Coquille and its immediate surroundings, but it serves a much larger geographic region, providing care to a population of about 13,000 in Southwest Oregon.

Coquille Valley Hospital is located within a federally designated health provider shortage area. But a heavy focus on recruitment – though challenging – has benefited the institution in the past year. With a more predictably and consistently staffed emergency department, emergency room visits climbed 11.5 percent in one year, according to bond documents.

Another challenge for Coquille Valley: The age of its population. Medicare patients account for more than half of its payments. And this share of its surrounding population is growing at more than twice the population growth rate of people under age 65. Hospital leaders worry that this could worsen the financial squeeze they already face today.

Coquille Valley gets a relatively small amount of its annual revenue from taxes - about $645,000 per year in a $35 million budget.

In 2012, it replaced its 43-year-old hospital building, opening a new hospital that offers 52,000-square-feet of patient service space.

Though Curry General Hospital was founded in Gold Beach more than 60 years ago, the Curry Health District has only been operational since 1983. Today, that district also owns clinics and an assisted living center, and in Brookings it operates a psychiatric office and a surgery center.

Curry General Hospital serves a population base of about 22,000. This April, it selected Wisconsin-based Erdman Co. to design and build a new $20 million building. The final design has not yet been determined, but Curry General executives hope to finish construction by 2016.

On the health district’s website, CEO Andrew Bair spells out the hospital’s challenges and aspirations: “Of course in a facility our size we cannot provide all the specialty care one can find in larger facilities, but you will be surprised at just how much we can do. We provide a comprehensive range of basic healthcare needs for our community and continue to seek ways in which we can add to our current primary care base. We feel that by providing care here in town, you have better support from those close to home during your hospitalization.”

In 1989, community members began looking into what it would take to keep the hospital intact and recruit doctors. Their conclusion: A hospital district, which was created the following year.

In 2008, Harney District Health finished construction of its current hospital building. In 2011, it joined the Oregon Health Network, allowing it to take advantage of telemedicine networks that can connect Harney to distant medical specialists.

Today, the hospital serves a population base of about 8,000 people spread across 10,000 square miles. It is 135 miles away from the next closest hospital.

CEO Jim Bishop has said he plans to retire in August 2015, spurring a search for his replacement that is currently underway.

Lakeview’s first was built in 1913 as Lakeview General Hospital. It changed ownership several times over the following decades, until Lake District Hospital was completed in 1970.

In 2013, it participated in a community partnership unusual for a healthcare institution: An investment in geothermal energy.

First, Lake Health Hospital underwent an extensive remodel so that it could accept a new source of heat. Then it partnered with four community schools to make use of a geothermal well. At a cost of $3.7 million up-front, the hospital and schools are now heated using 185-degree water. The heating system has won national awards, and its proponents hope to reap significant energy saving from their investment.

Lower Umpqua Hospital was opened in 1964 with the help of federal dollars, individual donations, lumber company contributions and tax funds. It has expanded services and undergone remodels several times in the intervening years.

The most significant recent hospital expansion was completed in 1998, and included the addition of a radiology suite. In 2000, Lower Umpqua Hospital District opened a new medical office building. It implemented an electronic health record system in 2011, and acquired a physicians’ practice in 2013.

In January, the hospital opened a walk-in clinic with extended hours. Hospital leaders hope the clinic draws patients who would have otherwise either turned to the emergency room or skipped medical care altogether.

Pioneer Memorial Hospital opened in 1950, and was previously operated by Morrow County. Then in 1994, local voters chose to create one of the state’s newest health districts.

This May, Morrow County Health District successfully convinced voters to renew their tax support for its programs, winning 79 percent of the vote. According to information posted on the district’s website, funds will be used to buy ambulances, implement electronic health records, and upgrade the hospital’s cardiac monitoring system.

Bandon-based Southern Coos Health District was founded in 1955 by a public vote, and its first hospital opened in 1960. Today’s Southern Coos Hospital & Health Center opened In 1999.

In May, the health district accepted bids to build a new physician clinic, which would allow physicians to operate closer to the hospital while more than doubling their space.

In 1992, a public vote created the Wallowa County Health Care District. Already, local leaders were urging upgrades or a massive remodel. In 2007, the health district opened its new $23 million hospital.

Wallowa County Health Care District serves about 3,150 square miles in Oregon along the Washington and Idaho borders, an area inhabited by 7,000 people. The next nearest hospital is in LaGrande, nearly two hours by car on mountainous roads.