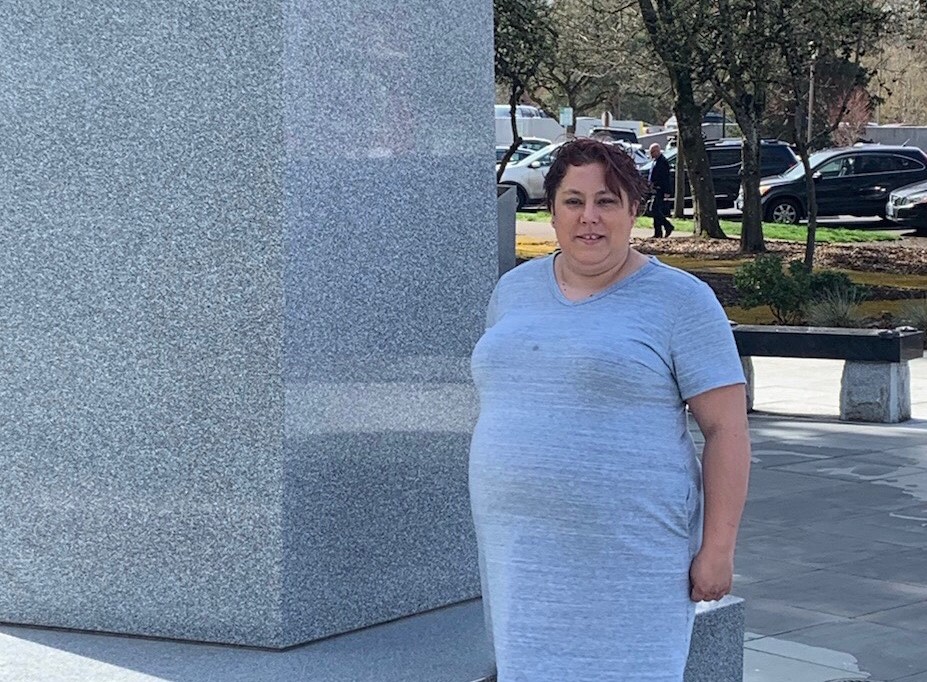 Hollie Murphy filed for bankruptcy after a surgery because she couldn't get charity care./SEIU Local 49

Hollie Murphy had a hysterectomy in 2013 that threw her into financial turmoil.

She had health insurance. She was a certified nursing assistant at Springfield’s PeaceHealth Sacred Heart Medical Center at RiverBend. But it was a high deductible plan, and she only made $15 an hour.

“When the medical procedure happened, I struggled to bring home $500 a month,” Murphy told Oregon lawmakers on the House Committee on Health Care last week, testifying about House Bill 3076. The bill would set new standards for hospitals across the state to cover medical costs incurred by low-income Oregonians who aren’t reimbursed by the patient’s insurance or the Oregon Health Plan.

After her surgery, Murphy applied to PeaceHealth for charity care. But officials told her she didn’t qualify. She made too much money.

Two years later, Murphy filed for bankruptcy. She said she survived thanks to the help of her mother and sister.

“Just because we have insurance doesn’t mean we can afford the cost of insurance,” Murphy told lawmakers. “It’s not fair that we have to pay $290 per month for our premiums, and we still can’t afford care. … People are drowning in medical debt, and hospitals need to do their part.”

Critics say regulations should set charity care standards to ensure that hospitals are doing their part.

Those backing House Bill 3076 include the Portland-based Service Employees International Union, or SEIU Local 49, which represents thousands of Oregon and southwest Washington health care workers. The bill is sponsored by Rep. Andrea Salinas, D-Lake Oswego, the chair of the House Committee on Health Care.

“If we can prevent even one family hardship through bankruptcy, this will be a success,” Salinas said.

But Oregon hospitals have pushed back against stricter charity care requirements. They are lining up against HB 3076, arguing the bill would set up burdensome mandates and hamper their ability to provide discounted care for patients.

The bill would make several sweeping changes to Oregon charity care law. If passed, it would require the Oregon Health Authority to set spending floors for hospitals to meet or potentially risk their nonprofit status. Spending floors would be set based on factors like annual profits at hospitals.

Hospitals also would be required to cover the health care costs of patients earning up to 200 percent of the federal poverty level – up to $24,980 for an individual or $51,500 for a family of four. Hospital bills would be capped at 10 percent of a patient’s annual income for those earning up to six times the federal poverty level, with the hospital covering the rest.

Other changes would require hospitals to post eligibility requirements for free or discounted services online, cap patient debt interest rates and prohibit a deceased patient’s debt from being passed on to relatives.

Executives with Samaritan Health Services and Providence Health & Services in Oregon said they’ve funded charitable services for decades that could be jeopardized if they have to meet blanket standards imposed on hospitals.

But Felisa Hagins, political director of SEIU  Local 49, said many other hospitals fail to meet the community support standards despite enjoying rising profits in recent years.

“I firmly believe that not every health system is meeting the standards just outlined by Samaritan, Kaiser and Providence. I know that not to be the case,” Hagins said. “So can we set some sort of standard as a community that says, ‘This is what makes you a nonprofit hospital?’”

The House health care committee is likely to vote on the bill during a work session on Tuesday. Salinas indicated there could be amendments to it.

But Mitch Greenlick, D-Portland, the longtime committee chair who was removed from the chairmanship earlier this session after making rude comments to speakers, questioned whether advocates for the bill and hospital officials have come any closer to agreeing on a plan.

“Sometimes in the legislative process, you work hard and get to a compromise where everybody gets something and no one gets everything,” Greenlick said. “But sometimes there are no compromises, it’s irreconcilable. It’s my impression that we’ve reached that point now on this issue.”

Apr 1 2019
News source:
The Lund Report
Keywords:
seiu, charity care, Senate Bill 3076, hospitals
×
This article is for premium subscribers. If you are one, please sign in below.
You can see two more premium stories for free. To subscribe, click here. We depend on premium subscriptions to survive, and they are tax deductible.
Sign InGo Premium Not now