The sheer weight of scientific evidence has far exceeded reasonable doubt, and it’s difficult to see how the EPA, or anyone else, can continue to believe that water fluoridation is safe, according to the author.
By:
Rick North 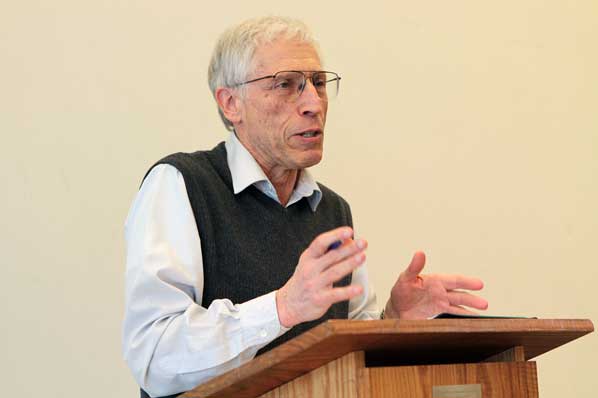 The petition cites 196 peer-reviewed studies published over the last ten years, including over 2,500 pages of supporting documents. Out of 61 human studies, 57 found that fluoride caused harm, including behavioral problems and lowered IQ in children. Out of 115 animal studies, 112 found harm. Out of 17 cellular studies and three reviews, all found harm.

These eye-opening numbers may be a revelation to most of the health and medical community, but significant evidence on fluoride’s neurotoxicity has been building for years.

The National Research Council (NRC) of the National Academy of Sciences published Fluoride in Drinking Water, a 507-page review of over 1,000 studies that took three years to complete. Compiled by a blue-ribbon committee of 12 leading scientists, it’s considered the most comprehensive, authoritative resource ever written on the subject.

The NRC’s objectives were to assess if the maximum level of fluoride allowed in water, 4 parts per million (ppm), was safe (it determined it wasn’t) and assess fluoride’s toxicity in general, including its risk in relation to total exposure. It linked fluoride with known or possible health risks, including endocrine disruption, fluorosis, kidney and thyroid disease, diabetes and bone fractures, among others.

It was unequivocal on neurotoxicity: “it is apparent that fluorides have the ability to interfere with the functions of the brain . . .“ In addition to numerous animal studies, it cited five Chinese studies linking higher levels of fluoride in water with lowered IQ in children. The studies varied in quality and detail, but the NRC concluded “the consistency of the collective results warrants additional research . . .”

Following the NRC review, several scientists on the committee openly voiced their opposition to fluoridation. To quote just two, the late neurobehavioral science specialist Robert Isaacson, PhD, said “I had no fixed opinion on whether or not fluoride should be added to drinking water . . . The more I learned the more I became convinced that the addition of fluorides to drinking water was, and is, a mistake.” Hardy Limeback, DDS, PhD, both a scientist and former head of preventive dentistry at the University of Toronto, said “In my opinion, the evidence that fluoridation is more harmful than beneficial is now overwhelming.”

This Harvard-funded meta-analysis led by Anna Choi, PhD and published in Environmental Health Perspectives found that children in China exposed to higher levels of fluoride tested lower for IQ in 26 out of 27 studies. The average difference was significant - 7 IQ points lower. Potential confounding causes such as lead and arsenic were noted in some studies, but controlled for in others, and the authors determined that “it seems unlikely that fluoride-attributed neurotoxicity could be due to other water contaminants.”

The Harvard meta-analysis was further reinforced by a study published in The Lancet by Philippe Grandjean, MD and Philip Landrigan, MD. In 2006, their first review identified six chemicals as known developmental neurotoxins (harming the brains of children), including lead, arsenic and PCB’s. Their 2014 study named six more. Fluoride was one of them. These chemicals are especially dangerous because they can cause brain damage that is often untreatable and permanent, including behavioral problems and lower IQ.

The authors are world-renowned. Grandjean is a Harvard professor of environmental health, head of environmental medicine research at the University of Southern Denmark and toxicology advisor to the Danish National Board of Health. Landrigan is a professor at the Mt. Sinai School of Medicine and previously worked for the Centers for Disease Control and National Institute for Occupational Safety and Health. He was awarded the Meritorious Service Medal of the US Public Health Service.

In the face of this compelling and continuously growing body of evidence, promoters still argue that fluoridating water is safe for everyone. This ignores three indisputable facts. First, standard toxicology (and the EPA’s own guidelines) requires consideration of individual variability by taking the lowest dose or level showing harm and dividing it by at least 10 to determine a safety level protecting more vulnerable subgroups in a population. This lowers the bar far below current fluoridation practices.

Dose is the second factor, because toxin levels are only half the equation determining risk. Children, for instance, typically consume more water per pound of body weight than adults. The EPA petition documented that some children drinking just two liters of 0.7 ppm fluoridated water a day were at risk of significantly lowered IQ. Other subpopulations, like kidney disease and diabetic patients, athletes and manual laborers also drink higher amounts of water, increasing their health risks.

Third, apologists ignore other sources of fluoride, including children’s all-too-familiar swallowing of fluoridated toothpaste. Environmental exposure is common, such as in pesticide residues and air pollution. Intel, for example, was fined $143,000 in 2014 for illegal fluoride emissions in Hillsboro, and industrial discharges of fluoride, even when legal, are widespread throughout the country. Finally, anything made with fluoridated water, such as soft drinks, baby formula and processed food, can add significantly to our toxic load.

Whatever phrase is used, “First do no harm,” “Better safe than sorry,” “The Precautionary Principle,” etc., most would agree that if there’s reasonable doubt if a substance is safe, the public shouldn’t be intentionally exposed to it.

Considering all the recent neurotoxicity studies – not to mention fluoride’s other NRC- identified health risks - the sheer weight of scientific evidence has far exceeded reasonable doubt. It’s difficult to see how the EPA, or anyone else, can continue to believe that water fluoridation is safe.

Rick North is a retired executive for several non-profits. He’s the former executive vice president (CEO) of the Oregon American Cancer Society and former project director for the Oregon Physicians for Social Responsibility. He can be reached at [email protected].

I am really surprised that The Lund Report publishes opinions from Rick North.  EVERY public health professional knows community water fluoridation is (and has been for over 50 years) the most effective method for reducing dental carries. Allowing Mr. North to cite flawed studies from China does not change the facts.  For more information based on real science visit americanfluoridationsociety.com           Gary Lahman MPH, Newport, Oregon

Fluoridation is a Failed Concept

The American Fluoridation Society is a pro-fluoridation lobbying group which has no valid science to back up any of its claims. They are funded by Delta Dental which spends millions of dollars promoting, instigating and funding fluoridation schemes across the US

Modern science indicates that ingesting fluoride is ineffective at reducing tooth decay and harmful to health, especially to the nervous system http://www.FluorideAction.Net/issues/health.

According to the CDC:   “In the earliest days of fluoride research, investigators hypothesized that fluoride affects enamel and inhibits dental caries (cavities) only when incorporated into developing dental enamel...” but now CDC admits that: “Fluoride works primarily after teeth have erupted…”

Fluoridation began at the beginning of the last century without research into fluoride's neurological effects.  Now that we know fluoride gets into the brain, where it doesn't belong, that should be enough to bring an end to fluoridation.

And there are  now 100's of animal studies and at least 50 human studies proving fluoride gets into the brain and can cause harm.  This alone should be fluoridation's death knell.

Unfortunately, politics keeps fluoridation alive.  Science buried it long ago. History will reflect on  fluoridation as one of the biggest public health blunders of all time.

Have we lost the art of thinking? Of science?

I know Rick. He is bright and honest and clear and was and is convinced of the harm of fluoridation because of the science. Because of the facts.

If you have children or grandchildren, and are wondering what is happening to the health and minds of our kids, here is one.

A smile comes from more than just white teeth. Your child will have an even better smile.

Gary,  While listening to Chuck Todd of Meet the Press have a spirted discussion with KellyAnn Conway last Sunday morning, Ms. Conway introduced me to a new two-word phrase: "Alternative facts".  That describes Rick North and you to a tee.

Early in the 1970s I voted for water fluoridation in Marin County California based on my perusal of the voters' pamphlet list of fluoridation endorsing organizations and the absence of convincing evidence from fluoridation opponents.

After relocating to Portland, I again encountered a fluoridation vote in 1978. This time, I suspected there may be something to the controversy, and I reviewed the primary evidence in the medical and dental school libraries. I was shocked to learn that (even back then) peer-reviewed evidence did not support fluoridation, and consequently, I have been involved in the debate ever since.

If you haven't reviewed the actual evidence, I suggest starting with the 2006 report, Fluoride in Drinking Water, from the blue ribbon reviewing panel of the National Research Council, available free online (read only). The NRC panel found concerning evidence connecting fluoride to adverse effects on the brain, thyroid, bone fractures, bone cancer, dental fluorosis, bone fluorosis, endocrine system, kidney, pineal gland, and diabetes. The panel charged the US EPA with reducing allowable fluoride in drinking water due to the peer reviewed evidence of the adverse effects of fluoride.

Because the EPA had not yet acted on this public health need in over ten years, a petition was recently submitted to force them to proceed, as Rick North so clearly presented.

Since 2006 there has been an avalanche of more and stronger evidence of adverse effects (IQ loss of seven IQ points, ADHD increases, thyroid damage, bone cancer, etc).

In addition, it is now known that fluoride can be effective in tooth decay reduction when used topically (toothpaste, mouthwash, dental treatments); but it is not effective when swallowed (tablets and water fluoridation).

Any party who continues to claim that fluoridation is 'proven safe and effective' in the face of the overwhelming scientific evidence to the contrary is only revealing that they have not seen the peer reviewed evidence, or worse, they have seen it and are ignoring it for reasons of personal gain. At least one of responders above has a well paying job that depends on promotion water fluoridation.

I can assure you that none of the opponents of fluoridation personally gains anything financial from it. Actually, Rick North, I and other fluoridation opponents often contribute considerably of our own time and personal resources to the advocacy based on rigorous and correctly interpreted science.

I call for full disclosure of personal gain from those advocating for fluoridation before we accept their views as valid.

Despite dental dogma and disparaging comments from disgruntled dentists - fluoridation is not safe. It's not effective either, but frankly I don't care about that because it is immoral to put any substance, let alone a poison, into municipal water in order to dose a person especially when that substance is known to harm some consumers.

Fluoridation is medically contraindicated for many with inflammatory, immune system, thyroid and kidney disease. And as Rick North states, it is ill advised for pregnant women & their fetuses or bottle-fed babies & young children. Ditto for senior citizens who like babies and fetuses are particularly vulnerable to neurological effects.

Fluoridation is a false dilemma. Anyone who doesn't think brushing with it is enough can buy a gallon for a buck, while it is expensive and ultimately impossible to avoid for those with medical conditions when it's in municipal water.