State: Oregon Hospitals Must Disclose When They Ration Care 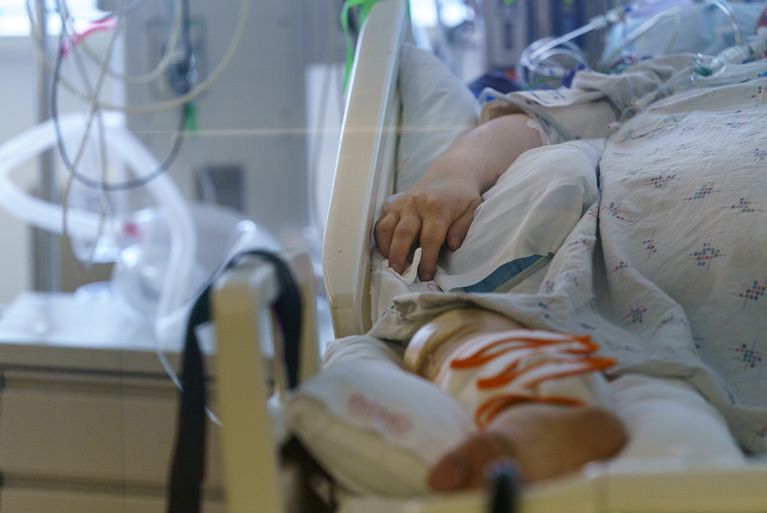 Last August the intensive care unit at Oregon Health and Science University was filled to capacity./Kristyna Wentz-Graff/OPB
Anticipating a spiking need for ICU beds, ventilators and other emergency resources at Oregon hospitals, the state has

issued a rule requiring hospitals to alert the public when they begin rationing crisis care, and to disclose how they decide who gets intensive special care and who doesn’t.

The move, which is labeled as temporary, follows the state’s issuance on Friday of a model “crisis standards of care” decision-making document meant to prevent discrimination against patients who are elderly,  disabled, from minority communities or suffer from chronic illness, when hospitals decide who is prioritized for intensive special care.

“Hospitals are having to address the surging rates of hospitalization and consider making triage decisions regarding allocation of patient care,” according to the Oregon Health Authority’s announcement of the temporary rule. Triage is the process of ranking each patient to determine the order of treatment if there are many patients waiting for care.

The rule said that if a hospital “is experiencing a resource constrained period and has to make triage decisions for patient care,” it must:

The rule takes effect Jan. 17 and will remain in place through July 15, the state said.

The state doesn’t mandate the precise decision-making protocol that hospitals must use. So, each hospital with an ICU and other crisis resources, such as ventilators and extracorporeal membrane oxygenation equipment — or ECMO — have their own procedures. The state says the decision-making procedures must follow state and federal anti-discrimination law.

Advocates for the disabled and elderly earlier this week lauded the state’s new crisis standards of care model, but they urged the state to go further and require hospitals to disclose when they are rationing crisis care, and what decision-making methods they are using. Tuesday’s temporary rule appeared to be a big step in satisfying that request.

The Oregon Association of Hospitals and Health Systems declined to comment Wednesday on the temporary rules.

Advocates for people with  disabilities and from other vulnerable groups fear that some hospitals may use the fact of a patient’s advanced age, pre-existing chronic illness, or developmental disability, to push that patient down the priority list for crisis care. They fear that some hospitals may judge that such patients would have a poor quality of life after discharge, or might, even after recovering from their current illness and being discharged, have only a short life-span afterward. Such considerations illegally discriminate against those patients, advocates say.

Some expect the new omicron variant will exceed that peak. ust how close Oregon hospitals are to rationing crisis care again, however, is unclear.

According to the Oregon Health Authority COVID-19 dashboard, the state had 34 of 653 adult ICU beds available on Jan. 12, and 17 of 41 pediatric ICU beds available, as well as 861 ventilators available. The dashboard said 62 patients were on ventilators, all of them COVID-positive. The dashboard also said there were 756 COVID-positive patients in Oregon hospitals. The Oregon Health & Science University is forecasting that will rise to more than 1,600 patients by the end of the month.

The rule was issued even as advocates are at odds with the Oregon Health & Science University over its crisis care standards.

OHSU says it gives added weight to patients with poor education, employment and housing conditions – factors that are associated with chronic health problems -- but also includes a “tiebreaker” that takes into account “a patient’s prognosis of surviving longer than six months following discharge.”

“A person with a disability, a chronic illness or of advanced age can easily be deemed to be less likely than another person to live for an additional six months.  But no one knows for certain,” Gelser Blouin wrote.

An OHSU spokesperson said in an email that  the hospital is confident its protocols conform to the decision-making guidelines the state issued Friday.

Jan 13 2022
News source:
The Lund Report
Keywords:
crisis care, Oregon, hospitals, oregon health authority
×
This article is for premium subscribers. If you are one, please sign in below.
You can see two more premium stories for free. To subscribe, click here. We depend on premium subscriptions to survive, and they are tax deductible.
Sign InGo Premium Not now