Under SB 469, hospitals will be bound by the recommendations of their nurse staffing committees, which craft plans for staffing levels. The bill now heads to the Committee on Ways & Means to provide more funding for state hospital audits that hold hospitals accountable for compliance.
By:
Chris Gray 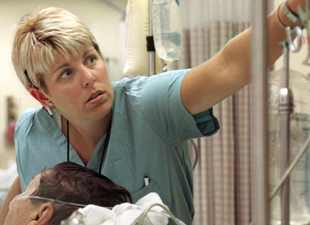 Oregon hospitals look like they’ll be facing a tougher nurse staffing law after the Senate Health Committee approved Senate Bill 469 unanimously on Monday, sending the bill to the legislative budget committee for further debate with only minor concessions to the hospital industry.

“I think you’ve done yeoman’s work to reach an agreement,” Sen. Laurie Monnes Anderson, D-Gresham, the Health Committee chairwoman, told lobbyists from the hospital association and the state’s leading nurses’ union. “You didn’t get everything you wanted but that means it was a good bill because you got consensus.”

The legislation would bind hospitals to the recommendations of hospital staffing committees, which collaboratively develop plans between management and labor for the number of nurses and support staff needed to safely provide care in each wing of the hospital at different hours.

Staffing committees by law are composed of an equal number of nurse managers and direct-care registered nurses, with one nurse for each speciality unit. A majority of committee members must be present to form a quorum, and managers and labor must vote in equal numbers.

The committees have existed for about 15 years, but giving their recommendations authority became a top priority of the Oregon Nurses Association when it became clear that many hospitals were not taking them seriously, as executive director Susan King told lawmakers in February: “The staffing committees have been ignored by hospital executives and budget makers,” King said, leaving many nurses overworked and putting patient safety at risk.

The Oregon Health Authority is supposed to audit the hospitals for compliance with current law, but in the last reported year only five hospitals were audited and some of the state’s largest hospitals have never been audited, including Sacred Heart Medical Center in Springfield and Legacy Emanuel and Legacy Good Samaritan hospitals in Portland. Curiously, Kaiser Sunnyside has been audited four times, and found to be in total compliance three of those times.

The bill is headed to the Committee on Ways & Means to provide the health authority with additional funding to conduct these audits. “We were aware of that,” said Jack Dempsey, a lobbyist for the Oregon Nurses Association. “We were ready to support getting them more money.”

The Oregon Association of Hospitals & Health Systems dropped its opposition after it won a concession from the nurses’ union. The amended version strikes language that allows the Oregon Health Authority to rely on quotas to set staffing levels if the two sides reach an impasse. Dempsey said that if an impasse does occur SB 469 calls upon them to enter mediation to reach an agreement.

Neither side wanted quotas. Hospital association lobbyists argued that California’s quota system was too prescriptive and hampered hospitals from adjusting to meet changing needs.

The nurses association representatives agreed -- noting that Oregon’s committee approach allowed each hospital to be more flexible in determining those levels than hard-and-fast state rules. The committee approach is a way to avoid more drastic measures like state quotas, according to the nurses union.