A Medicare index was scrapped, but physicians will no longer be able to go after patients when an insurer doesn’t pay for non-contracted emergency work. A sweeping measure allows state insurance regulators to set aside state law if federal officials upend the national health laws.
By:
Chris Gray 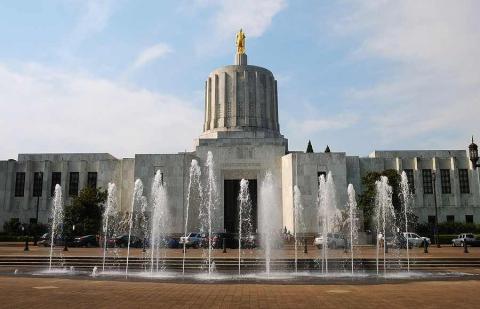 The Oregon Senate Health Committee on Tuesday cleared two insurance measures designed to protect consumers, one stopping physicians from “balance-billing” their patients, and the other giving state insurance regulators the power to avoid a collapse of the insurance market triggered by federal changes to the Affordable Care Act.

Both House Bill 2339 and House Bill 2342 were introduced by the Department of Consumer & Business Services, and both have generated plenty of debate and caused partisan lines to be drawn.

The Senate amended HB 2339 significantly, scrapping an index that would have tied non-contracted radiology and anesthesiology payments to a percentage of Medicaid, and setting up a work group for physicians and insurers to work out a deal by next February.

Patients have been rocked by huge bills when they unknowingly receive care from a provider who is not covered by their health insurance, and then that provider invoices them for charges that weren’t paid by the insurer. The problem occurs most often when a patient uses an in-network hospital but has anesthesia or medical imaging tests conducted by an out-of-network physician.

As of March 1, 2018, physicians will no longer be able to come after their patients and send them to collections if the insurer doesn’t pay -- any disputed payment will have to be settled between them and the insurance company on an ad-hoc basis until the Legislature can pass any recommendations from the new work group.

“That’s a great outcome for Oregon consumers,” Pat Allen, the director of the Department of Consumer & Business Services, told The Lund Report. “It’ll give us some time to work out some structure around payment arrangements.”

Physician groups and health insurers have fought all session over how best to handle this problem, with both sides accusing the other of trying to use the problem to gain leverage in contract negotiations.

The version of HB 2339 that passed the House capped any non-contracted work at 175 percent of what Medicare would pay. That prescription was favored by health insurers but hated by physicians, who were able to successfully lobby the Senate Health Committee to strip out the Medicare index.

HB 2342 was also amended to assure that the state cannot sweep aside civil rights protections or protections for people with pre-existing conditions as it sets aside laws to protect the market. The amendment also made clear that the state may not allow insurers to sell any new plans without the 10 essential health benefits outlined in the Affordable Care Act.

The Senate amendment comes after concerns from Paul Terdal, an activist for children with autism, that the state may use its power to allow insurers to get out of the expensive applied behavior analysis that he and Autism Speaks had fought hard to make insurers cover in the past five years.

“Without further guarantees that consumer rights to essential health benefits and coverage of preexisting conditions, this bill is simply too risky for consumers,” said Terdal, who supported the amendment.

Allen had never said that he would strip these elements from the insurance market, but the bill had given his agency the wide latitude to do so.

The newer version of Trumpcare that won over the far-right Freedom Caucus and passed the U.S. House of Representatives explicitly allowed states to strip essential health benefits from health insurance policies, with federal approval. This could leave some states with cheaper health insurance policies, but render them worthless for whatever health conditions get eliminated, such as behavioral health treatment, prescription drugs or maternity care.

HB 2342 allows the Oregon Division of Financial Regulation, which sets health and life insurance rates in the individual and small group markets, to ignore state laws in order to stabilize the market. The division would be allowed to set temporary rules for six months. The law itself expires in 2019.

“We are all dealing with enormous amounts of uncertainty, especially in healthcare,” Steiner Hayward said. “Confidence in our insurance market must be as stable as possible.”

Allen told lawmakers that HB 2342 was necessary in case a court order or “less likely, congressional action” causes dramatic changes to the market that force health insurance carriers to close up shop in part or all of Oregon.

Although House Minority Leader Mike McLane, R-Prineville, lambasted Allen for seeking the extraordinary provisions allowed in HB 2342, moderate House Republicans won a compromise with Allen, which Sen. Jeff Kruse, R-Roseburg, supported: “Even without new changes, nationwide, there are a lot of counties that won’t have insurance.”

Already in Oregon, the individual health insurance market is so unstable that three counties, including the state’s second-largest city, Eugene, will be down to just one carrier on the healthcare.gov marketplace, unless state regulators are successful at coaxing another insurance company to stay in Lane, Lincoln and Tillamook counties.