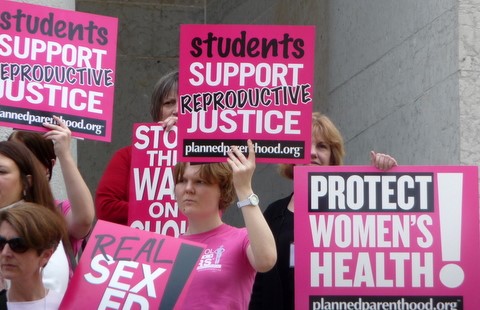 Oregon is stepping away from a federal program that pays for millions of dollars worth of reproductive care for low-income women over a Trump administration rule that bars health care providers from referring women for abortions.

in a letter Tuesday that it had stopped using Title X funds.

“Oregon cannot comply with the new regulations because doing so would require it to violate its own laws that prohibit it from interfering with or restricting benefits, services or information regarding a woman’s right to choose to terminate a pregnancy,” Shirley said in the letter. “In addition, the new regulations interfere with a health care provider’s ability to provide health care in accordance with accepted standards of care for reproductive health.”

The Trump administration had given states until Tuesday to detail how they would comply with the rule. Planned Parenthood announced on Monday that it was pulling out of the program altogether, foregoing $60 million a year in federal funds. Shirley said Oregon will maintain its status in the program but has stopped using the federal money.

“It is Oregon’s intention to continue as a Title X grantee as long as it can accomplish the primary mission for which the program was created – providing high-quality comprehensive family planning and preventative health services to low-income individuals,” Shirley wrote.

The rule marked a major victory for anti-abortion activists, who've been fighting for years to cut off funding for Planned Parenthood.

Oregon was on track to receive $3 million a year from the program for about 100 clinics around the state that serve tens of thousands of low-income and uninsured women. Planned Parenthood says it serves about 40 percent of the low-income and uninsured women in the state. An Oregon Health Authority spokeswoman, however, said only 10 percent of its clinics are run by the nonprofit. In Oregon, unlike many other states, Title X funds are administered by the state government.

Shirley said Oregon has not used any Title X money since July 15, the day that the Trump administration said the rule went into effect. After the rule was finalized in March, Oregon and other left-leaning states, along with Planned Parenthood and the Oregon Medical Association, went to court to try to block it. They won an injunction but that was overturned by the 9th U.S. Circuit Court of Appeals. The court has agreed to review the decision.

Until that happens, Oregon will not use any Title X funds.

“The agency intends to maintain this temporary status until an injunction is reinstated or there is final resolution to Oregon’s legal challenge to the rule,” the Oregon Health Authority said in a statement. “OHA remains committed to ensuring continued funding for comprehensive, high-quality reproductive health care. Clients seeking care at the Reproductive Health Program’s network of clinics will continue to receive the same high-quality, client-centered reproductive health services that have always been available.”

Oregon will plug the funding gap with money that's been earmarked for the agency for the state's reproductive health program.

"It's business as usual for us," said Kate Willson, a spokeswoman for Multnomah County.

An agency in California, which administers Title X funds there, plans to comply with the new regulations, according to a report in the Los Angeles Times. Clinics that receive Title X money can still perform abortions but they have to provide those services in a separate facility and they are not allowed to refer patients for an abortion. The U.S. government has long banned the use of federal dollars for abortions. Planned Parenthood said it would cost too much money for it to comply with the rule. It blamed the Trump administration for its decision to pull out. The Department of Health and Human Services countered by accusing agencies that withdrew from the program of abandoning their patients.

The 9th circuit will hear oral arguments on the injunction the week of Sept. 23.