For Oregon Parents, A Long Slog To Get Coverage For A Rare Condition

Sydney McCornack before and after treatment Courtesy Photos.jpg 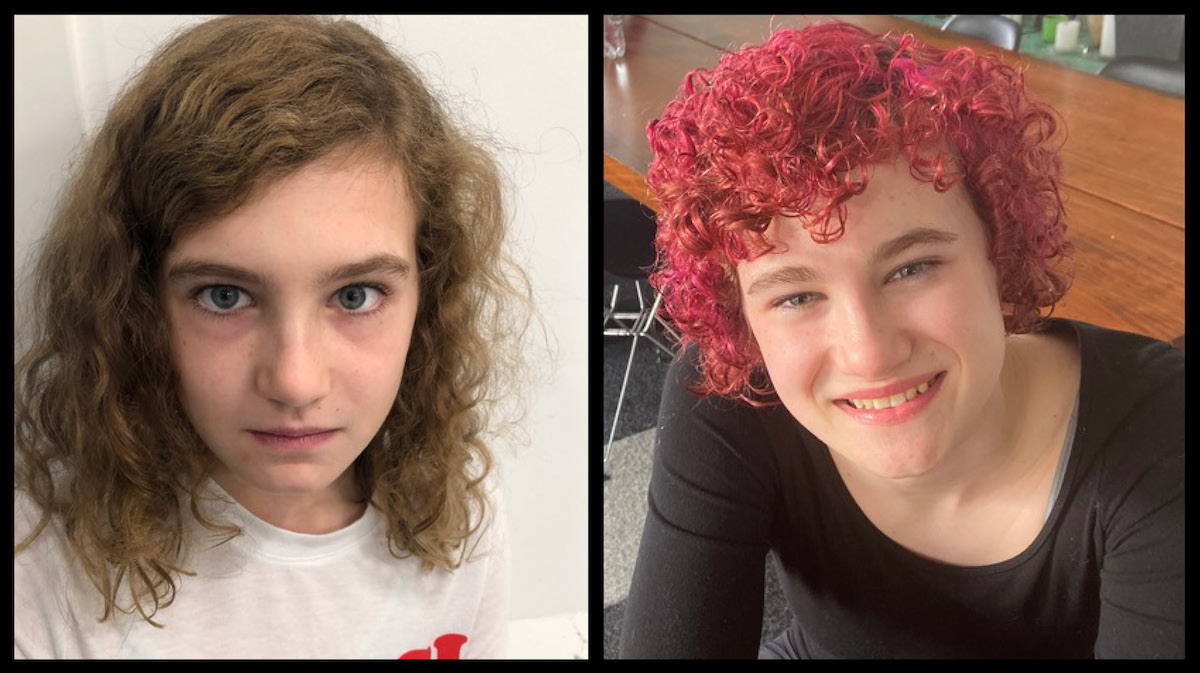 Sydney McCornack (left) of Portland during a PANDAS flare at age 11 and (right) in March 2022 as a 14-year-old./Courtesy of the McCornacks

After Carrie McGowan of Beaverton gave birth to her daughter, Bronwyn, the baby rarely cried unless she needed something.

That suddenly changed. When her daughter was about 2 ½ years old, she began to have “screaming, raging nightmares,” McGowan said.

During the day, her daughter began to scream and cry at floating specks of dust, mistaking them for bugs. Sometimes, the mother needed to soothe and hold her sobbing child on the sidewalk for 45 minutes to get her into the car.

“All of a sudden our previously really sweet and gentle and very beautiful child was hitting and punching and biting,” McGowan said, adding that the behavior came “out of nowhere.”

McGowan had unwittingly joined a select group of parents whose children struggle with a rare condition that the medical establishment in most states, including Oregon, has not wanted to recognize.

Their plight, affecting thousands of families, shows how insurers, the medical establishment and state bureaucrats can struggle to respond to the changing state of medical research, even as evidence keeps building.

McGowan and her fellow parents hope that, in Oregon, that may be starting to change.

“These are kids who are really suffering. And their parents are suffering along with them,” McGowan said. “When these insurance companies deny care, they are denying these families.”

In the 1980s, researchers with the federal National Institute of Mental Health noticed a pattern of children exhibiting obsessive-compulsive behavior or sensory problems soon after undergoing a common physical malady — strep throat.

By the 1990s, the condition had a name: PANDAS, an acronym for  pediatric autoimmune neuropsychiatric disorders associated with streptococcal infections.

In Oregon, an estimated 4,000 children have either that condition or its close cousin, which can be caused by non-strep infections. That’s called pediatric acute-onset neuropsychiatric syndrome, or PANS.

Despite their decades-old history, PANDAS and PANS have long faced skepticism or, at least, bewilderment among primary care providers.

The medical challenges are just part of the problem. The other, parents say, is a health care system that is often reluctant to cover treatment for children with the conditions. Denials of treatment are routine, with commercial insurers and the Oregon Health Plan often calling treatment  “experimental.”

Those fighting for the treatment point to positive results in children whose families can afford it. If antibiotics or steroids don’t address the symptoms, a more expensive treatment called intravenous immunoglobulin therapy is often prescribed. The blood product contains antibodies to fight infections, and is infused over two days of therapy.

The nature of PANDAS and PANS means that symptoms can fade away and then flare up. In McGowan’s case, a prescription of steroids initially helped.

But after two years of her daughter being on and off steroids, they are trying to get the more expensive blood-based therapy.

“She was… left with rage as being the dominant thing that we saw on a daily basis,” McGowan said. “It was like a switch had been flipped.”

Dr. Dana Hargunani, chief medical officer of the Oregon Health Authority, said PANDA/PANS is currently a gray area when it comes to Oregon Health Plan coverage, creating a situation that is difficult for children and families.  While it’s possible for families to seek coverage on a case-by-case basis, “there’s not adequate evidence or even clarity about the exact diagnosis,” she added.

“There’s still an emerging body of evidence to help us understand how to effectively support these kids, while families and these children are really impacted,” Hargunani said. “So it’s navigating in that really challenging environment and recognizing the impact it’s having as we’re trying to work through the research and the challenges that come with that.”

But this lack of clarity is no comfort to parents who are desperate for help.

“I would say most of these families, including my own — they talk about losing their kids overnight,” said Sarah Lemley, executive director and co-founder of Northwest PANDAS/PANS Network, an advocacy group that helps parents file appeals and seek coverage. “Literally, it’s like someone comes and robbed your kid out of your bed and you have this replacement of a psychiatric child who’s in such distress, you don’t recognize them anymore.”

Christina Cronin-Vejar and Ivan Vejar of Salem are among those parents.

They first realized something was wrong when their daughter was 6 years old and in kindergarten. Within a two-month period, she had strep throat, influenza, and hand, foot and mouth disease.

“She stopped eating. She couldn’t go to school,” Christina Cronin-Vejar recalled. “You’re sitting there going: How can this child suddenly have a psychological break overnight?”

The Vejars have tried other treatments without success. Coverage is a problem. One specialist, for example, doesn’t accept patients on the Oregon Health Plan, they said. So they are trying to obtain a pre-authorization for an out-of-network provider, so their daughter can be evaluated for advanced treatment. The parents say it’s a long shot, but worth the effort.

“We’re doing all of this in hopes that we can squeak in,” Ivan Vejar said.

Despite surfacing for researchers in the 1980s, and being formally characterized in 1994, early studies were unable to show a biomarker of the infection-caused conditions — meaning there was no antibody, inflammatory marker or lesion that could be detected through head imaging.

That meant no test could provide a definitive diagnosis.

“Because of this, the disease has remained controversial, and it has been challenging to identify and study this population of children,” wrote

Some called it a “hypothesis,” rather than a condition. How it arose remained a matter of debate.

But some researchers pressed on.

In 2017, the consortium published consensus guidelines for the medical community. Those addressed treatments such as steroids,

intravenous immunoglobulin, antibiotics and other medications. The guidelines were endorsed by the National Institutes of Health, the nation’s government-sanctioned medical research authority.

The guidelines call the intravenous treatment “preferred” for practitioners in the consortium, and cited one 2015 study that found it was highly effective in addressing symptoms.

But it’s expensive if a family lacks coverage.

McCornack  says it’s an impossible cost for many families.

“It’s not fair that because I have the means, my child is well, and because other people don’t, they’re suffering,” McCornack said.

By 2019, the same year her daughter was treated, three states had mandated insurance coverage for PANDAS: Delaware, Illinois and New Hampshire.

And in Oregon, parents thought they could be next.

A Ceremony Without Impact

May 2, 2019, was a proud moment for parents advocating for their children to get treatment for PANDAS/PANS. Parents and children gathered around the desk of Oregon Gov. Kate Brown as she signed a ceremonial proclamation approved by the Legislature that designated Oct. 9 as an annual PANDAS/PANS awareness day.

The proclamation stated it is “imperative, a matter of public health, that more be done … at the local, state and national levels.”

But the proclamation didn’t translate into tangible results.

“Everyone signed on that unanimously in the House and Senate,” said Lemley. But when it came to actually providing care for children, she said, the message was: “We can’t get behind that.”

A nurse practitioner, Rep. Rachel Prusak, D-Tualatin/West Linn, told The Lund Report that in her view, if a provider orders the treatment for the child, it should be covered. She said Oregon could help parents around the country.

“I’m hopeful that Oregon can be the next state that helps treat these kids, which will then add to some of the data that maybe other (states) need,” Prusak said.

She was a chief sponsor of legislation in 2019 that would have gone further than a proclamation. House Bill 2511 would have required health plans to cover treatment.

It didn’t pass, but parents shared their stories in a hearing.

Prusak then sponsored a similar bill, H.B. 2390, in the 2021 session. The House Health Care Committee, which she chairs, heard from experts.

“Despite the abundance of compelling basic science evidence, including both human and animal models, uninformed physicians and insurers are still turning away patients with treatable PANS/PANDAS,” testified

Dr. Jennifer Frankovich, director of Stanford Children’s Immune Behavioral Health Clinic, and Dr. Margo Thienemann, both of Stanford University School of Medicine.. “It is our opinion that the diagnosis and treatment of PANS/PANDAS is no longer ‘controversial’ and now it is just a matter of refining the treatment and finding optimal regimens for the different subsets of PANS diseases.”

A PacificSource lobbyist, however, urged lawmakers to wait for the state’s Health Evidence Review Commission to develop coverage guidance instead of passing its bill. The insurer’s letter to lawmakers argued the commission had just started a process of forming guidelines and said the bill was “racing ahead of the medical evidence.”

Prusak wasn’t able to get the votes to advance that bill out of the legislative committee.

Other states, meanwhile, were joining the three who’d passed similar laws, bringing the number to eight in all.

Oregon’s evidence review commission is taking up the questions of what to do with PANDAS and PANS. The state entity is tasked with weighing science to determine what’s covered in the Oregon Health Plan, which insures about 1.4 million low-income Oregonians, including 300,000 children.

The commission has been considering changes that could remove barriers to treatment for families experiencing the infection-caused condition.

An initial draft of plans for coverage drew criticism from families. It called for other courses of treatment before the most costly intravenous treatment could start, and also required the signature of two specialists for that to happen. Given the difficulty of finding specialists, that was too difficult, opponents said.

Last Thursday, the commission’s Evidence-based Guidelines Subcommittee met with assistance from three state-designated experts and voted to modify the recommendation. It recommended a draft plan for coverage for families on the Oregon Health Plan that would require parents to consult with only one specialist to get the more costly treatment.

The full Health Evidence Review Commission will review the recommendation in May.

A vote by the commission would take effect in January 2023.

While its decision would not mandate commercial insurers follow suit, it would increase the pressure on them to do so.

Meanwhile, parents will continue to advocate with the Legislature, plead with state officials and call insurers seeking solutions.

“I’m all, like, matter of fact,” McGowan said. “But to see your child in the distress that we’ve seen her in – you can't convey that – what it’s like. And it is heartbreaking.”

Apr 14 2022
News source:
The Lund Report
Keywords:
PANDAS, PANS, intravenous immunoglobulin therapy
×
This article is for premium subscribers. If you are one, please sign in below.
You can see two more premium stories for free. To subscribe, click here. We depend on premium subscriptions to survive, and they are tax deductible.
Sign InGo Premium Not now