Moderate Democratic Rep. Kurt Schrader tells The Lund Report that the Senate may take a bipartisan approach to fixing the shortcomings with the Affordable Care Act and could ignore Walden’s draconian bill, which the Congressional Budget Office earlier estimated would kick 24 million Americans off their health insurance.
By:
Chris Gray 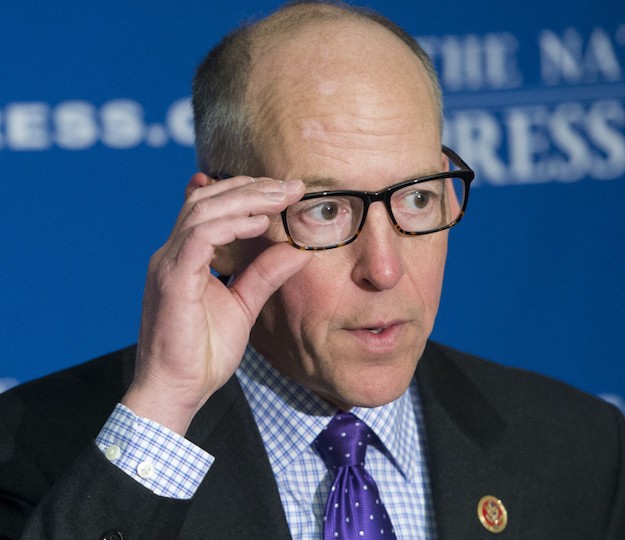 Oregon Republican Rep. Greg Walden joined with House Speaker Paul Ryan, R-Wis., on Thursday to lead the U.S. House of Representatives to pass a new version of Trumpcare -- the Obamcare repeal which would end health coverage for 24 million Americans, decimate the Medicaid system and drastically increase health insurance premiums for older Americans and the working poor.

The clone of Trumpcare is even more draconian than the bill that failed in March, with the newer version modified to appease the far-right Freedom Caucus. It allows states to strip coverage for essential health benefits such as pregnancy care, mental health coverage and addictions, and gives states the ability to allow insurers to charge higher premiums for people in poor health or deny them coverage completely.

Walden, who has been called the architect of the American Health Care Act, has designed a system that would devastate his Eastern Oregon district, leading to the potential closure of rural hospitals, the loss of health coverage for nearly 100,000 of his constituents and the loss of thousands of healthcare-related jobs, according to estimates based off a Congressional Budget Office report from March.

Ryan rushed the revised American Health Care Act through without a new score. The CBO is expected to release a new report next week showing even worse numbers.

The bill now goes to the Senate, where to pass it will need either 60 votes, including Democrats -- or key parts will need to be struck  to comply with a rigid budget reconciliation process that allows legislation with only 51 votes.

In his remarks to MSNBC’s Joe Scarborough, Walden appeared to rely on the liberal Democrats who control Oregon’s state government to protect the state’s residents with pre-existing conditions from losing coverage.

"Oregon would have to get a waiver," said Walden. "I guarantee you my state would make sure that that waiver would take care of people like that.”

Residents in Texas, Mississippi and Alabama would not likely be so fortunate. Republicans in those states and several others have already turned down hundreds of billions of dollars in federal Medicaid money rather than provide healthcare for their poorest residents, many of them black or Latino.

Oregon has gone the high-risk pool route before, when it had no other option, via the Oregon Medical Insurance Pool. OMIP was a godsend to some people, but it had very high premiums that many people could not afford, leaving thousands of people in the state with pre-existing conditions uninsured.

Walden said Maine had a better route -- an “invisible high-risk pool” that does not segregate people from the regular market and seemed to act more like a reinsurance program, subsidizing health insurers who have more expensive clients.

U.S. Rep. Kurt Schrader, D-Canby, told The Lund Report after the 217-213 House vote that a reinsurance plan is what Congress needs to pass to stabilize the market -- not a massive, hyperpartisan bill that threatens the entire healthcare system.

He blamed the Republicans for sabotaging the Affordable Care Act and eliminating options such as Oregon’s Health CO-OP by reneging on appropriations for risk-corridor payments and reinsurance stabilizers in the first place.

Before Republican voters made their preference for Donald J. Trump clear, the failed presidential candidate, Sen. Marco Rubio of Florida, bragged about cutting off risk corridor funding for the CO-OP and other insurers, such as Moda Health, which then needed to partner with Oregon Health & Science University to remain solvent because it got clobbered insuring a large number of people who had been denied health insurance before Obamacare.

Schrader said $8 billion in high-risk funding would be a pittance to cover the healthcare for everyone who loses insurance because of a pre-existing condition -- and it would essentially reward states for doing the wrong thing; Oregon would be unlikely to see any of those dollars. Walden told MSNBC that the money is in addition to $100 billion previously placed in the bill to help states stabilize the health insurance market.

But the $100 billion was meant to brace the state individual health insurance market after it’s rocked by the legislation’s repeal of the individual health insurance mandate and the switch from income-based subsidies to age-based subsidies -- which would cause many older and working-class people to leave the market even as younger and wealthier consumers see lower premiums.

Schrader said a budget agreement that Congress recently struck left out an appropriation for cost-sharing reductions -- which people between 138 percent and 250 percent of the poverty line get to help offset high copayments and deductibles.

While the Department of Health & Human Services under Trump has continued to make these payments for consumers, the lingering uncertainty about this appropriation could lead to unnecessarily high individual health insurance premium hikes when rates are released later this month.

AHCA Hurts Eastern Oregon the Most

Even if Oregon is unlikely to go along with a waiver gutting the ACA’s essential health benefits, the bill would nevertheless harm Walden’s constituents and could prompt the closure of one or more rural hospitals in his district. Small, rural hospitals have been rescued by increased Medicaid spending since the passage of the Affordable Care Act.

Walden’s rural, largely working-class district had the biggest expansion of Medicaid in the state, with about 89,000 low-income adults newly covered by the Oregon Health Plan. His district was second in the number of constituents who bought plans on the exchange, 32,000, second only to Rep. Earl Blumenauer’s Portland district.

Most of these people would lose their health insurance under the Republican health bill, because it ends the 90 percent federal match rate for the ACA expansion in 2020. People who maintained coverage could keep it but most poor people lapse in coverage or churn in and out of the system.

And once they are removed from Medicaid’s rolls, they could no longer bring in that high federal match rate. If Oregon wished to cover them, the federal share would revert to a more traditional Medicaid matching rate of about 65 percent. The state, which is currently tackling a $900 million deficit to maintain coverage at current rates, would almost certainly be unable to afford insuring these adults if the state’s share increased from 10 to 35 percent.

A Qunnipiac Poll taken in March showed only 17 percent of Americans approved of the American Health Care Act. Walden’s bill is so toxic even Republicans in his district have denounced it:

“Oregon's experience with the ACA is mixed. Cover Oregon was an undisputed fiasco and insurance premiums are rising for too many Oregonians. At the same time, Medicaid expansion is now is providing roughly 400,000 Oregonians with health security for the first time,” said state Rep. Knute Buehler, R-Bend.

“As approved by the House, the American Health Care Act remains a bad plan for Oregon because it would eliminate the Medicaid safety net for tens of thousands, blow a bigger hole in our state budget and strip away coverage for essential opioid addiction treatment. I urge the Senate and the President to step back from the partisan politics and develop patient-centered, bipartisan health care reforms that can stand the test time.”

Prior to the implementation of the Affordable Care Act, Oregon’s rural hospitals lost an average of $1.1 million a year, and had an average of $5.1 million in uncompensated care, according to the state report. But by 2015, these hospitals had a median operating margin of $900,000 and uncompensated care had been cut in half to $2.5 million. Walden has eighteen of these tottering front-line rural hospitals in his district.

“I think you’ll see some of them close. The CCOs will not be able to do as much,” Schrader said. “The hospitals will have to scale back some of their social interventions.”

“Oregon hospitals believe that the AHCA will cause serious damage to the progress our state has made on coverage, transformation and cost-savings. More importantly, we believe it will have deep and lasting negative impacts on the health of Oregonians. We cannot support this bill and urge the Senate to reject it,” said Andy Davidson, the president of the hospital association.

Rural hospitals and providers that survive would likely make considerable layoffs; the state of Oregon has estimated that 23,000 people would be put out of work by the Republican health bill, as coordinated care organizations retreat from covering poor adults to their initial mission of providing health coverage just for children and disabled people.

Walden has been safely cocooned politically in his Eastern Oregon district, as Democrats have not waged a serious campaign against him since he took office in 1999 and the district leans strongly Republican.

However, the backlash against the Trump presidency and the Republican Congress has been so great that last month a novice Democrat in Kansas, James Thompson, gained 20 percentage points on Hillary Clinton from last election’s results, losing by just seven points in a district that Trump won by 27 points -- and that was in a district that leans far more Republican than the Eastern Oregon district.

Walden’s district, which includes Ashland, Bend and Hood River, as well as staunchly Republican towns like Klamath Falls and Ontario, has almost the identical partisan makeup as the state of Montana, where Democrat Rob Quist has a fighting chance of winning an open seat on May 25. Trump won both districts by 20 points after narrower Republican victories against President Obama.

Last month, the Oregon Republican was loudly harangued by his constituents in The Dalles and Hood River as he attempted to sell the American Health Care Act.

Schrader predicted that, even if Walden hangs onto his seat, many other Republicans in more vulnerable districts across the Northeast, the Rust Belt, Florida and California will not.

“It puts a lot of their members at risk for a vote that doesn’t go very far in the Senate,” said Schrader.

He expects the Senate to take a more bipartisan approach toward fixing the problems with the Affordable Care Act. While many House Republicans represent gerrymandered districts, Senate Republicans must represent whole states, including 21 senators in states that have expanded Medicaid.

There are also 10 Democrats up for re-election next year in states Trump won last year, though Schrader conceded that some members of his party would refuse to accommodate any compromise with Trump and the Republicans. “I think you could get Democratic votes to fix the Affordable Care Act. Come on, Mr. President, I’m waiting.”

Washington’s two moderate Republicans, Rep. Jaime Herrera Beutler of Vancouver and Rep. Dave Reichert of the Seattle suburbs, both voted against the American Health Care Act. It’s unclear whether voters will acknowledge their opposition to the bill or punish these representatives’ support for Ryan, who could not have passed the bill without them in his caucus.