Republican Health Bill Could Cause 23,000 to Lose Healthcare Jobs

The American Healthcare Act, also known as Trumpcare or Ryancare, could leave rural hospitals in the lurch, causing them to hemorrhage money, as they did before the Affordable Care Act was enacted. Eighteen of these hospitals are in the district of Rep. Greg Walden, a chief supporter of the Obamacare replacement.
By:
Chris Gray 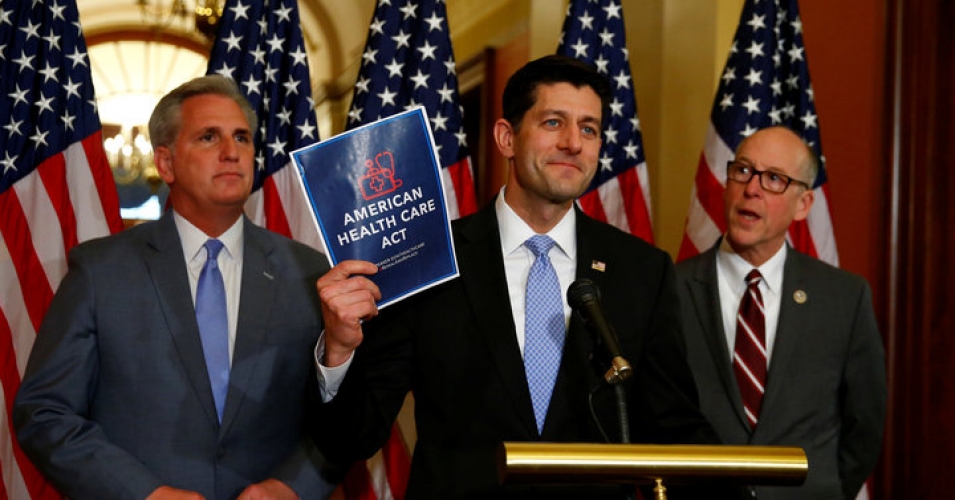 The state of Oregon projects that about 23,000 Oregonians in the healthcare industry could lose their jobs as result of the Republican healthcare bill, filling a critical hole in the analysis released Monday by the Congressional Budget Office.

An analysis provided by the Oregon Health Authority and the Department of Consumer & Business Services predicts that these jobs would be lost after insurers and the state stop paying claims for 465,000 Oregonians, who would lose their health coverage as a result of the Obamacare replacement plan by 2026.

Oregon’s uninsured rate would triple from 5 percent to 15 percent by 2023 and continue to rise.

Most of the people losing healthcare coverage would be those enrolled in the Oregon Health Plan, with the state estimating 375,000 people would be dropped by 2026. Alternatively, the state estimates it would have to increase its spending by $2.6 billion over that time period to account for the drop in federal support.

The state would actually be able to receive the full match rate for Medicaid members who sign up by 2020 and complete their coverage renewals without lapsing in coverage. But based on current experience, the state expects most Oregon Health Plan members, many of whom are functionally illiterate or homeless, would not be able to navigate the bureaucratic renewal process seamlessly. Small lapses in coverage would prevent the state from getting the full match, and thus the state would be unable to afford to cover them.

“Very few people will be able to manage that continuous coverage,” said Leslie Clement, the director of policy and analytics at the Oregon Health Authority.

The Department of Consumer & Business Services predicted a more positive environment for the private insurance market, despite steep initial losses.

The individual mandate disappears next year and thousands of lower-income Oregonians and older residents would be unable to afford their health insurance premiums without income-based subsidies. Oregon insurance regulators expect these changes would cause 90,000 people to drop out of the individual insurance market in the next three years.

But in the 2020s, 70,000 new customers are projected to enter the market as employers drop coverage due to the removal of the employer mandate.

However, most employers offered health insurance to employees before they were mandated to offer the benefit, and it’s doubtful that they would slash employee benefits if there was not an affordable alternative.

The Republican tax credits are not indexed to inflation, so they will be worth less and less as premiums rise -- although for middle-class and upper-middle class consumers, the tax credit would be more valuable than current subsidies in today's dollars.

The numbers of people who retain coverage in the individual market may be overly optimistic, since they are rooted in the Congressional Budget Office’s prediction that a stabilization fund would prevent the individual insurance market from collapsing in a death spiral.

The stabilization fund would provide Oregon with $187 million to flexibly shore up the market and help make coverage more affordable. However, DCBS Director Pat Allen said that money would be spread out over 10 years.

Many outside observers believe removing the individual mandate and replacing it with a re-entry penalty would indeed cause a death spiral, since people who do not have coverage are punished for re-entering the insurance market, encouraging adverse selection.

“We’re concerned about the stability of the market,” Allen said, while declining to predict any such death spirals for individual health insurers.

The risk pool could easily get sicker each year as healthy people avoid the market, leading to higher prices and resultingly fewer customers and a sicker pool. It could then reach a point where all health insurers leave the market, which is exactly what happened when similar policy changes were made to an Obamacare precursor in Washington state in the 1990s.

Clement said she expected the balance sheets for rural hospitals to revert to their old positions. “It’s logical to assume that some of that experience will return,” she said.

Walden, as the chairman of the House Energy & Commerce Committee, is a lead author of the American Health Care Act, and has stood with House Speaker Paul Ryan, R-Wis., to promote the plan.

In Washington on Thursday, three Republican congressmen joined all 14 Democrats on the House Budget Committee to vote against the healthcare bill, signalling there may be as many as three dozen Republicans opposing it in the full House, which would be enough to defeat it.

However, these three members, all Southerners, are affiliated with the far-right Freedom Caucus -- and they oppose the Walden-Ryan bill because it doesn’t go far enough to end Obamacare. One proposal to satisfy these Republicans would push the end of the Medicaid expansion up to 2018, expediting the purge of poor people from the Medicaid program.

Walden’s district saw more people -- 89,000 -- get Medicaid coverage than any other district in Oregon as a result of Obamacare. His district also reported 32,000 people buying health plans on the insurance state marketplace, second only to the generally wealthier Portland district served by Rep. Earl Blumenauer, where 50,000 plans were sold.

Dan Grigg, the administrator of the Harney District Hospital in remote Burns, in the southeast corner of Oregon, spoke out against Walden’s bill at an earlier press conference with Democratic Gov. Kate Brown.

Grigg said he doesn’t agree with all aspects of Obamacare, but it allowed 800 of Harney County’s 7500 people to get Medicaid coverage, and he praised the work of the Eastern Oregon coordinated care organization to increase access to primary care. His hospital has added primary care practitioners, psychiatric services and community health workers.

“We can’t lose some of the things we got from the ACA,” Grigg pleaded. “We will once again have family and neighbors and friends no longer able to access care.”

Here are questions that should be considered as proposed healthcare legislation is formulated.   Review more at:  https://www.healthcaretownhall.com/?p=8394#sthash.uUSHV0kP.dpbs