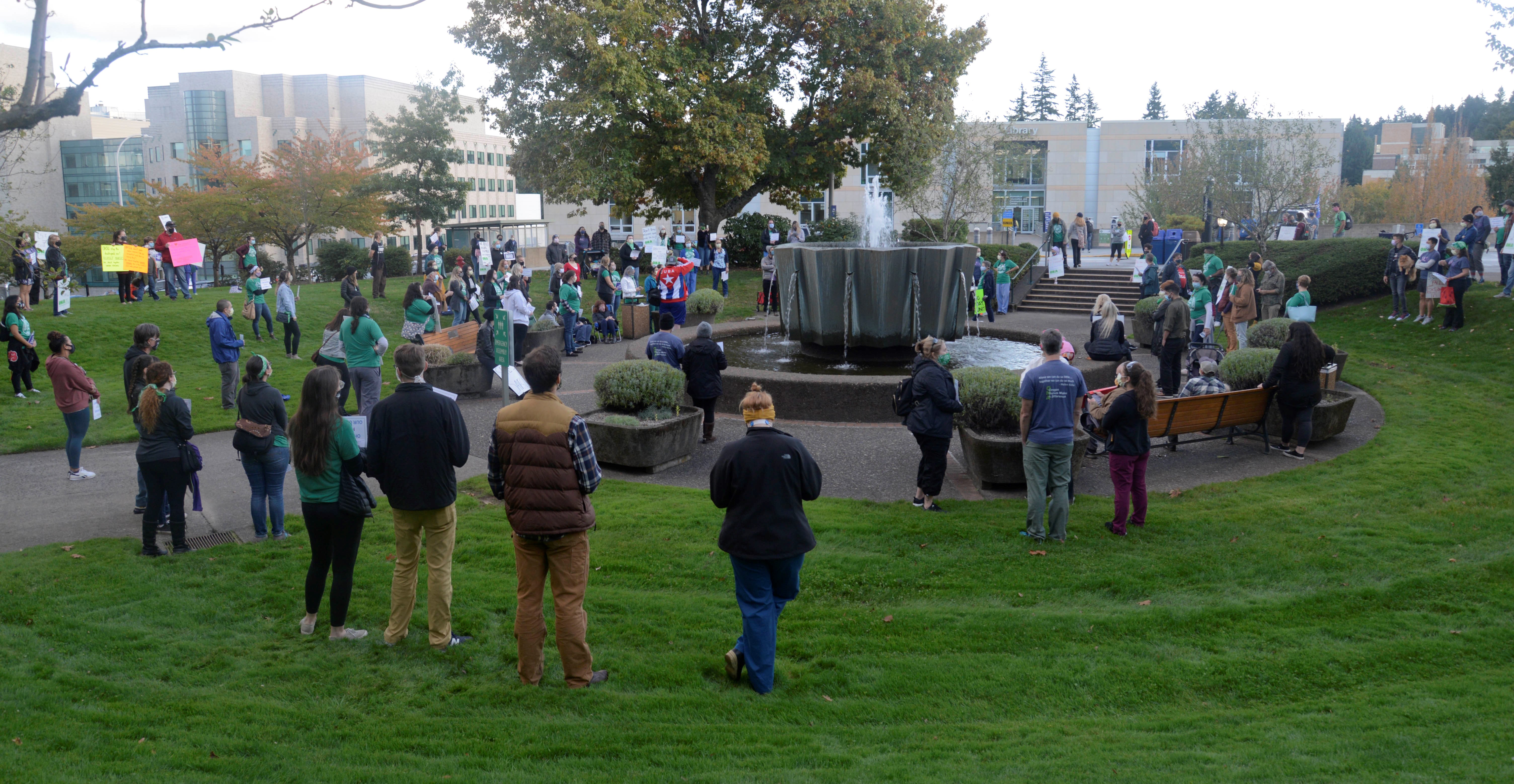 Nurses rally at Oregon Health & Science University./Oregon Nurses Association
The Nurse Licensure Compact, or NLC, was developed by the National Council of State Boards of Nursing to allow nurses to practice in their home state and in other states that have recognized the compact without being licensed in those other states. Oregon is not a member of the NLC, and the Oregon Nurses Association strongly opposes Oregon joining.

At first glance, it might seem like a good idea for Oregon to join the NLC given the ongoing nurse staffing crisis our state is facing. Further analysis, however, makes it clear that Oregon should remain outside of the compact and seek different, more effective ways of responding to the crisis facing hospital systems in Oregon.

ONA is deeply committed to supporting nurses, and to reducing barriers to licensure. However, belonging to the compact dramatically infringes on the state of Oregon’s authority to enact and enforce standards that are essential for nurses to practice in our state.

Imagine a scenario where a nurse practicing in Oregon through the NLC had inflicted serious harm on a colleague or a patient in another state. In such a circumstance, if the nurse did not hold an Oregon license, the Oregon State Board of Nursing would have had no prior knowledge of the nurse’s employment history and, if the nurse inflicted harm here in Oregon, no direct way to handle a violation of our state laws and regulations because that nurse is licensed in another state. The National Council of State Boards of Nursing is a private organization that makes decisions about how states participate in the NLC. This would weaken the authority of the State of Oregon and our regulatory boards to enact standards that Oregon policymakers know to be essential for nurse practice here.

Further, joining the NLC would reduce state revenue gained by issuing Oregon’s current single state license. For this reason, NCSBN offers a financial program whereby they will initially assist states in replacing some of that lost revenue. However, there is no guarantee regarding how much will be lost, how much will be replaced, or how long the financial incentive from NCSBN will be provided. According to a recent Oregon Legislative report on HB4003, OSBN could lose up to $700,000 a year, seriously impacting the agency’s ability to do its important work.

That same report did not show any evidence that states who joined to the NLC had better staffing. In fact, the HB 4003 report on Oregon's nursing workforce found that Oregon has some of the best nurse staffing in the nation and that the NLC has not resulted in a more robust workforce in states who have joined.

Without issuing its own licenses for nurses practicing in Oregon, the State of Oregon would also be less able to connect with and understand our own workforce. For example, we would not know how many nurses are practicing in our state, the languages spoken, the race, ethnicity, or gender identity of our nursing workforce, or to know whether we have a nursing workforce that is able to serve our diverse communities. Currently, the Oregon State Board of Nursing collects this demographic information to ensure our nursing workforce can represent Oregon’s diverse populations.

Other states also have widely varied education and continuing education requirements for nurse licensure. Oregon must ensure that nurses practicing here uphold our state’s high standards of nursing. The interstate compact can be compared to a driver’s license; a nurse who holds a license in a compact state may practice in any other compact state without receiving (and paying for) a license in that state, or meeting the standards embedded in each state license.

Finally, the recent Supreme Court decision overturning Roe v Wade is also of concern.  A recent article in the National Law Review points to the potential impact of the Dobbs decision on providers who are licensed in multiple states, including nurses. The National Law Review takes the state of Texas as their primary example because Texas allows their state licensing agency to revoke the license of a caregiver who performs or assists in the performance of abortion services. The National Law Review says, “These types of state laws could criminalize licensees or other individuals who assist a patient in obtaining an abortion in a state where abortion is legal.  It is possible that state licensing agencies where abortion is illegal could pursue disciplinary action against a provider who is licensed in multiple states, if that provider performs a legal abortion in another state.” Oregon has ironclad guarantees to access to reproductive health services; it is possible that nurses licensed in other states who came to Oregon would choose to limit their practice to avoid disciplinary action from their home state.

Rather than accept the lower standards that come along with participation in the NLC, Oregon should turn its attention to other, more effective mechanisms of addressing our staffing crisis. For ONA, those mechanisms are reflected in our proposed 2023 legislation that would not only strengthen our existing nurse staffing law but add in new elements like minimum numerical staffing standards for acute care settings. This proposed legislation is designed to specifically address the root causes of Oregon’s staffing crisis: the failure of hospitals to follow our existing law, the failure of state agencies to enforce that law, and the horrific working conditions that are forcing nurses to leave the bedside in record numbers while also preventing nurses from returning to work out of fear of burnout and stress.

From our perspective, if it looks too good to be true, it likely is, and the NLC promises a solution to an ongoing crisis that it simply cannot provide. Oregon would be wise to avoid the quick fix and look for meaningful, long-term change.

Tamarah “Tamie” Cline has been an ONA member since 2001 and has served as a bargaining unit leader at Good Shepherd Medical Center (GSMC) in Hermiston since 2009. Cline currently serves as the ONA President,  the Chair of the ONA/GSMC bargaining team, and works in the treatment center in IV therapy and wound care at Good Shepherd Medical Center in Hermiston.

Nov 3 2022
News source:
The Lund Report
Keywords:
hospitals, nursing, oregon nurses association, access & quality, caregivers, nurse licensure compact
×
This article is for premium subscribers. If you are one, please sign in below.
You can see two more premium stories for free. To subscribe, click here. We depend on premium subscriptions to survive, and they are tax deductible.
Sign InGo Premium Not now