OHSU Plans to Create First Children's Hospital in One Location

Right now Legacy Emanuel offers similar services on its campus and has for many years.
By:
Diane Lund-Muzikant 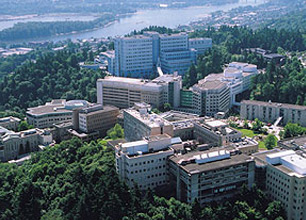 OHSU has announced its expansion of Doernbecher Children’s Hospital, making it the  “the first children’s hospital in the Pacific Northwest … . to offer comprehensive obstetric, neonatal and developmental medicine services in one location,”

But Legacy Emanuel offers the same exact services and has been doing so for many years. Competition between the two hospitals is nothing new – years ago a debate ensued over whether Portland actually needed two distinct children’s hospitals, but the state had no leverage to stop the expansion plans.

There's one distinction between what OHSU is envisioning and what's already happening at Legacy, according to Tamara Hargens-Bradley, OHSU spokesperson.

OHSU intends to offer all services for mothers and their babies in one building.  Currently those services are spread across its campus. "There's a huge difference between a campus and a building. Moms won't have to move across the street to another facility," she told The Lund Report.

At one time, OHSU ran the only children’s hospital. Today, Randall Children’s Hospital on Legacy’s campus touts itself as offering the most modern approach to children’s healthcare.

On another front, OHSU decided to become a Level I Trauma Center after Legacy Emanuel had that designation. Now both facilities are able to provide total care for every aspect of injury from – from prevention through rehabilitation.

In making the announcement about OHSU’s expansion, its president, Dr. Joe Robertson, told the media, “This expansion would bring together a constellation of faculty and staff not available anywhere else in the state. This is yet another example of OHSU embracing big health challenges, ideas and opportunities to improve the health and well-being of all Oregonians.”

The potential expansion could add up to 22 additional beds for Women’s and Children’s Services and make available approximately 68 beds across OHSU Hospital through new construction or repurposed space.

Robertson also touted the latest collaboration by OHSU Partners, announcing a partnership with GE Healthcare at yesterday’s board meeting. Their first project will investigate the use of ultrasound in rural and underserved communities.

Earlier, they both signed a memorandum of understanding to develop collaborative research programs in cardiovascular medicine, imaging and big data research. The research programs are aimed at bringing together OHSU’s clinical expertise with GE Healthcare’s technology prowess to answer fundamental questions in biology and medicine.

“Through this collaboration, OHSU and GE Healthcare will apply leading-edge medical technology to a number of clinical challenges for which there is an unmet need,” said

Daniel Dorsa, Ph.D., senior vice president for research at OHSU. “We are excited about the possibilities.”

And, Robertson pointed out that President Obama, in his State of the Union message, mentioned four diseases – cancer, malaria, tuberculosis and HIV/Aids. “On each of those we are truly among the elite of the elite in the nation and the world,” said Robertson. “What he was talking about is going on right here at OHSU, and the nation priorities are aligned with our strengths.”

"Right now Legacy Emanuel offers similar services on its campus and has for many years."

Legacy and OHSU have offered similar services on their campuses for many years. The distinction is this: OHSU's proposed new facility would create the first children’s hospital in the Pacific Northwest — and one of the few in the country — to offer comprehensive and aligned obstetric, neonatal, pediatric surgery and developmental medicine services under one roof, in Doernbecher Children's Hospital. Today, OHSU's Labor and Delivery, Mother-Baby, Neonatal, Antepartum services are housed in OHSU Hospital.