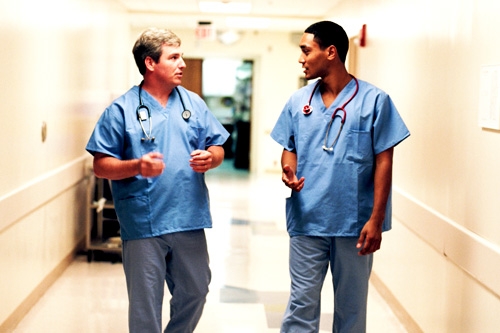 Four hospital systems in the Portland area have employees infected with COVID-19, including Oregon Health & Science University, where the number remains small but is edging up as more test results come in.

On Friday, The Lund Report revealed that five health care workers at OHSU had contracted the highly contagious virus. On Monday, Dr. Danny Jacobs, OHSU president, said in a video news conference, that 12 were infected.

OHSU has tested at least 914 of its 22,000 employees. It is awaiting test results for 56 people. A total of 846 test results were negative. At least one person that The Lund Report has learned about has no direct patient contact, so that person may have been infected in the community.

OHSU is not the only Portland-area hospital with sick staff.

Foley declined to divulge the number infected. He said none had been in contact with a COVID-19 patient. At the end of February, staff at Kaiser Permanente's Westside Medical Center in Hillsboro checked in a patient who later turned out to have the disease. Kaiser asked staff who came into contact with the patient to self-isolate.

It's not clear how many staff members Kaiser Permanente has tested.

"Processing tests in our own lab has increased our ability to test employees with fast results," Foley said. "We are also taking additional steps to protect staff and patients. These include curbside pharmacy pickup and screening employees for symptoms before they enter our hospitals."

Kaiser Permanente has reported its positive cases to the Oregon Health Authority, which has not released them.

A spokesman at Legacy Health said eight staff members are infected. He said 31 people who suspected they’d been exposed were in self-quarantine.

Providence Health & Services told The Lund Report late Monday that at least 10 of its employees among 23,000 in Oregon, have COVID-19.

"Some employees may choose to receive care and testing directly from their provider and we wouldn’t have that information," said Gary Walker, lead spokesman for Providence Oregon. "It’s important to note that our caregivers may have been exposed to the virus outside of work, too, and that there is no way to directly connect contracting the virus to the work setting."

None of the hospital systems has revealed the job titles of those infected.

OHSU started testing employees about two weeks ago after the first patient in the hospital tested positive for COVID-19. OHSU has cared for 25 patients with COVID-19. Among those, 20 tested positive at OHSU and five were transferred from other facilities. A total of 16 have been hospitalized: Seven have been discharged, one person died and eight remain at OHSU.

By Tuesday morning, Oregon had 606 cases and 16 deaths. A total of 140 have been hospitalized; 132 remain hospitalized and 39 are on a ventilator.

The state appears to have enough personal protective equipment: 157,040 N95 respirators, 219,000 surgical masks, 22,408 gowns, 23,804 face shields and 103,906 gloves, according to a state tally on Monday.    But in a news conference called by unions on Monday, front-line staff said they lack protective gear. Alicia Holihan, an emergency department technician at PeaceHealth Sacred Heart Medical Center at RiverBend in Springfield, said staff have to reuse single use protective equipment. She even has a homemade mask. Irene Hunt, a home health care worker in Springfield, said she has nothing at all.

"Please provide home care workers with the basic safety equipment necessary to continue doing our jobs," Hunt pleaded during the news conference. "If our work is essential, our health and safety should be too.”

Even a well-funded hospital like OHSU, where managers say they have an "adequate" supply of  PPE, is running low on high-protection face shields with respirators -- powered air-purifying respirators.

“We are asking you to reuse PAPR face shields, when possible, until they break down,” a note said.

OHSU managers have asked staff to reuse at least some masks, by putting them in a paper bad after use. But that could change. "The rules change all the time," a source said, referring to PPE use.

Providers treating COVID-19 patients at OHSU are well-protected, sources told The Lund Report. But the problem is they don't know whether a patient has been infected until they're tested.

Staff say they're scared of getting sick. An OHSU respiratory therapist said during a news conference on Monday that at 35, he's considering for the first time in his life to write a will.

Reported infections among staff at other Portland area providers

I'm curious if other medical or mental health providers in the Portland area are reporting infections among their staff? Such as Multnomah County Health Department? or Outside In? or Central City Concern's Old Town clinic? Any infections among staff at Cascadia Mental Health or Cascadia's medical clinic? Please include what's happening with front line medical and mental health providers in the safety net clinics, as well as the mainstream large providers. Thank you!