New Labor Unit Forms At OHSU -- And This Time Without Contention 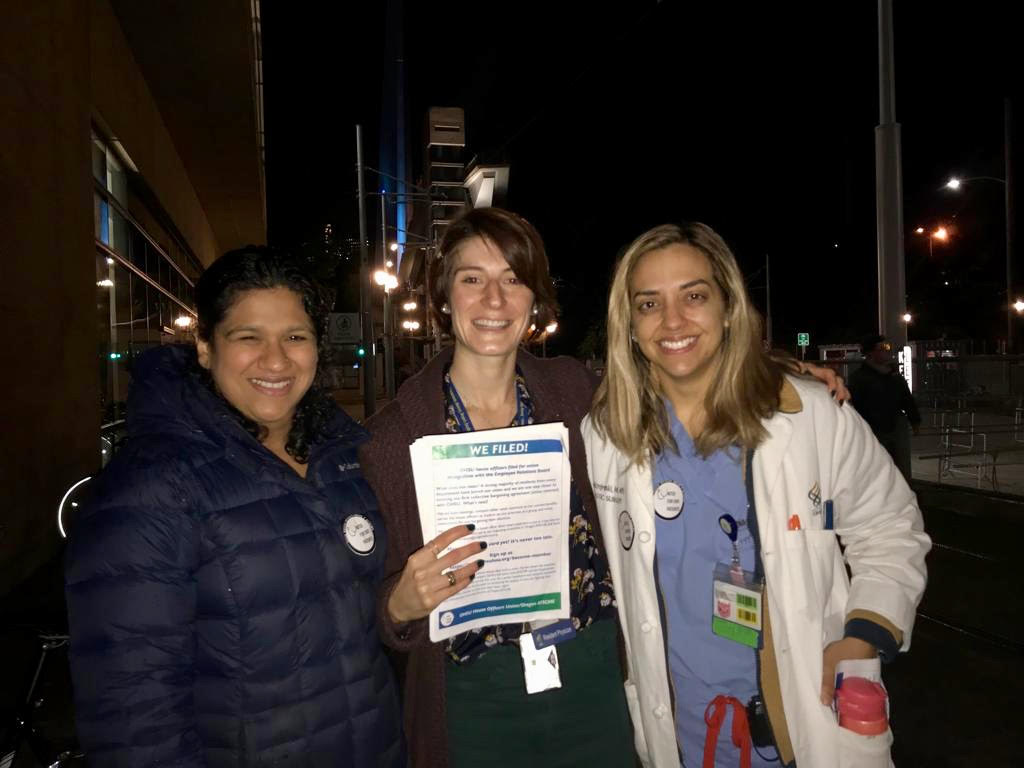 A labor movement that has swept through academic medical institutions across the country has finally arrived in Oregon.

Newly minted doctors who are going through on-the-job training at Oregon Health & Science University just received the green light from the state’s Employment Relations Board to form a bargaining unit, putting them on par with other academic medical systems in the West.

“We are the last major academic medical institution on the West Coast that hadn’t unionized,” said Dr. Breanna Jedrzejewski, a third-year surgery resident at OHSU. “This is the next wave in medicine in which residents are trying to have a voice so that they can advocate for themselves and their patients.”

The push for the new bargaining unit, under the American Federation of State, County and Municipal Employees, comes amid an epidemic of physician burnout. Many younger physicians, who often work around the clock, want more free time and more money and they’re likely to push for both.

Nevertheless, the formation of their bargaining unit went without a hitch -- standing in stark contrast to recent contention between OHSU administrators and two other bargaining units. AFSCME has filed complaints on behalf of bargaining units representing about 300 OHSU graduate students and about 7,000 employees who work as medical technicians, drivers, food service staff and other positions.

But the organization of this latest bargaining unit, which includes about 850 physician residents, fellows and interns at OHSU, has been seamless.

“We’re thrilled with the level of cooperation that we’ve seen from OHSU,” said David Kreisman, spokesman for Oregon AFSCME.

The bargaining unit has been a long time coming. Interns, residents and fellows at OHSU have been talking for decades about forming a union, Jedrzejewski said. They had trouble mobilizing because many were worried they’d appear unhappy or as if they were trying to rock the boat.

Their desire to unionize is a sign of a time when many younger people want more out of life than a career, said Sarah Thompson, an AFSCME organizer.

“The working conditions for that group of people is prohibitive for certain people to become doctors,” Thompson said. “These are their child-bearing years, yet they’re expected to work 80 to 95 hours a week. There’s no work-life balance.”

Overworked physicians have a high rate of burnout.

Residents, interns and fellows, known collectively as house officers, also have little say in their work life, starting with what hospital or other facility they train at. They don’t get to pick where they will train. Rather, they’re assigned to a medical institution by a national program. The graduates discover where they’ll go by opening an envelope on “Match Day.”

“It’s a bit like an arranged marriage,” Thompson said.

House officers can’t negotiate the terms of their contracts, and salaries are set. At OHSU, interns or first-year physicians-in-training earn $58,400 a year. That’s bumped up to $61,000 the second year and $63,600 the year after that.

That might seem like a good wage in the Portland area. But residents, interns and fellows are typically strapped with a mountain of debt.

Jedrzejewski, who has a bachelor’s degree, a master’s degree in public health and an MD degree, owes $200,000 in student loans, and she’s not done with her training. She needs to complete a total of six years to become an attending surgeon.

She stressed that she loves working at OHSU.

“I really believe that OHSU is an incredible institution that strives to be an innovator in health and healing and a leader in that. But I think there are systemic issues within the medical system at large that work against physicians being able to care for patients to the best of our abilities.”

Jedrzejewski expects the new bargaining unit to push for better compensation and working conditions like those outlined in a Bill of Rights created by residents and fellows at Yale New Haven Hospital in Connecticut.

The 10 rights listed in the document include the right to a living wage, comprehensive health care and respect for diversity.

Next up for the new bargaining unit is the election of officers and contract negotiations.  In the meantime, AFSCME and OHSU are negotiating a contract for about 300 Ph.D. students who’ve formed a bargaining unit called Graduate Students United.

Those negotiations, which have gone on for months, have been difficult. In August, the union filed an unfair labor practice complaint against OHSU, accusing the university of discrimination in hiring, interfering with the right to unionize and failing to negotiate a contract in good faith.

That complaint is still pending along with another one that was also filed by the union on behalf of Local 328, which represents about 7,000 employees. That complaint accused OHSU staff, including the head of human resources, of creating fake Twitter accounts and using them to try to undermine the negotiating process. After AFSCME confronted OHSU, Dr. Danny Jacobs apologized and OHSU announced that Dan Forbes, the head of human resources, would resign.

OHSU agreed to a new contract for Local 328 that the union praised as “fair.”

On Nov. 1, Forbes stepped down. In the interim, he’s been replaced with Greg Moawad, a lawyer and business administrator who has been in charge of public safety at OHSU since 2011.

It’s not clear when the graduate students and OHSU will agree to a contract. The university’s proposal last month offered some concessions that the students had wanted -- such as increased stipends which are now capped at $32,000 a year for a student in the medical school -- and access to employee health care. But the students would still not get all the benefits that other employees have and the stipend increase would not apply to all graduate students, they said in a critique of the offer.

In the meantime, the union is awaiting a decision on its complaints. Adam Rhynard, chair of the Employment Relations Board, said it could be months before a decision is made. The union, calling OHSU’s action “egregious,” has asked the board to take several actions against the university, including fines.

OHSU declined to comment on the complaints while they’re being decided. It said in a statement that it “is committed to complying with all labor relations laws in Oregon.”

You can reach Lynne Terry at [email protected]

Nov 10 2019
News source:
The Lund Report
Keywords:
afscme, residents, fellows, interns, ohsu, bargaining unit
×
This article is for premium subscribers. If you are one, please sign in below.
You can see two more premium stories for free. To subscribe, click here. We depend on premium subscriptions to survive, and they are tax deductible.
Sign InGo Premium Not now