The partnership between OHSU and Salem Health is also taking shape with a new management company coming on board.
By:
Diane Lund-Muzikant 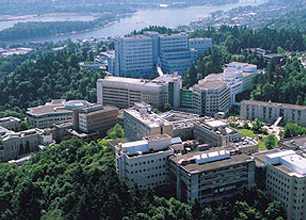 The joint venture between Moda Health and OHSU is picking up steam. Their collaborative approach, better known as Synergy, has garnered 5,300 primary care physicians and specialists in a shared risk model and covers 12,000 members – PEBB, OEBB, Precision Castparts, OHSU, Moda and others, according to a memo sent to physicians last Friday.

That memo, which was obtained by The Lund Report, outlines several goals during 2015:

Under that plan, Moda and OHSU appear eager to recruit more physicians and specialists and establish regional clinical advisory teams which will review claims data to reduce overall utilization by 3 percent. A statewide steering committee will focus on quality metrics, pharmacy opportunities and other issues.

“By early summer, we will reach out to those of you participating in the shared risk model to review the interim settlement reports,” according to the letter signed by Dr. William Johnson, senior vice president and president of Moda Health and Dr. Thomas Yackel, vice president and chief clinical integration officer of OHSU. “Our goal is to capitalize on efforts already made by aligning Synergy with the providers involved in these efforts, and to encourage clinical integration initiatives in all areas of the state.”

Moda is definitely in an expansion mode and recently announced plans to head into California, according to Jonathan Nicholas, vice president of marketing. With more than 400,000 medical members in Oregon, Moda has 13 companies under its umbrella and calls itself a “House of Brands” rather than a “Branded House,” he said.

“Our demonstrated successes to date in Oregon, in Washington and in Alaska have made clear that people like the way we are ‘making health simple.’ That’s why we made the decision this year to plant our flag in California. Any why California is going to be seeing a lot more of us in the years ahead,” Nicholas added. “As such, we are always looking for new opportunities, either by founding or acquiring companies, to continue our commitment to drive down the cost of healthcare by transforming the way it is both provided and paid for throughout the communities we serve.”

Earlier, OHSU loaned Moda Health $50 million to support its work in the public sector with OEBB and PEBB and build a future collaboration to improve the health of all Oregonians, Beth Heinrich, associate vice president of strategic communications at OHSU told The Lund Report.

At the same time, OHSU is also asking the Legislature for a $77.33 million appropriation over the next two years, which has nothing to do with the Moda affiliation, she said. “This appropriation funds support of our education and outreach missions. The vast majority of it covers about 28 percent of the costs to educate dentists, physicians and nurses at OHSU – and represents less than 2 percent of OHSU’s operating budget. There is also a small

portion that supports the Poison Control Center and The Child Development and Rehabilitation Center.”

It’s unknown whether OHSU’s budget request will face any opposition, but high-level officials have expressed concern, given its new relationship with Salem Health and Moda Health.

Under this new arrangement, Rapp anticipates that access to services in Salem will definitely expand. “Hopefully some of the patient traffic comes to Portland for care that’s not available in Salem, and we can keep care in Salem by working with the clinicians there. It means good things for the Salem community.”

During the due diligence process now underway, the boards of Salem Health and OHSU are expected to define their leadership roles, he said. “That process will dig a little deeper into understanding how each organization works and the final agreement will include that information to make sure it operates effectively. We’re getting to know each other at a more detailed level so everything is transparent to both partners.”

By this summer, the due diligence process should be completed and a management company formed, with new executive leadership chosen, Rapp said.

“I’m totally excited about what this can do for both communities and how OHSU can carry out its mission. We’ve been working together with Salem Health on the program level for a number of years and both organizations see an opportunity for a model like this to bring a much stronger and supportive way of care coordination and the Triple Aim objectives. It’s a natural extension of building our relationship over the next year.”

“Under this management company, we can provide strategic, operational and financial oversight in an integrated way and organize programs and services at both sites more directly,” he said. “We’re both trying to do a better job of pursuing population health goals and that requires a sophisticated information system, data analytics and an ability to bring evidence-based guidelines in a shared way for clinicians. For a group of health systems doing it independently, it’s very expensive and hard to do. That’s why our organizations came together to share our knowledge in a collaborative way.”

Apr 21 2015
News source:
The Lund Report
Keywords:
ohsu, Moda Health
×
This article is for premium subscribers. If you are one, please sign in below.
You can see two more premium stories for free. To subscribe, click here. We depend on premium subscriptions to survive, and they are tax deductible.
Sign InGo Premium Not now