Lack Of Affordable Housing Is Biggest Cause Of Homelessness, Expert Says 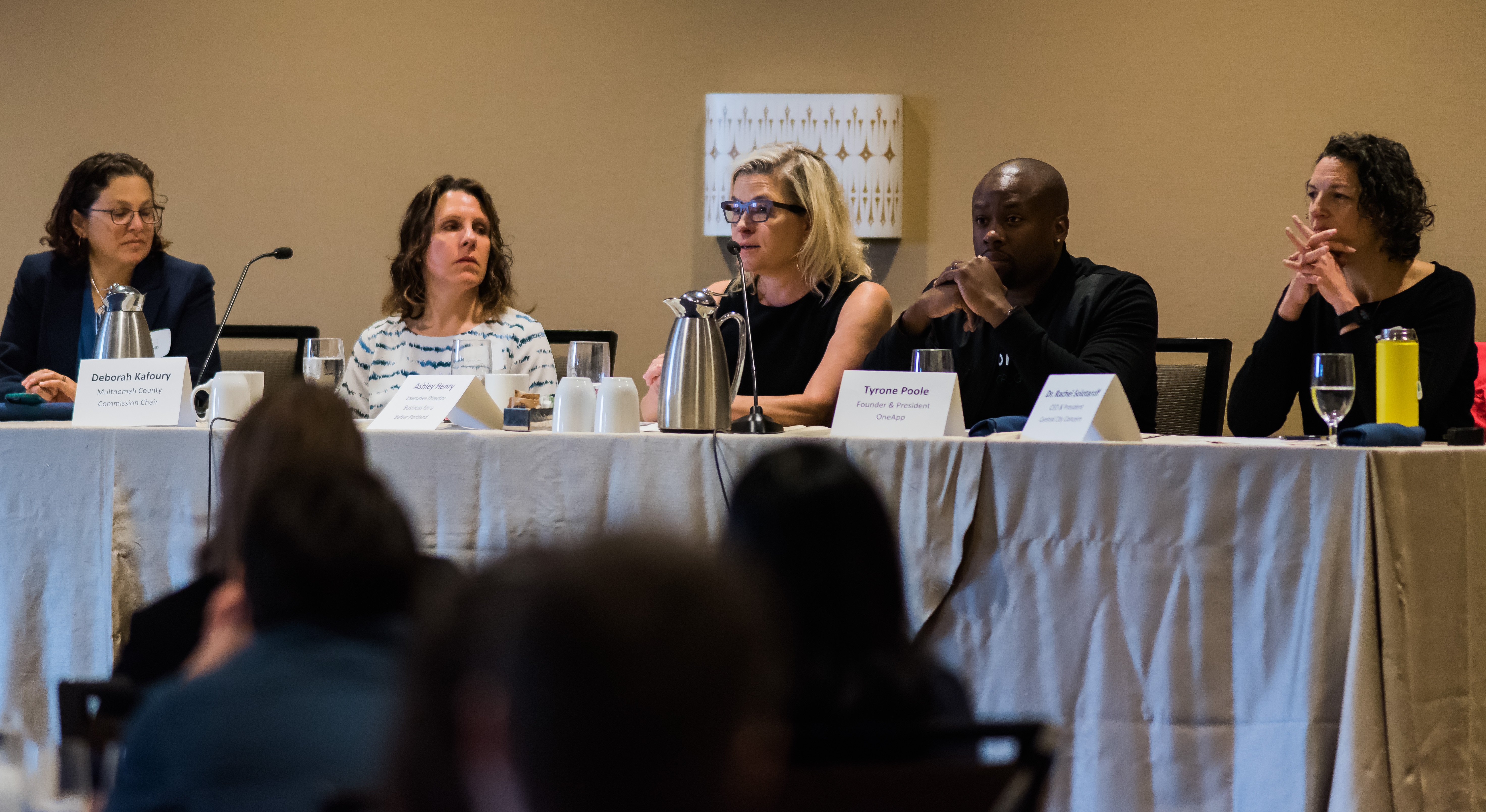 “Homelessness is caused by a lack of housing, full stop.”

It really is that simple, Dr. Margot Kushel, a professor of medicine at the University of California San Francisco, told an audience Friday morning at the Oregon Health Forum.

Homelessness, she said, can’t be blamed on an opioid epidemic or shortcomings in the mental health system.

“The solution to homelessness is to solve our housing crisis,” said Kushel, director of the university’s Center for Vulnerable Populations and director of its Benioff Homelessness and Housing Initiative. “We actually know how to treat mental health disabilities … The reason that we have this crisis is simply that we have really neglected to create and sustain housing that is affordable to all members of the community.”

And that’s been caused by years of declining government-backed incentives to build housing for people with lower incomes, said Kushel, the lead-off speaker on the panel, “Homelessness? Where Do We Go From Here?” She and other panelists acknowledged the complexities that block easy solutions to a nationwide crisis while also talking about programs that are making incremental gains.

Other panelists included Multnomah County Commission Chair Deborah Kafoury, co-founder of the Joint Office for Homeless Services and A Home for Everyone; Tyrone Poole, founder of OneApp, a Portland-based business that seeks to make applying for rental homes easier for tenants and landlords; Dr. Rachel Solotaroff, president and CEO of nonprofit Central City Concern, who has driven efforts to improve treatment of homeless people and Ashley Henry, founding executive director for nonprofit Business For A Better Portland.

Also moderating the panel, Henry said many of her organization’s 350 members work in programs to address homelessness.

About 170 people attended the forum, sponsored by the Oregon Health Forum, which is affiliated with The Lund Report.

As homelessness has burgeoned across Oregon and the rest of the West Coast, the call for solutions has intensified. But comprehensive fixes are proving elusive. Despite efforts funded by local, state and federal agencies to build more affordable housing, homelessness seems only to have worsened. Plus, housing construction is hampered by land-use restrictions and limited public money, among other obstacles. And there’s lack of agreement that a shortage of low-cost housing is, in fact, the root of the problem.

Nationwide, Kushel said, there are only about 35 units of housing for every 100 households that financially qualify for low-income housing. In Multnomah County, the situation is worse, with about 28 units for every 100 qualified — families that earn 30 percent of the area’s median income.

“What we have now is something like a disastrous game of musical chairs,” she said. “We have so many (people) in our country scrambling to find housing that they can afford. And it's not surprising that it's not working.”

Homelessness also hits some segments of society harder than others, said Kushel, who speaks nationally about the topic.

Black Americans are three to four times more likely to be homeless than white Americans, she said. That figure has historical roots, she said.

That’s been a major contributor to the wealth gap between black and white Americans, she said. Today’s fair-housing laws have done little to assist black Americans, she added, because of lax enforcement.

“As a white person, it's my obligation to stand up here and speak about it,” Kushel said. “If you’re white … I encourage you to design policies that not only are race neutral but are anti-racist.

Older Americans — those over age 50 — are a segment seen increasingly among the homeless, Kushel said.

“When I started to study homelessness, we talked about this as a problem of people who are between the ages of 25 and 44,” Kushel said. “I’m a physician. I work in the hospital. And over the years I sort of say, ‘These folks don't look like they're 25 to 44.’ In fact, I can see their birth date. And they’re not.”

“My research has shown that it's not just that people became homeless in their 20s and 30s and stayed alive and homeless, but it's in fact people losing their housing late in life.”

A 2015 study Kushel led in Oakland showed that among homeless people 50 and older, 44 percent of them had not experienced homelessness before the age of 50.

That trend has been found elsewhere in the country, she said.

These people, Kushel said, “have not had significant mental health or substance use challenges their whole life.”

The struggle to find and keep stable housing affects overall health, especially for this segment, she said.

“We have found that people who are 50 and older have health profiles that look much, much more like people who were 75 to 80,” Kushel said. “So I want to encourage you when you look at someone who's homeless and they're 51, don’t think 51. Think 75.”

Kushel suggested that people who want to help end homelessness sometimes have a simple solution before them.

“Say yes to housing,” she said.

“When someone asks you if they could build an apartment building in your neighborhood, the answer has to be yes. And it has to be to ensure that some of those apartments are set aside for people who make less than 30 percent of the median income.

“You need to explore flexible solutions. There are many people who are on the streets for lack of a few hundred dollars a month. It could be patched with what they have. In order to get them into housing, we need to be flexible and creative.”

In Multnomah County, since the Great Recession, not enough housing has been built for lower income people, and that’s made the homelessness crisis permanent, said Kafoury, the Multnomah County chairperson.

“Rents have skyrocketed. Incomes on the lower end have continued to stagnate, forcing more and more people to confront the possibility of their own homelessness,” Kafoury said. “And I know that it's hard to reconcile this when we're told that unemployment is at a record low. But when I hear from people who are struggling to get by with two even three jobs, then I'm not so sure that this economy is working for everyone.”

Kafoury pointed to a ECONorthwest study published last fall for the Oregon Community Foundation that reported 56,000 households in the Portland metro region were at risk of homelessness.

“And that's where we're at today,” she said. “For far too many people in our community, housing instability has become the norm, not the exception.”

Kafoury pointed to recent gains, however.

The Joint Office of Homeless Services, a county partnership with the city of Portland, has stepped up homelessness prevention, with more than 6,000 new households served each year.

The efforts have led to a nearly doubling of the number of people moved out of homelessness and into permanent housing each year, officials say. Agencies have also increased the number of shelter beds.

On that score, however, a man who identified himself as homeless during the question and answer portion of the forum, ridiculed the shelters and said they were a waste of money because most homeless people don’t want to stay in them. The speaker advocated for allowing more camping.

Last year, Kafoury said, the joint office served 35,000 people. Over the next 10 years the city of Portland and the county plan to create 2,000 supportive housing units. So far, 600 units have been either built or are set to be built.

“We've come a long way and it's taken an incredible amount of work and resources to get us this far,” Kafoury said. “But we know that we have so much more to do.”

The strategies are preventing and ending people’s homelessness, she said. But the strategies can’t end the housing crisis, she added.

“We still have tens of thousands of people on the edge of homelessness on any given day in our region and it's up to us to be there for them,” she said. “To help them stay in their housing or if they become homeless, to get them back into housing as quickly as we can.”

Homelessness is an emergency that emerged five years ago and there is no end in sight, Kafoury said.

One way to ease the crisis is to streamline the process for homeless people to seek housing, said Poole, who became homeless shortly after an injury temporarily derailed his life.

Poole recounted quickly qualifying for government rent assistance after entering a homeless shelter. But he recounted a dispiriting exercise of applying for the limited number of housing units for which he was qualified. He developed OneApp, he said, to help make the application and approval process easier for qualified homeless and the landlords who will rent to them.

Solotaroff, of Central City Concern, said price and scarcity are among the main reasons homeless people can’t find permanent housing. She noted that the median price for an apartment in Multnomah County is $1,500. To afford that, a full-time worker would need to earn $24 an hour, she said.

“As you can probably imagine, not many people have that,” she said. “So we have a tremendous problem around that sort of lethal intersection of rent and affordability and homelessness.”

Stop assuming every person is entitled to their own apartment

Dr. Solotaroff's comment about needing to earn $24/hour to afford a $1500/month apartment seems idealistic. Many people share houses or apartments to make ends meet. The cost drops dramatically when sharing a 2 or 3 bedroom house or apartment.