Komen Comes Under Attack for Accepting Money from Fracking Corporation

Local environmental groups are urging Nancy Brinker not to accept the $100,000 donation at the Pittsburgh Steelers’ game this Sunday, while petitions are gaining momentum nationwide.
By:
Diane Lund-Muzikant 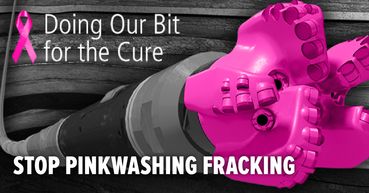 What’s gotten into the Susan G. Komen Foundation? Environmental and breast cancer activists throughout Oregon are questioning why its founder, Nancy Brinker, has agreed to accept a $100,000 donation from a leading global fracking corporation, Baker Hughes, at the Pittsburgh Steelers’ game this Sunday. The company intends to hand out 1,000 pink drill bits at that game.

Fracking is considered a toxic process – with at least 25% of the chemicals during the process linked to cancer.

“Komen’s decision to accept large chunks of money from polluters is a slap in the face to everyone woman and her loved ones who have had to deal with breast cancer,” said Lisa Arkin, executive director of Beyond Toxics in Eugene, which empowers Oregonians to protect their environmental health by exposing the root causes of toxic pollution. “The chemical pollution caused by fracking is tied to serious diseases including cancer. Komen should be seeking breast cancer prevention, not cozying up with companies that dump carcinogens into drinking water and air sheds. These same companies are using money to silence criticism, and to obstruct those who call for stronger pollution regulations to protect health.”

Fracking is dangerous because it not only introduces many chemicals and toxic substances, including radiation, but may be contaminating ancient sources of ground water, according to Portland community activist Caroline Skinner of Portland who called Komen’s decision to accept money from a fracking corporation into question.

“So we are introducing chemicals that go who knows where, that will last who knows how long,” said Skinner, who served on the board of Rachel’s Friends Breast Cancer Coalition. “We are once again foisting off our short-term energy gains onto future generations who might well end up cursing us for leaving them a big toxic legacy. Water is one of life's essentials. We need to continue to press harder for more gains via conservation and sustainable energy sources, and we need to do more to manage the many safety risks of the fracking process.”

Jenna Hasenkampf, who was diagnosed with breast cancer at age 30, said she’s disappointed that Komen continues to partner with companies that are “basically anti-health in their efforts to supposedly educate and cure breast cancer. I didn’t think they could do worse than KFC. Low and behold now we have pink fracking drills.”

Komen came under sharp criticism after collaborating with Kentucky Fried Chicken with its “Pink Bucket” campaign” several years ago to raise awareness and raise funds for breast cancer.

In its defense, Andrea Rader, managing director of communication for Komen, told The Lund Report, “Baker Hughes employees have supported women and men with breast cancer for many years through participation in Susan G. Komen’s Race for the Cure series. An employee suggested last year that the company paint its drill bits pink as a show of support for people with breast cancer. They also provide educational breast cancer materials to employees and customers. Baker Hughes makes a flat donation to Komen, not tied to sales of the pink drill bits or any other product. We appreciate the participation and commitment of the people of Baker Hughes, for their efforts to show support for women and men facing breast cancer.”

But Komen’s defense hasn’t stopped national groups such as Breast Cancer Action from calling on people sign petitions urging the organization to turn down those dollars, and they’ve already gathered more than 100,000 signatures.

“By taking money from these companies and giving them permission to use your name, you are complicit in a practice that endangers women’s health,” Karuna Jaggar, executive director of Breast Cancer Action in San Francisco, told Komen officials. “You have created a perfect profit cycle whereby Baker Hughes contributes to causing the very disease you raise money to cure. This is unacceptable to us. Our health is not for sale. We are outraged that as the largest breast cancer organization in the world, you are partnering with a fracking corporation that is poisoning our health. Pink drill bits are a pink washing publicity stunt.”