Infant Given Formula at Kaiser Sunnyside without Permission of Parents

The parents want to know why this happened since Kaiser Sunnyside is the only Portland hospital to have earned the distinction as Baby Friendly
By:
Diane Lund-Muzikant

August 24, 2012 -- When Jo Sampson got pregnant, she and her partner, Cathy Cuff, were determined to have a home birth. But after 36 hours of grueling labor, Jo had to be transported to Kaiser Sunnyside Medical Center where her baby was delivered by Caesarean section. 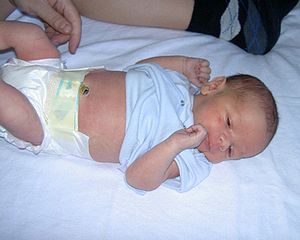 Jo had always planned to breastfeed, but two days after giving birth to Finnegan Cuff-Sampson, her milk still hadn’t come in, and the baby had started losing weight.

That’s when the nurses at Kaiser Sunnyside intervened. After the parents said it was okay for Finnegan to be taken to the nursery so they could get some sleep, the nurses gave the baby formula – without their consent.

In fact, they only learned later – from their pediatrician – that this had occurred.

“Even though Jo’s milk hadn’t come in, we had a plan to supplement our son with donor milk from Jo’s sister,” said Cathy, who’s been in contact with Greg Sabin, the director of maternal child and women’s health at Kaiser Sunnyside. “We feel hurt and disrespected by the nurses who decided they somehow knew better for our son than we did; such an assumption is very dangerous and damaging. Finnegan was lovingly planned for, and
his arrival was celebrated. We are smart, resourceful parents, and no one has the right to decide for us what is best for our son. These nurses decided to just act and then apologize later for their actions. This is a despicable way to deal with such a precious important
decision.”

Sabin, who couldn’t discuss this case with The Lund Report because of HIPAA regulations, insisted that Kaiser takes such complaints seriously and is looking into what happened. “How we respond depends on the results of the investigation,” he said.

“One of the reasons,” she said, “is if a baby loses too much weight and a mom’s milk isn’t in yet.” At Kaiser Sunnyside, 98 percent of the mothers choose to breastfeed.

Meanwhile, since going home July 17, Finnegan has been thriving. “He’s growing like crazy,” said Cathy, who’s still not happy about what happened. “It’s disappointing to us. When we couldn’t deliver the baby at home, we thought Kaiser was a good choice
because of its Baby Friendly designation. But now Kaiser is trying to put a foot in each corner and dance around this. We want answers. Was it really medically necessary for Finnegan to be given formula? We had a plan for donor milk, a much better plan, but no one asked us. Even our pediatrician said it was a good plan. What’s happened has been disappointing. I want to know what Kaiser’s going to do about this”

Cathy also wants assurances that Kaiser will retrain its nurses so other parents won’t have to endure something like this. “We’re two educated women; we don’t want to see this happen again. To Jo and me, the largest injustice was the basic lack of respect for us as parents.”

Since 2000, Kaiser Sunnyside has been the only hospital in the Portland area to earn the distinction as Baby Friendly Program sponsored by the World Health Organization and the United Nations Children’s Fund, which gives special recognition to hospitals that encourage women to breast feed.

To learn more about the Baby Friendly designation, click here.

Kaiser Sunnyside Medical Center also has one of the lowest C-section rates. At 21.4 percent, it ranked fourth in the state in 2010 among Oregon’s 51 hospitals. The statewide average that year was 29.4 percent, and the national average 32 percent. For more information, click here.

Image for this story by Thomas Netsch (public domain) via Wikimedia Commons.