April 12, 2013 -- Oregon’s two major for-profit hospitals had some of the strongest profit margins in the state in 2011, behind only Legacy Meridian Park Medical Center, according to details revealed in this sixth installment in a series examining the state of Oregon hospitals.Today The Lund Report concludes the first portion of its hospital finances series by reviewing a five mid-Willamette Valley and central Oregon Coast medical centers, including many that are outside the nonprofit norm for the state. Two are for-profit hospitals, one is voter-owned and known as a district hospital, while two are part of a relatively small regional nonprofit. 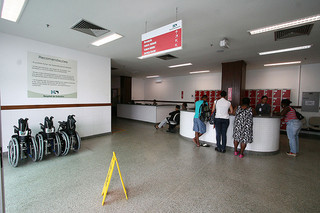 This sixth story provides the final snapshots of Oregon acute-care hospitals that pay a 4 percent tax on net revenue. These 26 hospitals receive higher Medicaid reimbursements than those that do not pay the provider tax. The first five stories in the series covered:

Beginning next week, The Lund Report will tackle the second half of its hospital finances series by delving into questions surrounding executive compensation, charity care and the effectiveness of Oregon’s provider tax.

Samaritan Health Services serves the mid-Willamette Valley and central Oregon Coast with hospitals, clinics and senior living centers. The Corvallis-based nonprofit was founded in 1997 when Mid-Valley Healthcare and Samaritan Inc. merged in an effort to more effectively and efficiently serve their communities. Over the years other organizations have joined Samaritan Health, which now operates five hospitals – two of which pay the states’ hospital provider tax, and thus are included in this series. Samaritan Health reported net income of $24.7 million in 2011, up from $4.1 million a year earlier.

President and CEO Larry A. Mullins received 2011 base pay of $578,681. Add in other forms of compensation and he actually earned more than twice that much. He received $672,392 in deferred compensation – typically awarded to executives while they are working, then paid out later for tax purposes. He received $24,897 in nontaxable benefits, $6,000 in bonuses and $100,965 in what Samaritan calls “other compensation” – bringing his total compensation for the year to $1,382,935.

With just 70 staffed beds, Samaritan Albany is one of the smallest acute-care hospitals featured in this story (second to Providence Milwaukie Hospital). Though relatively small, the hospital has more than 700 employees. Its joint replacement program was recognized as one of the top 10 percent in the country in both 2011 and 2012.

Bay Area Hospital is neither nonprofit nor a for-profit business. Instead, it’s operated by a public hospital district and owned by local residents. The Bay Area Health District was created in 1952 via a Coos County vote, and its hospital was completed in 1974 after voters approved a $6.75 million levy to fund its construction. It’s grown several more times since then, and in February, the hospital opened a $45 million, 110,000-square-foot expansion aimed at transforming Bay Area into a “hospital of the future.” Today the hospital is funded through gifts and program revenue, and receives no tax support.

Bay Area Hospital CEO Paul Janke received a 2012 base salary of $339,497.60, plus a $600 bonus – the same amount that all full-time hospital employees received when Bay Area exceeded its budget targets. His 2011 salary was $329,617.60. (Janke’s 2012 salary is already available under Oregon public records law because Bay Area Hospital is a public district; salaries for most other executives in this series come from tax filings that so far only include pay through 2011.) Hospital officials said at that time constraints prevented them from providing details of Janke’s benefits ahead of the deadline for this story. They said they would report that information ahead of an upcoming Lund Report article that will delve into hospital executive pay in greater detail.

As a for-profit company, Springfield-based McKenzie-Willamette Medical Center a rarity among Oregon hospitals, which are mostly nonprofit. McKenzie-Willamette is owned by a partnership that includes physicians on its hospital’s medical staff. Because it is privately owned, McKenzie Willamette is one of the few large hospitals in Oregon that is not required to publicly disclose how much it pays to its executives.

Tennessee-based Capella operates 12 acute-care hospitals in primarily non-urban areas across six states, and also operates clinics. The company reported a $12.8 million net loss in 2012, on revenue of $747.6 million. Its 2012 net loss was $13.3 million, on revenue of $683.9 million.

Although the salaries of Willamette Valley Medical Center’s executives are not public record, the hospital’s parent company does report the compensation of its top leaders. Capella’s CEO Daneil S. Slipkovich received $633,333 in base pay in 2012, plus a $300,000 incentive payment and $4,562 in other compensation, bringing his total compensation to $937,895 for the year.

Reporter Courtney Sherwood can be reached at [email protected].

Image for this story by Secom Bahia (CC BY 2.0) via Flickr.