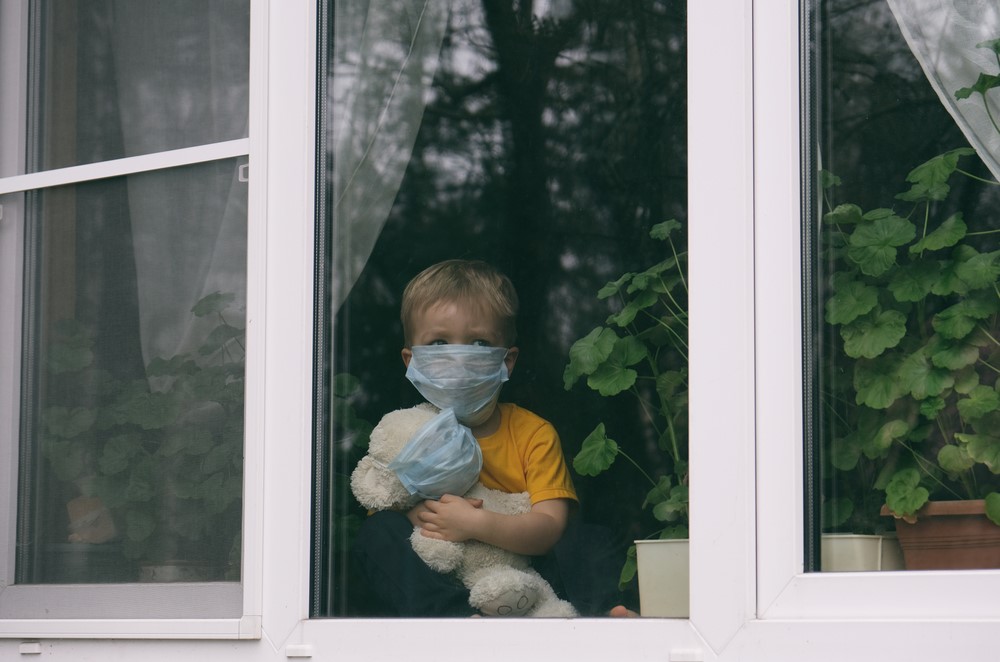 The virus is spreading among children./Shutterstock

New COVID-19 case counts have plummeted in Oregon, but the state is experiencing a change in who is testing positive. Since January, the share of new cases in Oregonians aged 10 to 19 has grown by roughly 50% while the proportion of those aged 20 to 50 has shrunk, according to an analysis by The Lund Report.

This shift appears to be part of a national trend. Nationwide weekly data collected by the American Academy of Pediatrics show a similar rise in the percentage of new cases in the young. Hospital admission data exhibit the same pattern: The fraction of patients admitted to a hospital for COVID who are under 19 has nearly doubled since January.

Still, adults account for the vast majority of hospitalizations. Reports by 48 states and Washington D.C. to the U.S. Department of Health and Human Services show there were more than 2.3 million suspected or confirmed COVID hospital admissions in adults since last Nov. 1 through last Saturday. That compares with 81,300 hospitalizations in children. 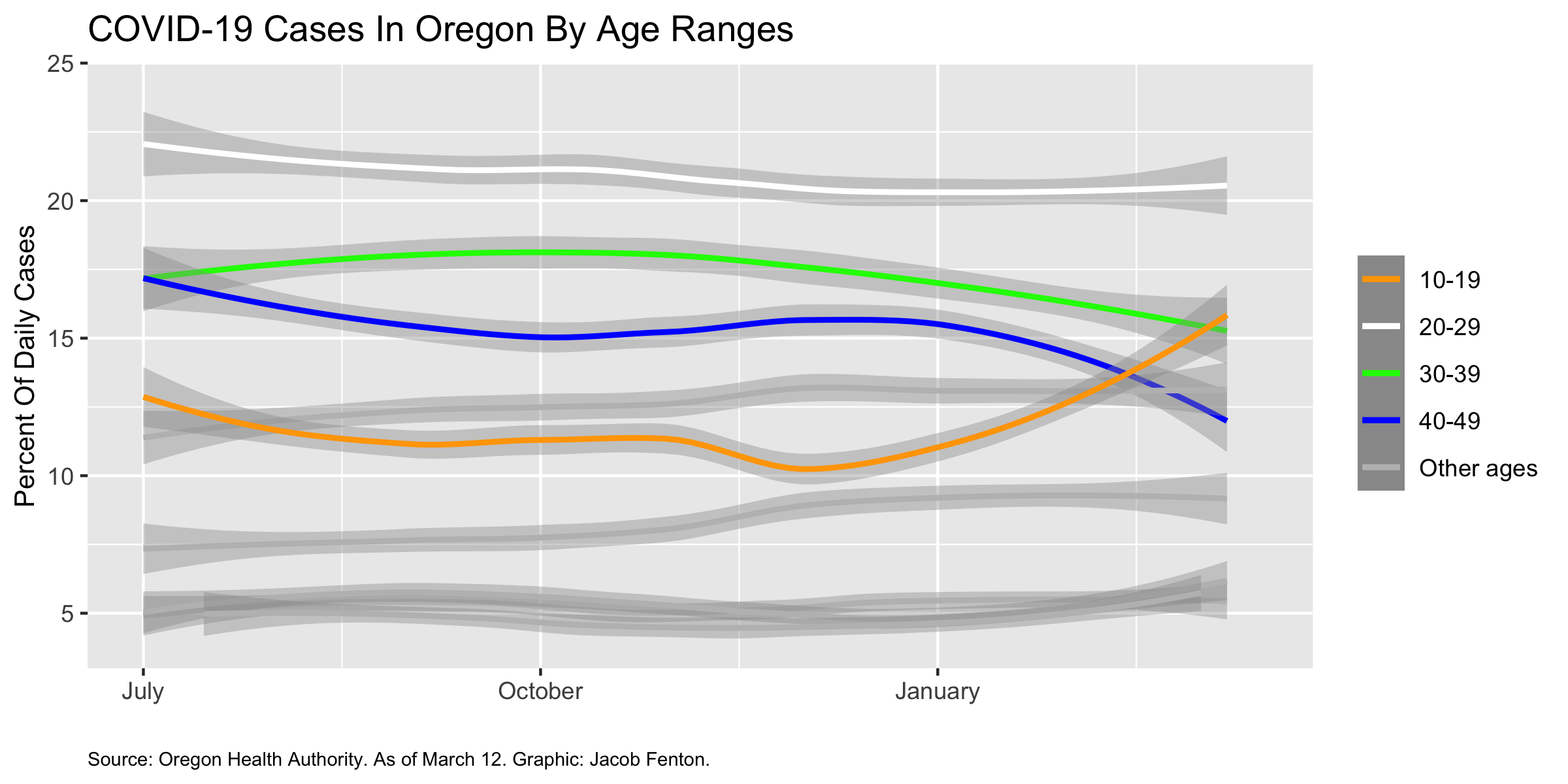 Unlike elderly adults, which face the highest risk of death and severe disease from COVID, the vast majority of children experience only mild symptoms, most commonly cough, fever, headache and runny nose. Also, just two Oregonians younger than 20 have died. In contrast, about 470 between 50 to 70 years old have died, and there have been just over 1,780 fatalities among those aged 70 and over.

The changing case demographics come at an awkward time for policymakers set on reopening schools. Limited data on the severity of variants in children make it hard to rule them out as a contributing factor. There’s no national dataset of school attendance policies, and few useful metrics on child behavior, leaving researchers without key tools.

But the same circumstances also offer hope: This early evidence suggests the vaccines are working. It’s not so much that kids are getting hospitalized any more, it’s that the elderly are getting sick less. A study of nearly 600,000 vaccinated Israelis published in the New England Journal of Medicine found that in the first few weeks after the first shot of immunization, severe COVID cases fell more quickly than overall infections.

Also in Israel, which has the world’s highest rate per capita of vaccinated people, there’s been a sharp rise in cases in Israeli youth, according to a report last month in the British Medical Journal. The journal also reported that 60% of cases in a village in northern Italy were found in “children of primary or infant school age.” That trend has prompted concern among Italian health care professionals.

The trend’s been much less visible in the U.S., in part because of data collection problems dating to the Trump administration. 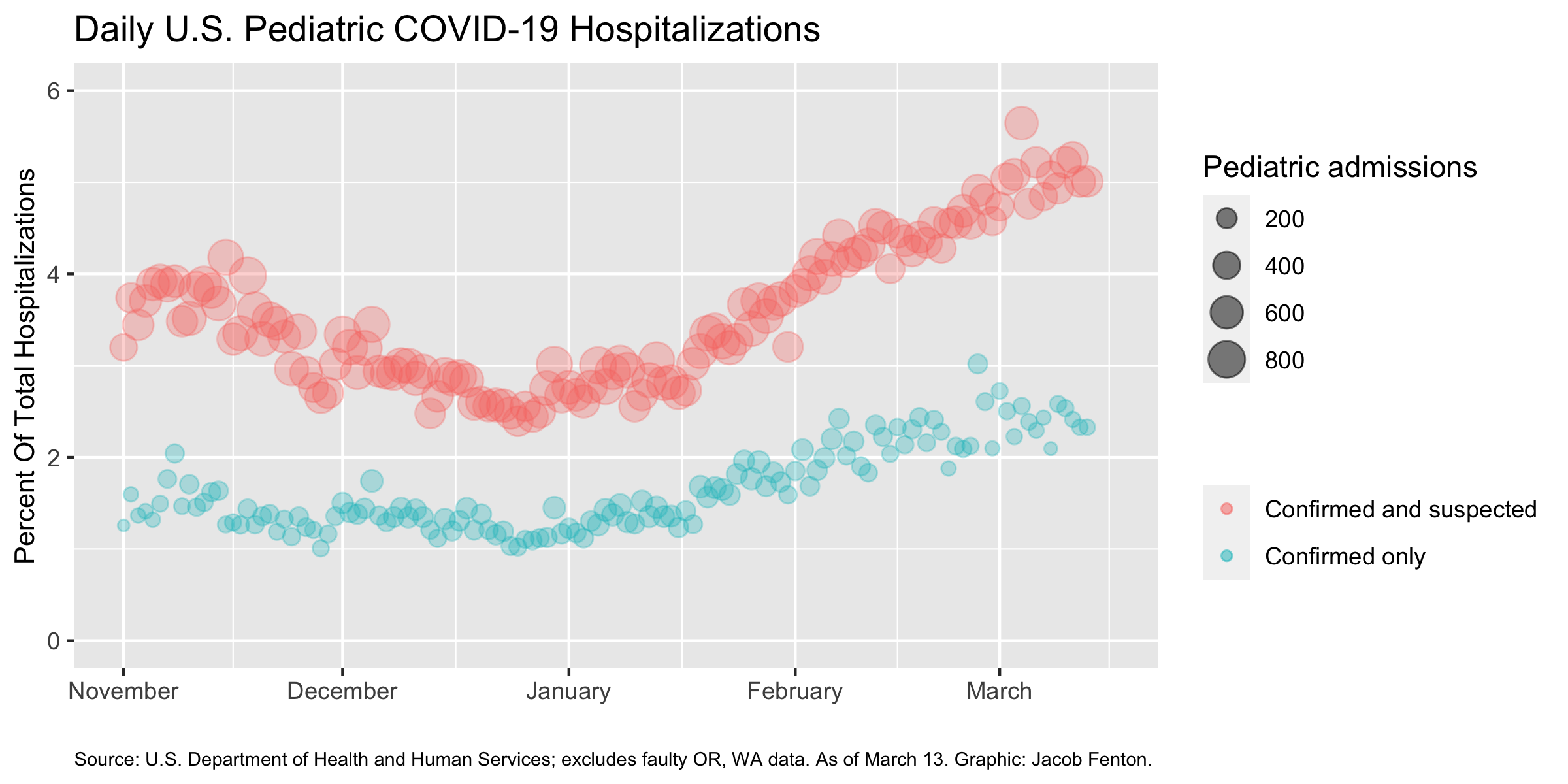 But when The Lund Report shared its analysis with researchers, they said it might very well be that the vaccines are having an effect.

“It makes sense,” said Dr. Sean O’Leary, vice chair of the American Academy of Pediatrics' Committee on Infectious Diseases. “We don't have any hard data saying that's what's happening, but it makes sense that we may see some shifting demographics” as a result of mass immunizations, he said. “We know the vaccine works.”

The rate of pediatric COVID “has climbed steadily through the pandemic, which probably represents a real rise in children getting infected relative to older populations, not that the virus is getting more severe in children,” O’Leary said, although the increase last spring and summer probably represented added testing capacity. The U.S. has been somewhat successful at cutting the spread among seniors, he added.

In Oregon, the last state in the country to vaccinate seniors living in the community, health officials have administered at least one dose to more than 410,000 people aged 65 and over, according to the Oregon Health Authority. That's just over 50% of that population based on estimates by Portland State University's Population Research Center.

But immunizing those who are already hunkered down may have less impact on cutting virus counts overall than vaccinating those who are most at risk, like essential workers. Case counts have fallen farthest in those aged 20 to 50, which includes a large fraction of those vaccinated in Oregon first: medical workers and teachers.

Another factor to consider is the spread of variants -- from Britain, South Africa and Brazil -- and ones emerging in the United States.

“I'm not aware of any strong evidence suggesting that any of these variants are either any more severe in children than the variants that have been circulating in the U.S. or that they are disproportionately more infectious in children than adults compared to prior variants,” O’Leary said.

With so many competing factors, the relative weight of each is hard to untangle. But some of the most commonly cited factors for a rise in cases among younger people -- the timing of household spread, availability of testing and the role of college students -- seem unlikely to wholly explain the trend.

Cases in college students are a clear contributing factor, said Dr. Chunhuei Chi, professor of international health at Oregon State University and director of its Center for Global Health. OSU saw a substantial rise in COVID cases on its Corvallis campus in February, although the numbers have fallen in recent weeks.

Chi said OSU was testing every student who lived in the dorms weekly, noting that simply testing more frequently is likely to turn up a greater fraction of asymptomatic cases that might otherwise have slipped under the radar. Chi said he’s talked to students who’d caught COVID multiple times, and said mild cases of COVID may convey a much shorter period of natural resistance. (O’Leary, of the American Academy of Pediatrics, said that this was possible but not clearly established by research.)

OSU’s approach isn’t the only way colleges are confronting the COVID crisis. COVID case counts at Portland State University have largely followed trends in the city, said Dr. Mark Bajorek, the university’s director of health services. Testing is voluntary and has dropped from 30 to 40 tests a day at the epidemic’s winter peak to five to 10 of late. Bajorek noted some students with possible exposure but no symptoms were less than enthusiastic about getting tested: “do I really want to know?” some asked.

Disentangling the impact of collegiate COVID cases is hard, but a national collection of case counts among the young conducted by the academy provides a natural experiment. Most states track children as being either under 18 or under 20. Comparing the two tells us something about what young adults aged 18 to 19 are up to. 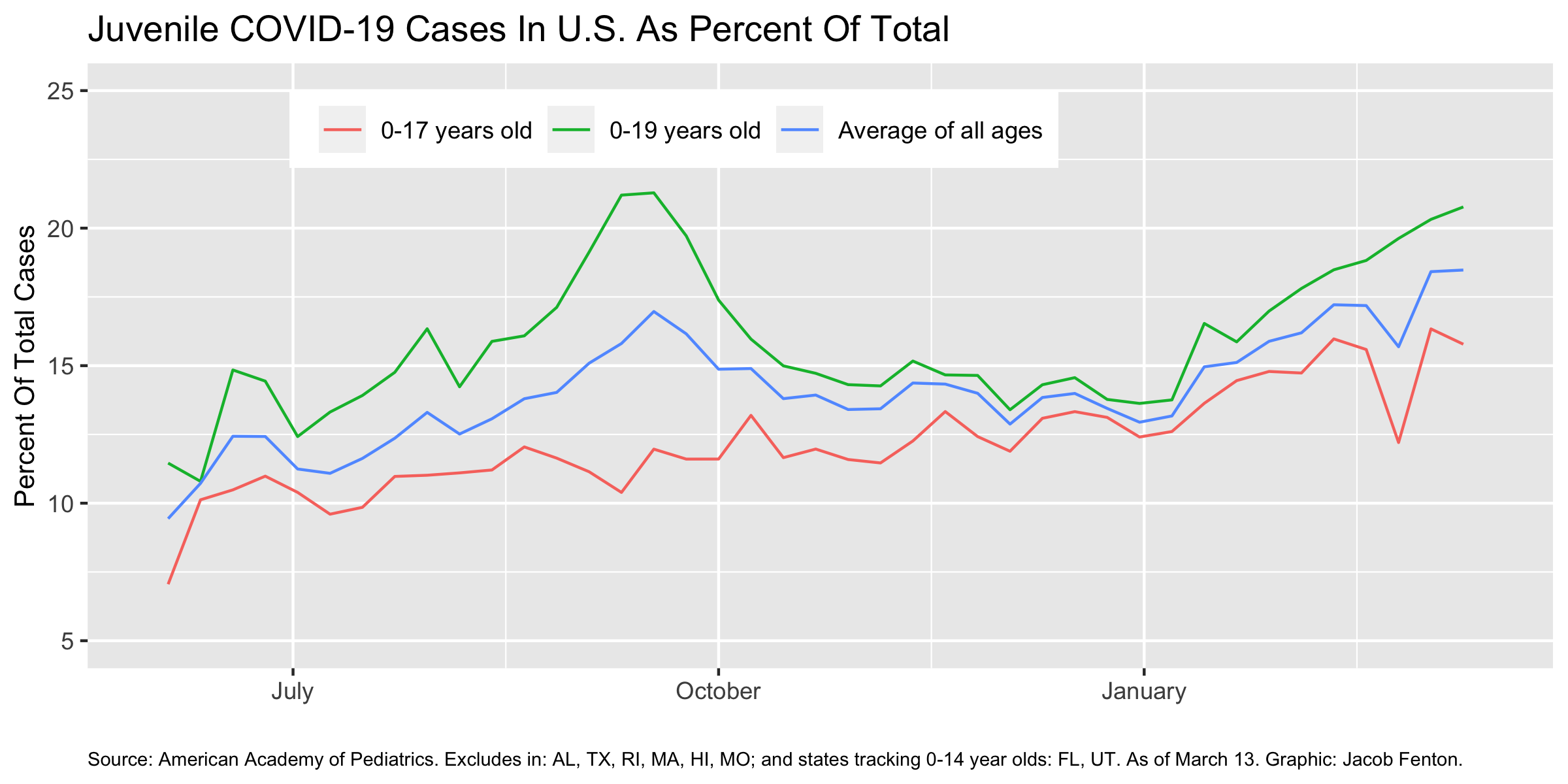 Another contributing factor to the case count is timing. In Oregon, cases among children have often peaked a week later than in adults, a trend that appears to reflect patterns of testing (children get tested after an adult tests positive) and transmission. Oregon’s most recent report on COVID in children, from January, found that 47% of cases in children came from household spread as opposed to 20% in adults.

With kids’ cases lagging adults,’ it’s just simple math that the share of cases in kids would rise as the adult cases decline. But this trend should vanish about a week after cases have levelled out. But that’s not happened: To date, the trend has persisted in Oregon even after case counts have stopped falling as fast.

Data on who’s getting seriously ill from of COVID in Oregon are less complete. Federal hospitalization records in both Oregon and Washington have errors in the count of children admitted with suspected COVID every day for at least the last four months. Before Oct. 19, Oregon never had more than 15 children admitted with suspected COVID in a day. Every day since, the state has reported having more than 30, even though that makes no sense whatsoever when compared to the trend in adults.

Bill Hall, a deputy assistant secretary for public affairs at the U.S. Department of Health and Human Services, acknowledged the issue and said a data quality team was reviewing it.  But he didn’t respond to questions from The Lund Report about how it had occurred or when it would be fixed. Politico also reported last week that the agency’s inspector general was probing data collection failures at the U.S. Centers for Disease Control and Prevention. It said that the lack of race data in case counts under the Trump administration was the initial focus.

Some states have been certified to collect data directly from hospitals and pass it on to federal agencies -- but not Oregon or Washington. An HHS document notes that Oregon was “in process” for certification in December.

Jonathan Modie, a spokesman for Oregon’s Health Authority, declined to say what the state’s reporting status was or shed any light on where the erroneous data came from.

A more comprehensive view of who’s being hospitalized should be possible in the United States. HHS has requested that hospitals provide COVID admission counts in 10-year age ranges. But these data are absent from state files and not usable in facility-level files, which redact patient counts less than four.

Hall declined to respond to questions about this.

Perhaps the biggest source of uncertainty, though, is the role of variants.  Just a fraction of confirmed COVID cases are being sequenced in Oregon right now.

Oregon State is sequencing about 100 to 200 cases a week, including wastewater samples, according to Brett Tyler, director of OSU's Center for Genome Research and Biocomputing. “We have not detected any variants of concern  (i.e. UK, Brazilian, South African) recently,” he said by email.

At Oregon Health & Science University scientists aim for 200 or 250 sequences a week; researchers at the University of Oregon are analyzing 25, though its lab could ramp up, a spokeswoman said.

That’s not enough analysis to provide a clear picture of trends.

The New York Times estimated Oregon has sequenced less than 2% of cumulative cases to date.

In January, OHSU found that the variant B.1.1.7, sometimes known as the British variant, has emerged in Oregon. Since then, OHSU researchers found a novel variant in Oregon with a feature -- fittingly known as “eek” -- that researchers believe may make it more resistant to the vaccine. Even as case counts have fallen, the B.1.1.7 variant case count has grown, with some estimating that it will be the dominant form of COVID-19 in the U.S. as early as this month. A dashboard from genomic testing company Helix found the B.1.1.7 variant in about 30% of samples last week.

Limited sequencing in the U.S. has reduced the country’s ability to know for sure what is going on, said Dr. Maureen Hoatlin, a biomedical consultant and recently retired faculty member at OHSU. What happens in Europe is often observed later in the U.S., she said by email.

In Italy, doctors specifically raised the alarm over the possibility of the B.1.1.7 variant spreading more widely in children.

“We are flying blind in the U.S. with regard to the variants,” Hoatlin said

You can reach Jacob Fenton at [email protected] or on Twitter @jsfenfen.

For more details, check out the analysis notebooks on the data used for this article from U.S. Department Health and Human Services, the American Academy of Pediatrics and the Oregon Health Authority.

Mar 15 2021
News source:
The Lund Report
Keywords:
COVID-19, vaccine, variants
×
This article is for premium subscribers. If you are one, please sign in below.
You can see two more premium stories for free. To subscribe, click here. We depend on premium subscriptions to survive, and they are tax deductible.
Sign InGo Premium Not now