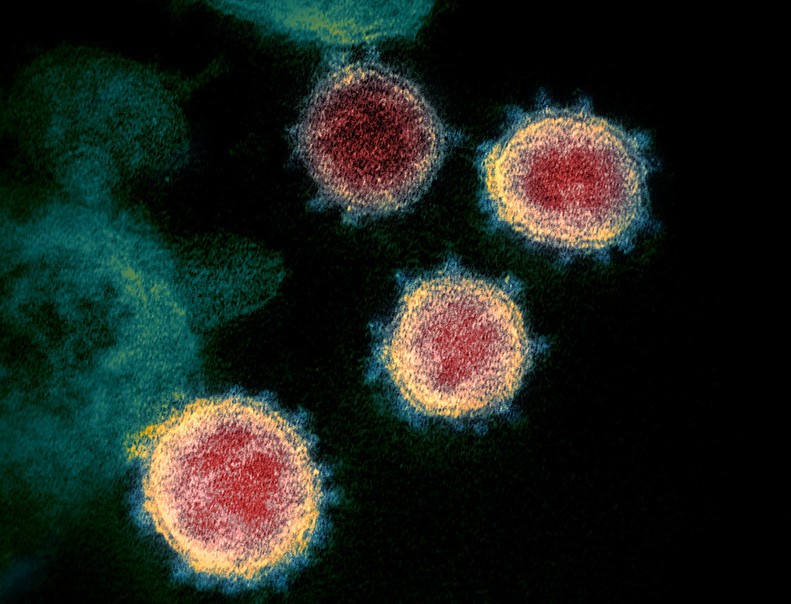 A microscopic photo shows the novel coronavirus emerging from cells./National Institute of Allergy and Infectious Diseases

Viral sleuths in Oregon have been tracking mutations in the novel coronavirus since last spring. They found nothing until recently, when Oregon Health & Science University discovered a highly infectious variant that originated in Britain last fall.

A lead researcher at OHSU told The Lund Report that the variant, named B.1.1.7 by scientists, came from its latest batch of genomic sequencing on test samples from infected patients. It was collected in late December.

It’s not clear where the person lives or whether they had a travel history. The OHSU lab that does the genomic testing receives anonymous samples that are shielded by privacy protections.

But this month the Oregon Health Authority announced the state had three positive cases -- from Multnomah, Washington and Yamhill counties -- that were found by scientists out of state. Only one person, from Washington County, had traveled outside the United States.

Virus trackers are not surprised that a worrying strain has turned up in the state. They knew it was a matter of when -- not if -- that would happen.

Like all viruses, the coronavirus changes over time as it replicates in the body. Sometimes it makes mistakes -- just as other cells do. DNA errors during replication play a major role in cancer, for example.

If a mutant version has a characteristic that enables it to spread faster -- as the British and two other variants do -- it can push out other versions and infect more people, increasing the disease and death toll.

The British strain, which is believed to have emerged last September, was identified by scientists in the United Kingdom in December. British scientists say B.1.1.7 is at least 30% more infectious, and could be more deadly, though the evidence for that is weaker. It has become the dominant strain in Britain and traveled to more than 30 countries, including the United States. As of Jan. 13, the Centers for Disease Control and Prevention had identified more than 75 cases in 12 states.

The CDC predicted that in March it would become the main strain in the United States.

Another worrying strain, known as P.1 that was identified in Brazil, also has traveled. On Monday, Minnesota health authorities said that a person there who had visited Brazil was infected with it. Japan also found the strain in four people who had traveled to Brazil.

A third strain, B1.351, which was first identified in South Africa and has emerged in Zambia, just appeared in South Carolina. Authorities there announced two cases on Thursday and said that neither person had traveled outside the country, indicating the variant was spreading in the community.

The United States has also spawned its own worrying variant which was announced in Southern California a week ago. Dubbed B.1.426, it is rapidly spreading.

Masks and social distancing can help keep these strains at bay, and vaccines appear to be protective, although scientists are still studying that issue.

These variants are worrying because they have mutations in the spike protein -- the spiky protuberances on the surface of the virus that allow it to attach to cells.

“Each time the virus reaches out and grabs for a cell, it’s not always successful so if a spike protein gets a mutation that allows it to grab on extra well, like in the U.K. strain, that increases the chance that it can get into a cell and spread,” said Brett Tyler, director of the Center for Genome Research and Biocomputing at Oregon State University.

The strains emerged separately, but the British, South African and Brazilian strains have a mutation called N501y in the region where the spike protein binds to cells.

That mutation appears to give them an edge in attaching to cells, allowing them to slip inside and replicate.

The emergence of the mutations has raised questions about whether existing vaccines will be effective in neutralizing them. The two approved for emergency use in the United States -- made by Pfizer-BioNTech and Moderna -- and those in development, prompt the body to create antibodies that target the spike protein. The fear is that changes to the spike protein could hamper the vaccines’ ability to thwart the virus.

There are many unknowns, but so far scientists do not forecast that the variants will largely resist the vaccines.

“The spike protein has many sites on it,” Tyler said. “If you cover up one of them or block one of them with a mutation, there might be other places for the antibodies to hook onto.”

But the changes could render antibody-based treatments of people infected with the virus less effective.

“Any version of the virus that has a mutation in the region where those antibodies bind could potentially not respond to that therapy,” said Dr. Ben Bimber, an assistant professor at OHSU, who is also working on genetic testing.

Bimber and other researchers at OHSU conducted their first genetic analysis of the novel coronavirus, SARS-CoV-2, in April by sequencing samples from people tested by an OHSU lab.

“We began this by getting their leftover material from the positives, and so we kind of piggybacked on their operation, which was very advantageous,” Bimber said.

Since then the university’s SARS-CoV-2 genome sequencing lab has analyzed the RNA of more than 1,500 samples. RNA carries the blueprint for the replication of the virus.

Besides checking for potentially threatening variations, the analysis is useful in tracking the virus’ movement.

“The changes that we can pick up may help identify instances of spread that would not have been practical otherwise,” Bimber said.

“We’re able to identify near full genome coverage, which is important because mutations could happen everywhere,” Bimber said.

Origins Of Virus In Oregon

Early research indicated there were two main origins of the virus in Oregon -- one from Europe and another traced to British Columbia, Bimber said.

Though researchers have expected to see the same dominant strains in Oregon, Washington and California, that’s not been the case. Instead, the virus in Oregon developed a separate identity.

“Even as late as October and November, the virus circulating at least in the Portland metro area was distinct from neighboring states,” Bimber said. “There is certainly some geographic identity.”

The analysis can identify emerging variants. It has also recorded cases when one person had two different versions of the virus.

At OSU, Tyler’s lab has found members of the same household infected with different variations of the virus. Since May, his lab has analyzed more than 1,100 samples. Some have been collected by researchers going door-to-door, asking volunteers to self-administer a COVID-19 test as part of the university’s TRACE project. But most have come from the project’s wastewater sampling. OSU obtained a $1.2 million grant from the Oregon Health Authority to expand its project around the state.

“It’s a very, very powerful method,” Tyler said of the wastewater sampling. “It can screen large populations of people at once. We do have to sample regularly because when we sample, we just get a snapshot of what’s passing through the pipe at that moment.”

He said he’s been shocked by how rapidly the virus has spread. He said there’s one mutation that pops up a lot -- but it doesn’t show mutations in the spike protein.

To discern changes, Tyler’s lab compares each sequencing to the one first analyzed in China.

“That’s the ancestor of all of the strains,” Tyler said.

The virus is believed to have hopped species, from a bat to humans. Scientists say that initially it wasn’t well adapted to humans but it has continued to evolve.

The potential discovery of variants that could undermine the vaccines has put scientists on high alert. Experts from around the world -- from the United States to Europe to Sudan and Africa -- are involved in sequencing data which are uploaded to an open source project, called Next Strain. OHSU is among the many contributors to the project.

The collaboration is impressive, Bimber said.

“There is essentially one international dataset of virtually all of the SARS-CoV-2 that’s been sequenced,” Bimber said.

The Oregon Health Authority, which has a public health lab, does not have the ability to do the genomic sequencing on COVID-19 samples. That requires programming sensitive robots to make precise movements to shift compounds around without making a mistake or breaking something. The work is highly specialized. OSU’s lab calls its expert the “robot whisperer.”

The analysis also requires a sequencing machine that can cost up to $1 million, Tyler said. The robots can cost $250,000, and labs have to pay for maintenance.

The dropout pattern is picked up by a PCR test made by Thermo Fisher Scientific. Called the Thermofisher TaqPath test, it is commonly used at large laboratories. The health agency has distributed several of the devices needed to run the test and more than 300,000 of these tests to labs statewide, a spokeswoman said.

The Oregon Health Authority has asked them to notify the public health lab when the dropout shows up so the state can arrange for genetic testing.

“One of things we’re looking at is to really speed our screening of strains for any changes in the spike protein gene,” Tyler said.

Though the state’s public health lab hasn’t done any sequencing on SARS-CoV-2, it has sent 45 samples to the Centers for Disease Control and Prevention for a nationwide surveillance project launched in November, a spokeswoman said. The CDC project is still ramping up. At the moment, it can only handle 750 samples a week nationwide, the health authority said.

Scientists say that the fractured genome sequencing of the virus in the United States has put the country at a disadvantage.

OHSU has done some testing for Multnomah County but it’s hoping to work more closely with the health authority with its statewide reach. OSU is also angling for stepped up cooperation with the state, OHSU and the University of Oregon, which is piloting its sequencing program.

The idea would be  to expand the sequence testing of the virus,” Tyler said. “There is a lot of capacity at the three research universities to do this kind of sequencing.”


Jan 28 2021
News source:
The Lund Report
Keywords:
sars-cov-2, coronavirus, ohsu, OSU, Oregon state, oregon health authority, variant
×
This article is for premium subscribers. If you are one, please sign in below.
You can see two more premium stories for free. To subscribe, click here. We depend on premium subscriptions to survive, and they are tax deductible.
Sign InGo Premium Not now