He was injured over the weekend, and his prognosis is uncertain.
By:
Diane Lund-Muzikant 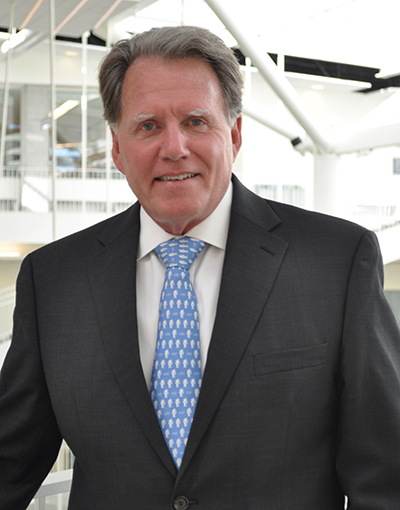 Dr. Mark Richardson, dean of OHSU School of Medicine, was critically injured while doing a home repair, and is receiving intensive care at a metro-area hospital; his prognosis is uncertain.

Because of his injuries, Richardson will be unable to resume his duties as dean for a significant period of time, according to a statement released by OHSU. During the interim, Dr. Joe Robertson, OHSU president and former School of Medicine dean, will serve as acting dean.

“Although this news is deeply upsetting to us all, we are proud of the OHSU community who quickly pulled together to support one another and continue the work at hand. The Richardson family is extremely grateful for the outpouring of support, but requests their privacy be respected at this difficult time,” the statement read.

He came to OHSU from Johns Hopkins University, where he was the Bordley Professor of Otolaryngology - Head and Neck Surgery. Prior to joining Johns Hopkins in 1995, he spent 15 years on the faculty at the University of Washington in Seattle. He was instrumental in OHSU's Department of Otolaryngology/Head and Neck Surgery placing in the top five in National Institutes of Health rankings of sponsored research. Departmental funding from the NIH tripled from 2001-2005.

Richardson has received several faculty teaching awards, including the “Driftwood Award” for best faculty teaching at the University of Washington and the “Faculty Teaching Award” from Johns Hopkins Department of Otolaryngology. He is also a recipient of the American Academy of Otolaryngology - Head and Neck Surgery’s “Honors Award” and the American Laryngological Association “Gabriel F. Tucker Award.”

Since his appointment as dean, he has guided the recruitment of key new faculty leaders to the school, as well as placed a priority on faculty stability and mission integration, as the school moves through an evolutionary period in response to the many changes now underway in academic medicine. In 2008, he oversaw the reorganization of the faculty clinical practices, with the integration of the OHSU Medical Group, a previously autonomous group, into the School of Medicine as the OHSU Faculty Practice Plan. Dr. Richardson has guided the establishment and growth of the Knight Cancer Institute, the Knight Cardiovascular Institute and the Bob and Charlee Moore Institute for Nutrition & Wellness, among other new entities in the school. Over the past several years, a focus on diversification of the research portfolio has yielded new funding sources and catalyzed dynamic new partnerships, such as with Intel and FEI. Recently, the school launched its new M.D. curriculum designed to prepare future physicians to lead and

thrive in the rapidly changing health care, discovery and technology landscape. Throughout this evolution, the medical school has remained steadfastly committed to the OHSU mission to improve the health and well-being of Oregonians, and to educate health care professionals for Oregon, including those who serve in rural and underserved areas.

Richardson earned his medical degree at the Medical University of South Carolina in Charleston and completed his surgical internship at the University of South Florida in Tampa. He completed his otolaryngology residency at the Medical University Hospital in Charleston, South Carolina, and a fellowship in pediatric otolaryngology at Children’s Hospital Medical Center in Cincinnati, Ohio, that included time in London, England, at The Hospital for Sick Children. Dr. Richardson earned the Master of Science in Business in 1998 and his Master of Business Administration in 2000, receiving both degrees from Johns Hopkins University.