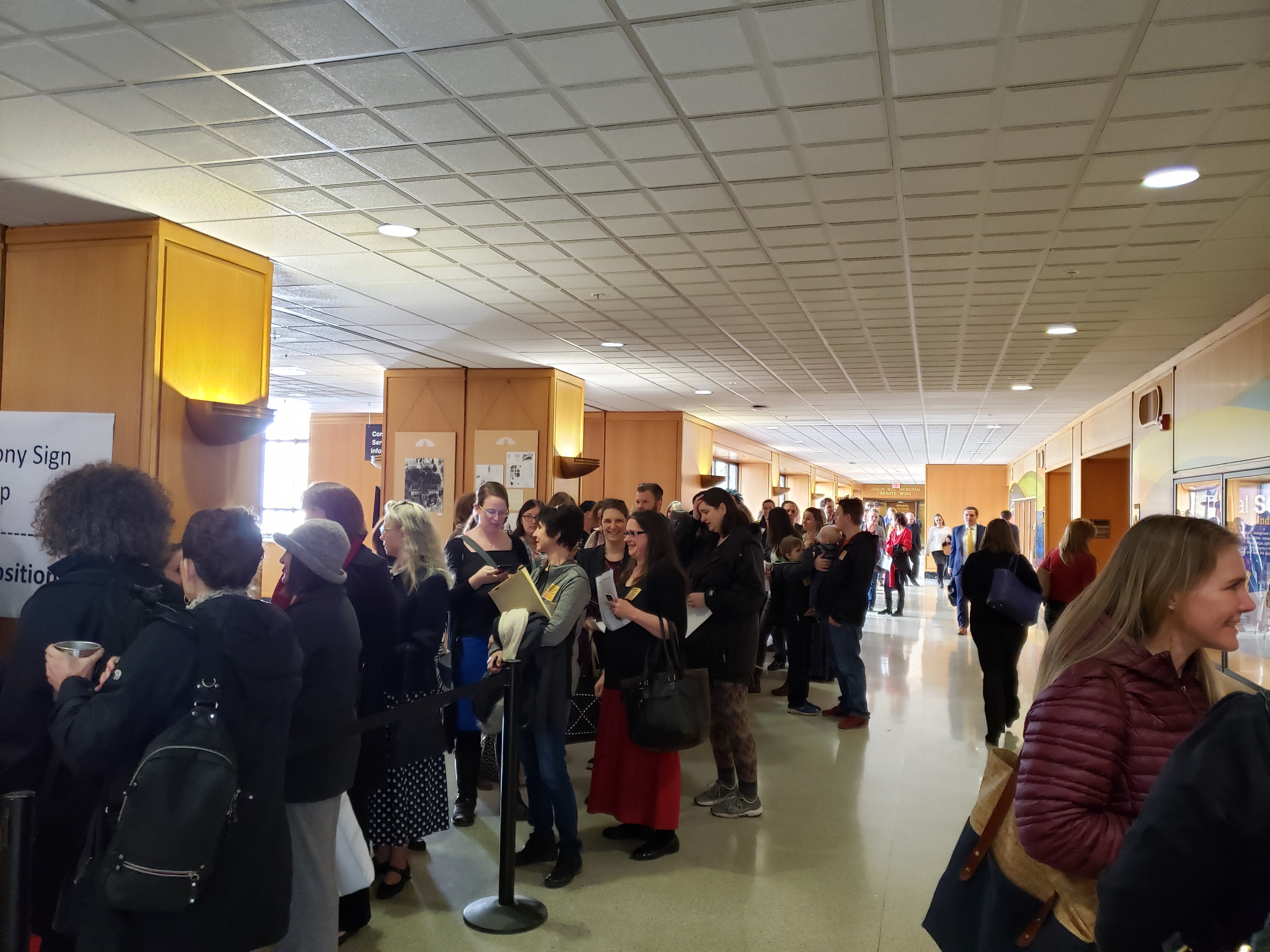 People flooded the Capitol building on Thursday over a plan to give Oregon among the tightest restrictions nationwide on exemptions to vaccines.

House Bill 3063, which got its first public hearing in the afternoon, would eliminate non-medical exemptions. It would not force parents to have their children vaccinated, but it would bar from class those without any of the required shots who didn’t have a medical exemption.

Hours before the hearing, opponents lined hallways outside the House health care committee room, waiting to sign up for testimony. When the doors opened, they jostled inside, trying to land a seat. More than 1,000 people submitted written testimony. With so much interest, lawmakers extended the hearing an hour past the usual 5:00 p.m. adjournment.

To ensure order, committee chair Andrea Salinas, D-Lake Oswego, said disruptions would not be tolerated and that any problematic individuals would be removed by police.

The proposal follows the ongoing Portland-area measles outbreak that has sickened at least 70 people, mostly in Clark County. According to health officials there, 57 involved unvaccinated children. In Multnomah County, four people have been infected. Health officials do not think a fifth case is part of the outbreak.

At the hearing, 75 people testified, including lawmakers, policy officials and vaccine opponents. Rep. Denyc Boles, R-Salem, who’s on the committee, said she’d never seen such an outpouring of opinion.

Only one Democratic lawmaker testified against the bill: Sen. Jeff Golden of Ashland. He said he understood the public health concerns behind it but said it would be too restrictive.

Sen. Dennis Linthicum, R-Klamath Falls, went even further. He said the bill “represents the worst in public policy.” Forcing parents to choose between their own freedom and their children’s education, he said, amounts to “Russian roulette” for the Legislature.

An opponent piled on, accusing legislators of betraying the public's trust. She likened vaccine mandates to acts of human experimentation carried out in Nazi Germany. She said that if lawmakers pass the bill, they will be “equally as guilty” as Adolf Hitler.

Jim Massey, a Portland naturopath, also spoke against the bill. He said his 25 years of treating patients has led him to doubt the safety and efficacy of vaccines. “Vaccines are unavoidably unsafe,” he explained in heated testimony.

Brittany Ruiz, an outspoken anti-vaccine advocate, also testified. Earlier she told The Lund Report the bill infringes on a parent’s right to freedom of choice and the ability to decide their children’s health care.

“At the end of the day, I just want to know what’s going into my body, and I have a right to say yes or no to that,” Ruiz said. “I think we should have transparency in government.”

Committee member Cedric Hayden, R-Roseburg, said he opposes the bill as written. Earlier, he told The Lund Report that he backs vaccines -- all five of his children are vaccinated -- but wants to allow for religious exemptions. He also does not want children to be barred from school.

In the hearing, he introduced an amendment to allow for religious exemptions, but Greenlick said he would not support it.

Jennifer Reich, a sociology professor at the University of Colorado, said state vaccine mandates were written in the 1960s and 1970s to protect children. She said because children are required to attend school and are placed in close quarters where the risk of infection is heightened, officials felt they had to protect them from preventable diseases like measles. Reich is the author of the 2016 book, “Calling the Shots: Why Parents Reject Vaccines.”

Greenlick, who’s known to lose patience with vaccine opponents, was composed in the hearing. He said the bill was not about “good guys and bad guys” but about protecting people. He said increased life expectancy in the United States stems in large part to vaccines, which were developed in the 20th Century. He said the measles outbreak in Clark County adds an urgency to the bill.

“It’s not a theoretical discussion anymore. It’s a very practical discussion,” he said. “We’re talking about a real example of what happens if no one vaccinates their kids.”

Director Pat Allen of the Oregon Health Authority said vaccines allow children to grow up and attend school without worry, something that was almost taken from him as a child when he caught the measles. He said vaccinations are not a choice for personal freedom, but for the betterment of society.

“My mom feared for my life,” he said. “We vaccinate not only as (an) individual choice but as a community.”

Multnomah County Commissioner Sharon Meieran, a practicing physician, said the most solemn oath she swore was to “do no harm,” and that the safety of vaccines has been comprehensively documented. Choking up during the hearing, Meieran said she was afraid to testify because of death threats that politicians have faced nationwide for similar positions.

“The tenor of this debate has gotten unhealthy, and frankly, dangerous,” Meieran said. “It’s more important than ever for elected officials to stand up for and stand by facts and science.”

Oregon is among 17 states nationwide that allow parents to opt out of immunizations for non-medical reasons.

The bill would give the state among the tightest vaccine regulations in the country. Only California, Mississippi and West Virginia require all children to be vaccinated unless they have a medical exemption.

Reich said Oregon will have to consider the lessons of its southern neighbor if HB 3063 passes.

Vaccination rates in California rose after the bill was passed but there’s also been an uptick in the number of medical exemptions, according to a study published in the journal Pediatrics. Before other exemptions were removed in 2015, 0.2 percent of California students had a medical exemption. By the 2017-18 school year, that number reached 0.7 percent. Increases were highest in counties that previously had the highest rates of personal-belief exemptions.

The United States has a strong process for monitoring vaccine safety, Reich said, but officials are not transparent about the process. She said the debate is not necessarily about preventable diseases themselves, but about bodily integrity. If parents better understood the process, Reich said, they would be more trusting.

The health care committee will schedule House Bill 3063 for a work session for a possible vote on sending it to the Joint Committee on Ways and Means.