In Columbia Gorge, A Small Hospital Turns To A Big System For Help 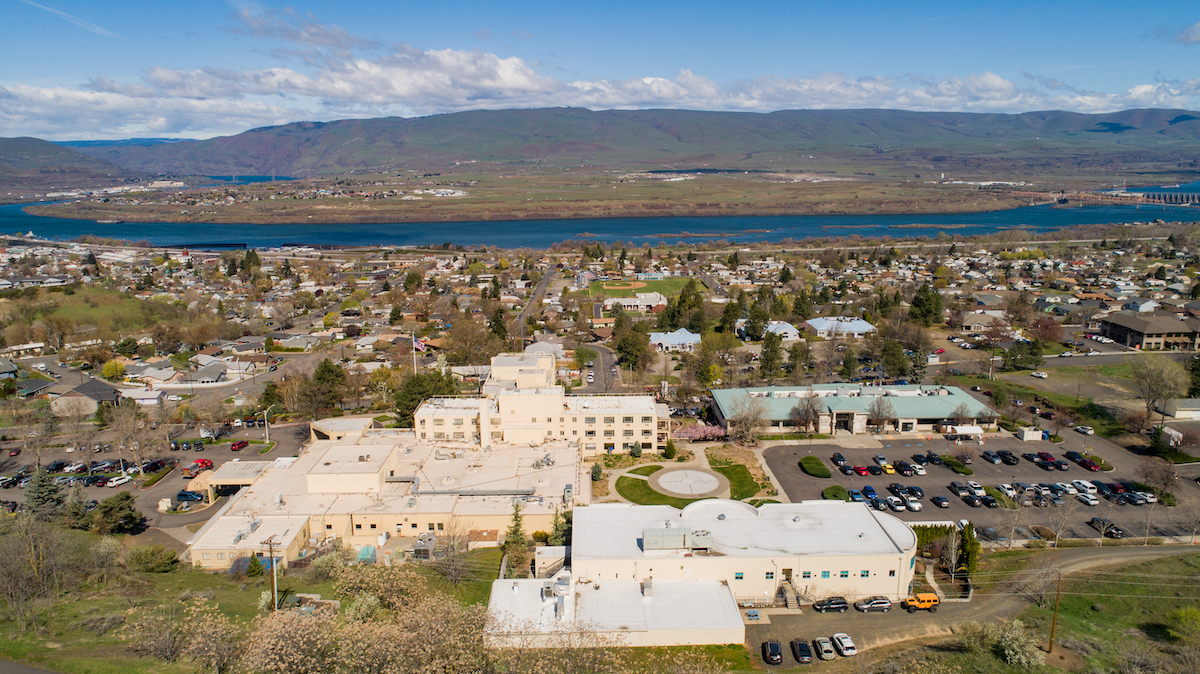 Mid-Columbia Medical Center in The Dalles is tentatively being absorbed by California-based Adventist Health./Photo by Larvick Media/Courtesy of MCMC

The past 10 years have been financially harsh for the small nonprofit Mid-Columbia Medical Center in The Dalles, one of a dwindling number of Oregon hospitals that are not part of a large system.

Since 2013, the independent 49-bed hospital on the Columbia River, 85 miles east of Portland, has hovered below financial breakeven point and the COVID-19 pandemic has been especially hard.

So it was no surprise when Mid-Columbia in August announced it was exploring being absorbed into a financially strong multi-state hospital system: The 23-hospital nonprofit Adventist Health system based in Roseville, California.

The potential deal is emblematic of the dilemma faced by many small, independent rural hospitals nationwide. Financially weak, they lack the ability on their own to borrow or otherwise raise money for major upgrades to serve patients and compete with better-funded facilities.

Critics, including many economists, say mergers and consolidation end up driving up health care costs that are passed on to patients, policyholders and the general public. But interviews and a review of records by The Lund Report show how, for a small facility in the Gorge, there isn’t much choice.

Mid-Columbia racked up operating losses totaling $20 million in seven of the last 10 years. That more than erased the $12.5 million in operating profits eked out in the other three years, the hospital’s annual filings with the state show.

With scant surplus cash, the hospital has been unable to build up a big investment portfolio, so it has largely missed out on the stock market boom of the past decade that has fueled a meteoric rise in the portfolios of so many large and wealthy hospitals systems.

And with much of its campus more than 60 years old, Mid-Columbia needs a major makeover. Last year, hospital officials declared they would like to build a new campus but were hazy on funding.

In the first quarter of 2022, it reported an operating loss of $4 million.

In Adventist, Mid-Columbia found an eager taker. With a $2 billion investment portfolio, Adventist is raring to grow. It says it wants to double in size by 2030, to $10 billion in annual revenues, and become a streamlined West Coast powerhouse that achieves close to 10% annual profit margins. It already owns two other hospitals in Oregon: the 302-bed Adventist in Portland, the 25-bed Tillamook hospital.

Key to the tentative Adventist/Mid-Columbia agreement is Adventist’s promise to pump at least $100 million into the facility in The Dalles.

The $100 million would be for “investments in physician and (advanced practitioner) recruitment, service line development and healthcare campus improvements,” Mid-Columbia CEO Dennis Knox said in a statement to The Lund Report.

Some Wasco County residents hope that means at the very least a revamp of the facility, originally built 64 years ago and now standing at 117,000 square feet after additions and remodels.

“We need a new hospital, or a renovated hospital for sure,” said Wasco County Commissioner Kathy Schwartz, a retired registered nurse who worked for years in Mid-Columbia’s emergency department. “The hospital definitely needs to come into the 21st century.”  As an example, she said, many of the hospital’s patient rooms are configured for two patients — an old-school approach.

Rebecca Routson, a registered nurse at Mid-Columbia and a leader for the Oregon Nurses Association union there, hopes an affiliation with Adventist will reduce the turnover of physicians and other workers. After a physician staffing agreement between Mid-Columbia and Oregon Health & Science University in Portland fell apart last year, “we have all been feeling like we are treading water,” Routson said. “We’re glad there is a boat on the horizon, and we’re hoping that there is a rescue ahead.” The nurses’ union represents 150 nurses at the hospital.

Knox conceded times have been trying for Mid-Columbia. “Today’s healthcare industry is continually being challenged, with rural community hospitals like ours facing the strongest headwinds,” he said in a statement to The Lund Report.

But Mid-Columbia and Adventist officials declined to answer detailed questions about finances or the structure of the potential linkup. They said they are working on the deal and must apply for Oregon Health Authority approval under the state’s new mergers and acquisitions review program. It would be the first hospital deal to go in for state review. The state program seeks to ensure deals don’t cut services, such as for women’s reproductive health, or drive up costs.

“While many details of the agreement are still being worked out, Adventist Health has committed to maintaining or expanding access to women’s health and reproductive health services. No access to these services would be cut as part of this agreement,” De Oliveira told The Lund Report.

Among Oregon’s 60 general hospitals, fewer than a dozen are independent standalone operations, mostly small rural facilities on the Oregon Coast or in the eastern part of the state.

Merging into a big system is one way rural hospitals can avoid outright closure, the Association of American Hospitals said in a report this month (September) on rural hospitals. Mergers or similar affiliations “are important lifelines for rural hospitals, increasing access to much-needed capital,” the report said. From 2010 to 2021, across the country 136 rural hospitals closed, driven by staff shortages, revenue shortfalls, and unprofitable patient demographics, including high levels of Medicaid or uninsured patients, the report said.

Hospital mergers or sales are a rarity in Oregon. One of the most recent was the sale of the financially ailing nonprofit McKenzie-Willamette Hospital in Springfield to for-profit Triad Corp. in 2003. Later, for-profit Quorum Hospital Corp. took ownership and turned it into one of the state’s most profitable hospitals. In 1998, the independent nonprofit Cottage Grove Community Hospital in Lane County closed for lack of funds. A replacement hospital was built by the nonprofit PeaceHealth system in 2003 and now operates mostly at financial breakeven.

For Adventist, absorbing Mid-Columbia is a way to expand in Oregon. All of Adventist’s current operations are in California, with the exception of one hospital in Hawaii and the two in Oregon.

Adventist‘s mission derives from the Adventist Protestant Christian faith. The system started in Los Angeles in 1913.

In recent years, after deciding to become a major regional player to achieve efficiency and improve patient care, Adventist cast about for partners, acquisitions or other ways to grow. But those efforts had mixed success, and it has suffered financial hits from forest fires and the pandemic.

Adventist’s most prominent growth effort took place in 2018, when it proposed a joint operating plan with Providence St. Joseph Health, the massive nonprofit Renton, Wash.-based system that owns the Providence hospitals in Oregon. Under the deal, Adventist and St. Joseph hospitals in parts of California would be run by a joint operating company. The hospital systems said that would improve efficiency and care. But the California Department of Justice rejected the plan, saying it had the potential to drive up costs and limit access.

Prior to the pandemic, Adventist typically was profitable, and bond ratings agencies have given it favorable reviews.

Adventist has “solid positions in multiple markets, all of which exhibit strong population growth,” said the ratings agency Fitch in a September 2021 report. Adventist’s flagships include large hospitals in Los Angeles, Glendale and Sonora as well as Portland. Plus, it has a network of 370 clinics.

From 2016-18, the system had annual profit levels close to 10%, but in 2019 the Camp Fire in California largely destroyed the system’s 101-bed Feather River Hospital, cutting into revenues, the Fitch report noted. The hospital remains closed.

And like other hospital systems, Adventist has been buffeted by COVID-19, especially as federal aid has petered out.

For the first six months of this year, Adventist reported an operating loss of $209 million on revenues of $2.3 billion.

The system’s $2 billion investment portfolio generated gains that offset much of those losses, however.

The system’s net assets — total assets such as facilities and the investment portfolio, minus debt and other liabilities — stands at $2.6 billion.

Fitch, in a September 2021 report, said it expects Adventist to return to solid profitability by 2023.

A Falling-Out With OHSU

Mid-Columbia, meanwhile, has faced challenges in keeping its footing.

For a decade it had a partnership with Oregon Health & Science University under which many doctors who were employed by OHSU worked at Mid-Columbia. That agreement dissolved in acrimony in late 2021, with each side faulting the other, according to local news reports. At the same time, Mid-Columbia in the fall of 2021 developed a staffing partnership with the Adventist Portland hospital.

The Dalles City Council member Timothy McGlothlin said the departure of doctors with the ending of the OHSU relationship has worried residents and he’s eager to see details of how joining with Adventist could improve staff recruiting and retention.

And while Wasco county, with a population of 26,000, is growing, it hasn’t experienced the population boom — and increase in patient volumes — of communities closer to Portland.

Commissioner Schwartz said she wants to learn more about the potential funding infusion for the hospital.

“Obviously we need that institution to be viable financially and profitable in order for it to continue,” she said.

Adventist Health made a deal with the local hospital where I live in Tehachapi, California.  Our small local hospital (about 25 beds) was built over 70 years ago and could not meet California's requirements for earthquake proofing of hospitals.  Adventist made a deal to provide approximately $90 million to help build a new hospital which is also financed with local voter approved bond debt and to operate the facility for next 30 years. We have a very nice new, modern hospital and some added facilities.  For local residents the additional services (such as imaging) have reduced the need to travel about 40 miles to Bakersfield or Lancaster which was the case for many years.  The new hospital has attracted other new investment in our community - a new large hotel/motel joins one already present - both are adjacent to the hospital.  Now a new Starbucks and other retail are being developed adjacent to the hospital as well.  The additional traffic has boosted use of the adjacent Denny's and gas station.  It is anticipated that more local health businesses will locate near the hospital since it is located near considerable vacant, developable land.

But there is a downside...the fees charged by Adventist at the new hospital and for a local physician practice group that bought out my retiring physician two years ago are clearly higher than what was charged before Adventist arrived.

While this was happening Adventist also took over management of other hospitals around the state in small and medium sized communities such as Delano which is north of Bakersfield.

Based on what is happening here, Adventist may be the best and perhaps only hope for Mid Columbia.

P.S.  You did not mention Adventist Milwaukie in Oregon - my late mother was in that hospital more than once before her passing a year ago.