In Abortion Access Fight, Oregon’s Merger Law Is A Tool Unlike Any Other 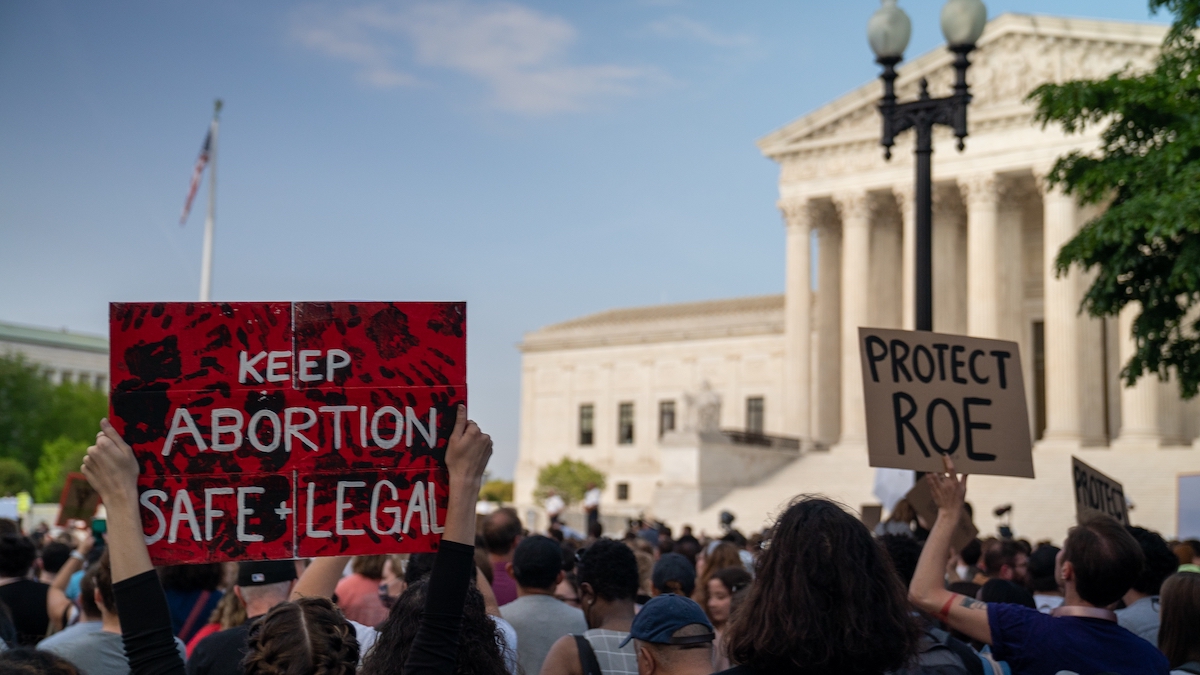 Protesters gather at the U.S. Supreme Court on May 3, 2022, after a report that the court will overturn Roe v. Wade, ending the constitutional right to abortion./Shutterstock

(This article has been updated to incorporate additional reporting.)

When it comes to the nationwide abortion access struggle triggered last week by the U.S. Supreme Court, Oregon has a potent tool found nowhere else.

Significantly, that power is intended to, among other things, protect access to abortion and other reproductive health services such as by restricting expansions of religious-based providers. And now, in the wake of the Supreme Court ruling striking down Roe v. Wade, lawmakers in Washington state are renewing their efforts to follow Oregon’s lead and pass a similar law. Washington state Sen. Manka Dhingra recently told Axios there’s “definitely a path forward” to doing so.

In Oregon, Rep. Andrea Salinas, D-Lake Oswego, who last year sponsored the merger law, House Bill 2362, told The Lund Report that the Oregon law is even more important now that the Supreme Court ruling’s has spawned a state-by-state fight over abortion rights and access.

Similar to some other states, Oregon also has the Reproductive Health Equity Act of 2017. It protects the right to abortion and seeks to ensure abortion, family planning and postpartum care available to all Oregonians.

But, Salinas said, just because something is a right doesn’t mean providers have to provide it. That’s what Oregon’s merger law tried to address.

It requires the state to consider whether services would be reduced when deciding whether or not to approve a merger, acquisition or consolidation among health care providers, Salinas explained.

In Washington, Gov. Jay Inslee made a similar point to Axios. “It doesn’t do you a lot of good if you have the legal protection — if you are safe from the Republican Party and the Supreme Court — but there’s no one to provide the service,” he said.

An Do, executive director of Planned Parenthood Advocates of Oregon, told The Lund Report in an email that the law has gained in importance. “In the wake of this Supreme Court decision, with millions of people now being forced to travel hundreds if not thousands of miles to access abortion, preventing the loss of essential health services during a merger is more critical than ever before.”

Similarly, Felisa Hagins, the political director of Service Employees International Union Local 49 told The Lund Report in an email that the law's requirement for any major transaction of “review of essential services will be critical in protecting the rights of Oregonians and we were proud to be part of this forward-looking legislation.”

The debate over the merger bill in the Oregon Legislature referenced complex arguments over market power, the effects of mergers on costs, and whether the new law would hurt collaboration or threaten rural hospitals’ survival.

However, it was not a secret that the bill was intended, in part, to combat the steady expansion of Catholic health systems, which do not provide abortions or referrals to abortion providers. Advocates for reproductive and gender-affirming health services have long considered these health systems a major threat.

SEIU, in testimony supporting the bill, cited a Health Affairs article finding. As of 2018, Providence Health & Services — the largest Catholic system in Oregon — employed “the largest share of physicians in Portland (28.7%) and nearly tripled its market share over (a) two-year period.”

A report issued by the group Community Catalyst in 2020 found that 30% of hospital acute care beds in Oregon were in Catholic facilities.

In contrast, one study years ago indicated that just 14% of Oregonians identify as Catholic.

Under Oregon’s merger law, before Providence can acquire major additional providers, the state must review whether the transaction would reduce access to health care services. That would include abortion and gender affirming services.

Providence, which aggressively opposed the bill, denied some of the criticisms made about its services, but did concede that  “some services are not provided in accordance with the Ethical and Religious Directives for Catholic Health Care Services.”

In addition to Planned Parenthood, the groups NARAL Pro-Choice Oregon and Compassion and Choices Action Network supported the bill, as did Basic Rights Oregon and others.

At the time, sources said that inside the Democratic caucus, the argument over the bill often boiled down to a simple argument that support for it amounted to a pro-choice vote.

“Yes, absolutely,” Salinas said regarding the internal debate. But she said support for the bill was about much more than abortion.

“Not only do we not have enough access to abortion care, but just basic reproductive health care, preventative care service in Oregon,” she said.

Salinas said she’d heard from fellow lawmakers that some Oregonians had to drive two hours to get their annual pap smear screen for cervical cancer.

“That seems pretty extreme to go get your annual visit,” she said.

Correction: An earlier version of this article cited an inaccurate figure concerning the portion of Oregon acute care beds in Catholic hospitals. The Lund Report regrets the error.

Jun 28 2022
News source:
The Lund Report
Keywords:
abortion
×
This article is for premium subscribers. If you are one, please sign in below.
You can see two more premium stories for free. To subscribe, click here. We depend on premium subscriptions to survive, and they are tax deductible.
Sign InGo Premium Not now