Counselors, case managers and others at one of Oregon’s largest non-profit mental health providers are the latest in the sector to vote to join a union.
By:
Jessica Floum Workers at one of Oregon’s largest non-profit behavioral health providers are unionizing after complaining for years of being overworked and underpaid.

The union will help employees combat low wages and high attrition rates, said Ross Grami, communications director for the American Federation of State, County and Municipal Employees, or AFSCME, the group working with Cascadia workers to unionize. Employees also want to have more say on how they care for clients, he said.

“We have a lot of caregivers who feel like (they) can barely care for (themselves) and yet (they) are expected to provide quality care,” Grami said.

Cascadia employees are not the first mental health workers to unionize. Volunteers of America Oregon contracted with AFSCME earlier this year. Staff at Outside In were in negotiations with management as of August.

Cascadia spokeswoman Jennifer Moffatt told The Lund Report in an email that “Cascadia respects the right of our employees and their ability to explore their options and make decisions.” She declined to comment further.

The unionization is at least eight years in the making, Grami said. Cascadia employees tried and failed to form a union in 2008. Conversations about unionizing were quashed in 2016 and 2017 after Cascadia sent two anti-union letters.

“This time you have workers that are really motivated and who have seen there needs to be changes to Cascadia,” Grami said.

Grami said Cascadia has engaged in a “long history” of anti-union behavior that made it hard for past efforts to get off the ground.

He alleged the non-profit hired an anti-union consultant to talk to employees one-on-one, held group meetings where they told people to vote “no” and even fired an employee in retaliation for union-related activities. 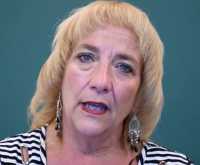 Daneen Pray/Facebook
That person, Daneen Pray, worked as a Cascadia office billing coordinator for almost 17 years. Cascadia fired her Sept. 17 after she communicated with a union organizer, Pray said in a Facebook video posted by AFSCME’s Oregon chapter.

The video says that Cascadia’s human resources department called Pray into a meeting several days earlier and showed her pictures of a text conversation between her and a union organizer.

Pray said those pictures could have only been taken if the company was surveilling her.

“I gave everything,” Pray said in the video. “ Cascadia should really realize all the good people that have (come) and gone. They could retain all those people if they could just work with us and work together.”

AFSCME filed a complaint with the National Labor Relations Board on Pray’s behalf. Grami said the organization intends to press charges.

Moffatt did not respond to requests for comment about Pray’s allegations.

Cascadia is one of the largest providers of mental health care for Medicaid patients in Oregon, with 900 employees and 75 locations in the state.

The nonprofit tried to deter its employees from forming a union in an August 14 letter warning them of union disadvantages, including dues, initiation fees, potential fines and assessments, work disruptions and a “divisive culture.”

Oct 17 2018
Keywords:
mental health, other, Cascadia Behavioral Healthcare, afscme
×
This article is for premium subscribers. If you are one, please sign in below.
You can see two more premium stories for free. To subscribe, click here. We depend on premium subscriptions to survive, and they are tax deductible.
Sign InGo Premium Not now