The latest campaign appears to be at Cascadia Behavioral Healthcare, one of the largest providers of mental health services to Medicaid clients in Oregon.
By:
Michael Kohn

AFSCME protest at Volunteers of America.jpg 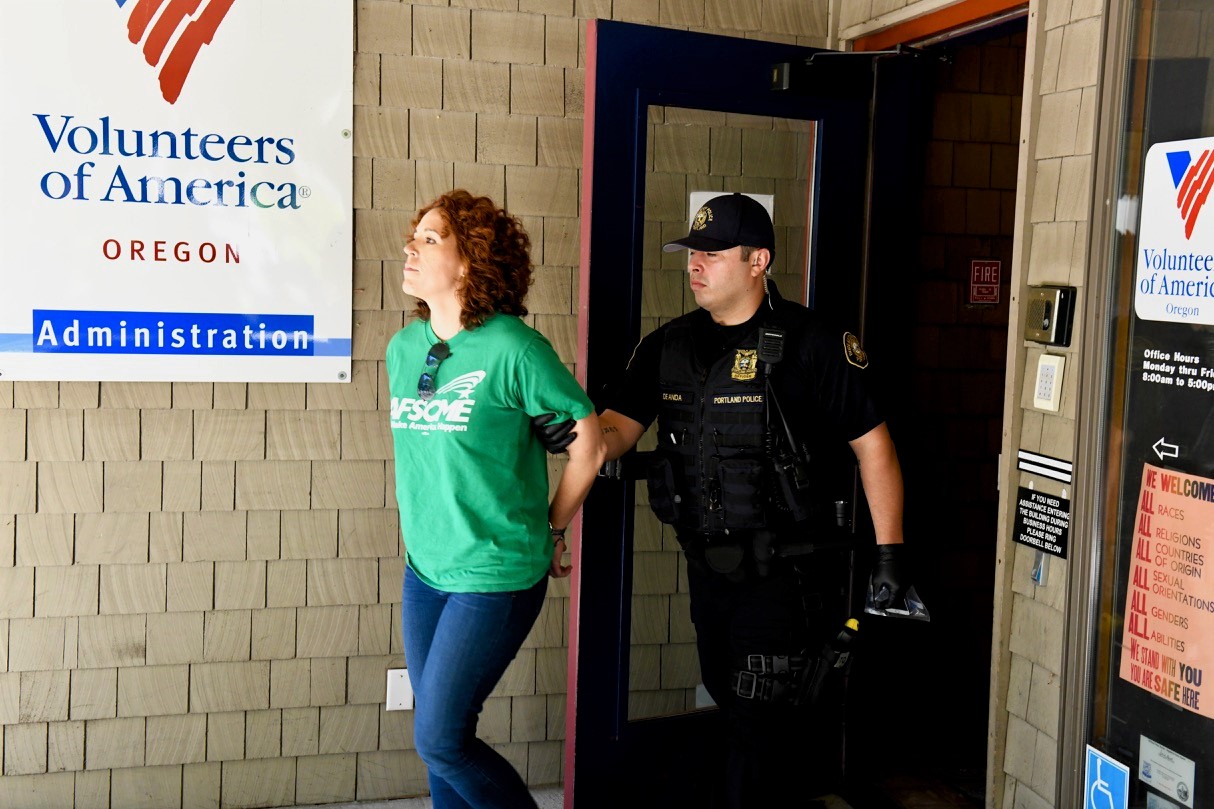 An AFSCME protest at Volunteers of America led to 10 arrests. But mental health workers did end up unionizing./Courtesy of AFSCME

A vote among Cascadia employees to unionize is expected “within a couple of months,” according to an employee who spoke with The Lund Report on the condition of anonymity. The employee said  “a critical mass” of staff are on board to vote in favor of unionizing. Other sources confirmed that a campaign is underway.

“Cascadia does not believe a union can additionally benefit our employees,” according to an August 14 “union-busting” letter sent to employees and obtained by the Lund Report. The letter warned employees about union disadvantages, such as union dues, initiation fees, the possibility of fines and assessments, work disruptions and a “divisive culture.”

A successful campaign at Cascadia would mark a major achievement for labor: The nonprofit, with 900 employees and 75 locations in the state, is one of the largest providers of mental health care for Medicaid clients in Oregon. It also follows a trend among workers who for years have long complained of being overworked and underpaid.

Behavioral health workers at Volunteers of America Oregon signed a contract with the American Federation of State, County and Municipal Employees, or AFSCME, earlier this year, and mental health care staff at Outside In are currently in negotiations with management. Both nonprofits, which provide social and medical services to vulnerable people, are based in Portland.

The push to unionize pits workers, who seek higher wages and more benefits, against employers who warn that unionization can lead to strikes and higher costs of care. Those in favor of unions argue that unionization lowers staff turnover and thereby helps ensure continuity of care because patients can stay with the same clinician.

A common complaint among mental health care workers is the increasing number of caseloads, with many blaming the Affordable Care Act.

“This still means that many professionals are overworked -- facing caseloads of over 100 patients -- or that patients with private coverage are forced to go out-of-network to find a provider,” Griffith said.

For the patient, Griffith warns that the spread of unionization, reduced workloads and higher wages could represent higher costs and longer waits for an appointment. While premiums could rise, it is difficult to estimate how significant the increase might be, Griffith said.

At Cascadia, mental health workers have repeatedly tried to unionize. They attempted to form a union in 2008 but did not succeed, according to AFSCME, the largest trade union of public employees in the United States. And in 2016 and 2017, Cascadia issued two anti-union letters in response to employee conversations about organizing.

Cascadia workers are following the lead of other mental health care professionals in Oregon who have sat at the bargaining table with their bosses to resolve long-standing complaints over poor salaries, weak benefits and heavy caseloads.

Volunteers of America Oregon staff settled with management in June after 18 months of negotiations.

In the final stage of that campaign, activists staged a sit-in Volunteers of America headquarters in Portland. Police ended up arresting 10 activists, who were convicted of trespassing and sentenced to community service.

“I think that the sit-in said a lot to the (Volunteers of America) management that this fight wasn’t going away, and ultimately they settled,” Ross Grami, communications director for AFSCME, said in a phone interview.

Outside In, an organization that mainly helps homeless and marginalized youth, also saw its workers vote for union contract with Oregon AFSCME. The vote, which occured in May, affected 128 employees at the Portland-based non-profit. Negotiations for better wages and improved working conditions are still in progress.

“What you are seeing is a pretty highly educated workforce starting to realize how underpaid they are in the system and how broken the system is and that their best way to fix the systemic issues and raise their standards is through unionization,” Grami said. “We are seeing more and more of that.”

Higher pay and reduced workloads among health care professionals can ultimately lead to better care for patients, according to Vialante Vieira, a drug-free rehousing manager at Volunteers of America. When employees feel like they have a voice and are respected by management,  their morale improves and leads to a better working atmosphere, she added.

Kay Toran, president and CEO of Volunteers of America Oregon, did not respond to a request for comment.

Employee satisfaction can also reduce staff turnover, a common complaint by employees at organizations including Cascadia, Volunteers of America and Outside In. Due to high rates of staff turnover, it’s not uncommon for mental health patients who rely on Medicaid to be passed through three or four clinicians a year, a situation that can exacerbate trauma. Reducing staff turnover can also lower administrative costs.

“The attrition rate is so bad at some of these institutions that they are essentially rehiring a large swath of the workforce every year,” Grami said. “That is expensive in terms of training and recruitment.”

However, unionization also has the potential to drive costs up for insurance carriers, costs that may be passed on to consumers. Another potential downside for patients is a workers’ strike, although Grami considers the possibility of a strike in behavioral health to be lower compared with other professions.

While increased wages and costs appear to be key factors in the decision to unionize, Griffith of OSPRIG, said the issue cannot be looked at solely from a cost perspective.

“What's most important is whether patients are receiving value for the care they pay for,” Griffith said in an email. “If behavioral health professionals are overworked, or if the wages and benefits offered are too low to attract quality mental health professionals, the value of care will suffer.”

Aug 27 2018
Keywords:
Cascadia Behavioral Healthcare, unionization, labor, union, other, mental health
×
This article is for premium subscribers. If you are one, please sign in below.
You can see two more premium stories for free. To subscribe, click here. We depend on premium subscriptions to survive, and they are tax deductible.
Sign InGo Premium Not now