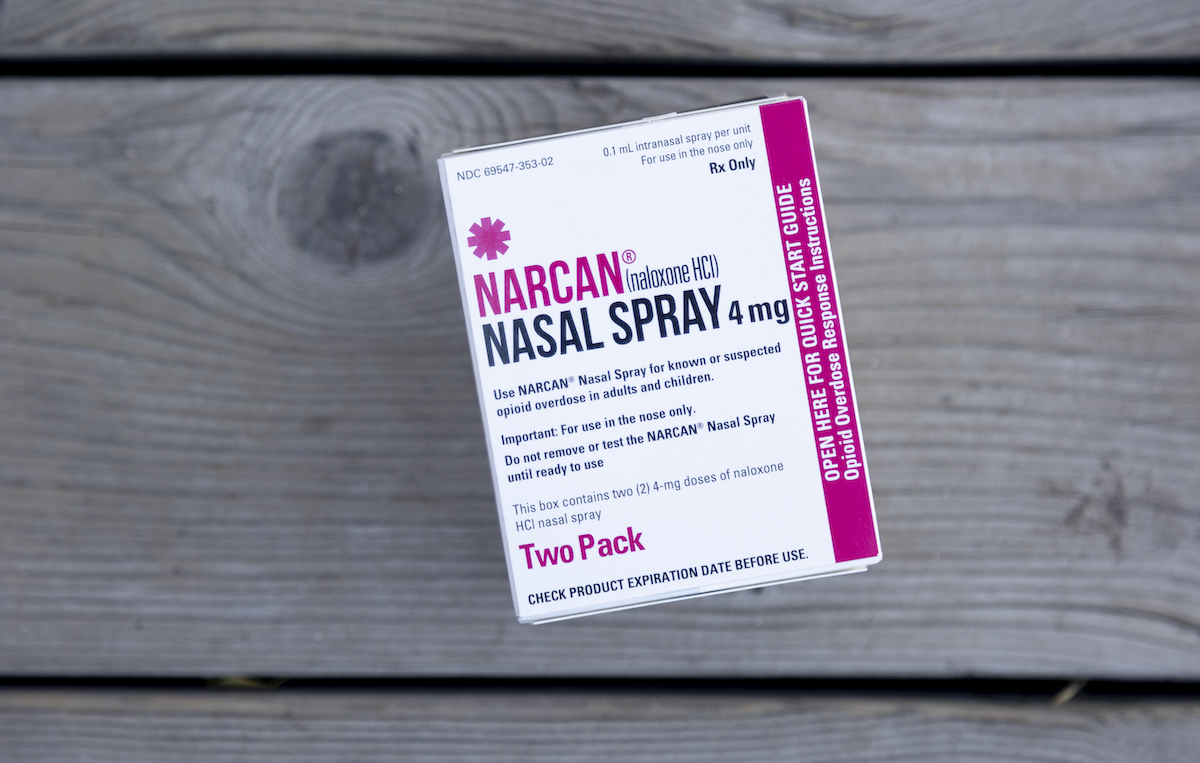 A box of Narcan, an-opioid reversing drug, before it was distributed at a day shelter in Ontario, Ore. on Oct. 13, 2022.
Kyle Green/The Lund Report

State Rep. Maxine Dexter, D-Portland, said that while working as a critical care doctor she’s given the order thousands of times for naloxone to be administered to unresponsive patients.

Naloxone is used to reverse opioid overdoses. As overdoses surge in Oregon, Dexter told The Lund Report she envisions a world where the life-saving medication is so common it can be picked up from baskets in public bathrooms or acquired from vending machines at police stations, hospitals or clinics.

In 2021, 745 Oregonians died from unintentional opioid overdoses, according to Oregon Health Authority numbers. That’s up from 472 in 2020 and 280 in 2019. Dexter said the nonfatal overdoses take a toll, too, potentially causing permanent brain injury, and she wants to put the brakes on rising overdoses.

“We just need to very broadly and very quickly improve communities’ access” to naloxone, she said.

Dexter has introduced a package of bills designed to reduce legal hurdles preventing naloxone from getting into the hands of people likely to need it. Other bills Dexter introduced are aimed at making drug use less harmful and standardizing the varying ways overdose data is currently collected.

Naloxone is sold in its generic form, which is stored in a vial and injected with a needle, and also as Narcan, a more costly patented nasal spray. Dexter’s bills follow efforts by public health officials, both locally and nationally, to make the medication more available as fentanyl, a potent synthetic opioid, spreads.

Dexter said she’s seeing a “skyrocketing” problem of too many people with substance abuse disorder being unable to access treatment and described her bills as a “stopgap” that she said will save lives.

‘Get More Narcan out on the streets’

Naloxone can be purchased from a pharmacist without a prescription. But in Oregon naloxone is kept behind the counter and must be requested, unlike other medications that can be purchased off the shelves in a drug store. And there are restrictions on who can distribute it. Dexter said she wants to loosen those restrictions and allow police officers, firefighters and others to distribute naloxone kits.

“Most people use opioids in the presence of other people,” said Dexter. “And so if somebody overdoses, having someone present who has naloxone will save lives.”

Oregon has a Good Samaritan law offering protections for people that give naloxone to someone to reverse an opioid. One of Dexter’s bills, House Bill 2883, clarifies that teachers, school administrators and other employees can give naloxone to a student without written permission from their parents.

Another bill, House Bill 2885, allows the owner of a building open to the public, such as a bar or library, to have naloxone kits on hand. It also directs the Oregon Health Authority to authorize the distribution of naloxone and set up a process for building owners to obtain kits at potentially discounted prices.

Haven Wheelock, who oversees the drug users health service program at Outside In, a Portland-based nonprofit that provides health and social services to homeless youth, told The Lund Report the bill will create a clear pathway for businesses and others to access naloxone and have it on hand much like a fire extinguisher.

“People think about naloxone as being a free resource, and it’s not,” said Wheelock.

Narcan nasal spray is considered easier to use; generic naloxone costs less but must be injected. But Wheelock said Narcan costs around $150 for two doses, and the state buying it in bulk will bring down the price.

Emergency first responders frequently use naloxone while out of calls. House Bill 2887 would allow law enforcement officers, emergency medical service workers and firefighters to distribute naloxone kits to individuals at risk or overdosing, their families and anyone who requests them.

“We’re 100% in agreement that we need to get more Narcan out on the streets,” Karl Koenig — president of the Oregon State Fire Fighters Council, which represents about 3,600 firefighters and paramedics — told The Lund Report.

Koenig said that while firefighters and paramedics have been equipped with naloxone for decades, there is currently no protocol for them to distribute the medication to the public.

The bill, if passed, would get more naloxone, said Koenig. But he added that there are some logistical considerations to work out, such as how to give out the kits when fire stations are often empty because crews are out on calls. He also questioned if fire engines and ambulances are equipped to distribute the kits.

A handful of states have already decriminalized fentanyl testing strips in response to reports of the drug being mixed into cocaine, methamphetamine and counterfeit opioid medications.

The proliferation of fentanyl and other powerful synthetic opioids prompted the U.S. Surgeon General’s Office to issue an advisory in April 2022 calling to increase the availability of naloxone. Fentanyl and other similar drugs caused the number of overdose deaths from prescription and illicit opioids to double nationally from 21,089 in 2010 to 42,249 in 2016, according to the office.

In 2021 in Oregon, roughly 400 deaths from fentanyl and other synthetic opioids — excluding heroin and other drugs — were recorded, an 83% increase from 2020, according to Oregon Health Authority numbers.

Wheelock said that sometimes heroin is mixed with fentanyl. Cocaine can also be contaminated by fentanyl (also a white powder) if a scale used to measure the drugs isn’t properly cleaned, she said.

Fentanyl testing strips can alert drug users to the presence of the potentially deadly opioid in cocaine or heroin. But Wheelock said there are legal barriers to handing out the strips — Oregon law still considers them prohibited drug paraphernalia.

“I think we should just get rid of (Oregon’s) drug paraphernalia law entirely.”

The bill would legalize distributing pipes as a harm-reduction item. Wheelock said smoking drugs is safer than injecting them because users aren’t at risk of contracting HIV or Hepatitis and have better control over how much they’re intaking.

“If you do a shot of alcohol, you can’t stop halfway through,” said Wheelock. “But if you're halfway through a beer and are like, ‘I don't actually need any more of this,’ you can stop.”

Other bills introduced by Dexter would direct the Oregon Health Authority to launch a public education campaign on illicit opioids and to study ways to prevent people from overdosing on them. Another would change language in state statute to ensure that state law covers any new medications that reverse opioid overdoses.

Jan 17 2023
News source:
The Lund Report
Keywords:
behavioral health
×
This article is for premium subscribers. If you are one, please sign in below.
You can see two more premium stories for free. To subscribe, click here. We depend on premium subscriptions to survive, and they are tax deductible.
Sign InGo Premium Not now