Led by Health Care for All, advocates are demanding to know how much Providence Health & Services paid for the naming rights and believe those dollars should have gone toward patient care.
By:
Diane Lund-Muzikant 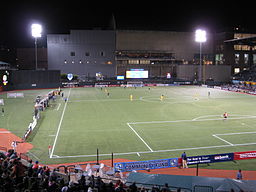 After being ignored when they requested a meeting with Mayor Charlie Hales, a group of volunteers intends to appear before the Portland City Council May 28, and want to know how much Providence Health & Services paid for the naming rights of the Portland Timbers stadium now called Providence Park.

Earlier this month, they rallied in front of City Hall asking for a meeting with the mayor. But their demands were ignored.

“We went through all the hoops but no one ever called us back,” said Lisa Stiller with Health Care for All. “Who’s benefiting from these dollars, and why are they hiding this amount? Providence claims to be a Catholic hospital, and caring for the poor is part of their mission statement.”

Stiller remains convinced city officials know the amount Providence paid for those naming rights, after seeing a copy of that contract, with that monetary figure redacted in the 15-year, 40-page naming rights and sponsorship agreement.

“We’re determined to find out how much Providence paid,” said Stiller who believes those dollars should have gone toward patient care rather than advertising.

The organization she represents, Health Care for All, believes in a single-payer publicly funded health system that would provide universal coverage and not people to pay anything for healthcare, but give them the right to choose their own doctor.

“Until we get such a system that most industrial democracies have, we’re going to keep pushing because it’s the right thing to do,” said Stiller. Between 90,000 and 110,000 Oregonians still fall through the cracks, she added, even with the Affordable Care Act because they earn too much to qualify for Medicaid and cannot afford the monthly insurance premiums.

In an earlier article, the mayor’s communications director, Dana Haynes, told the group that the mayor “does triage every week” to manage requests for his time and his attention that day was focused on the budget, urban renewal and Google.

Another advocate, Peter Apanel, has filed a criminal complaint with the Multnomah County District Attorney’s office in connection with the Providence Park naming rights agreement. In an email response, he told The Lund Report that the DA’s office is still deciding what to do, and urged HCAO members to voice their concerns and push for immediate action. .

“My criminal complaint is based on the fact that the lease between the Portland Timbers and the City of Portland requires that the price information for all stadium-related naming rights agreements shall be submitted to the City, for the city's review and records,” he wrote.

In an earlier letter distributed at the rally, Apanel wrote, “The Portland Timbers and the city of Portland are in violation of Portland City Ordinance No. 183516 because they have failed to disclose to the public the price being paid by Providence Health Services for stadium naming rights. And it falls within the jurisdiction of the Multnomah County District Attorney to prosecute any violations of city ordinances,” the letter states.

“Since 2011, the Timbers have failed to submit to the city the price information for any stadium-related naming rights agreement, and the city has failed to enforce the disclosure requirements in the lease,” the letter goes on to say.

When asked about this criminal complaint filed by Apanel, Stiller said he was not associated with her organization.

Also, in a follow-up response to Apanel, Travis Sewell, Multnomah County senior deputy district attorney, told The Lund Report in an email, “We are looking into this matter and will let you, and Mr. Apanel, know what our decision is regarding his complaint.”

Providence did not mention the new stadium name in its description of a long list of soccer-related and other community enterprises. “Providence Health & Services is honored to expand its community partnership with the Portland Timbers and Portland Thorns FC, as we work together to foster community, health and wellness across the region,” according to a statement sent to The Lund Report.

The image in this story is by Chris Yunker (Flickr) [CC-BY-SA-2.0 (http://creativecommons.org/licenses/by-sa/2.0)], via Wikimedia Commons.