HealthShare Been Critical About Length of Stays at its Newly Opened Emotional Wellness Center.
By:
Thacher Schmid 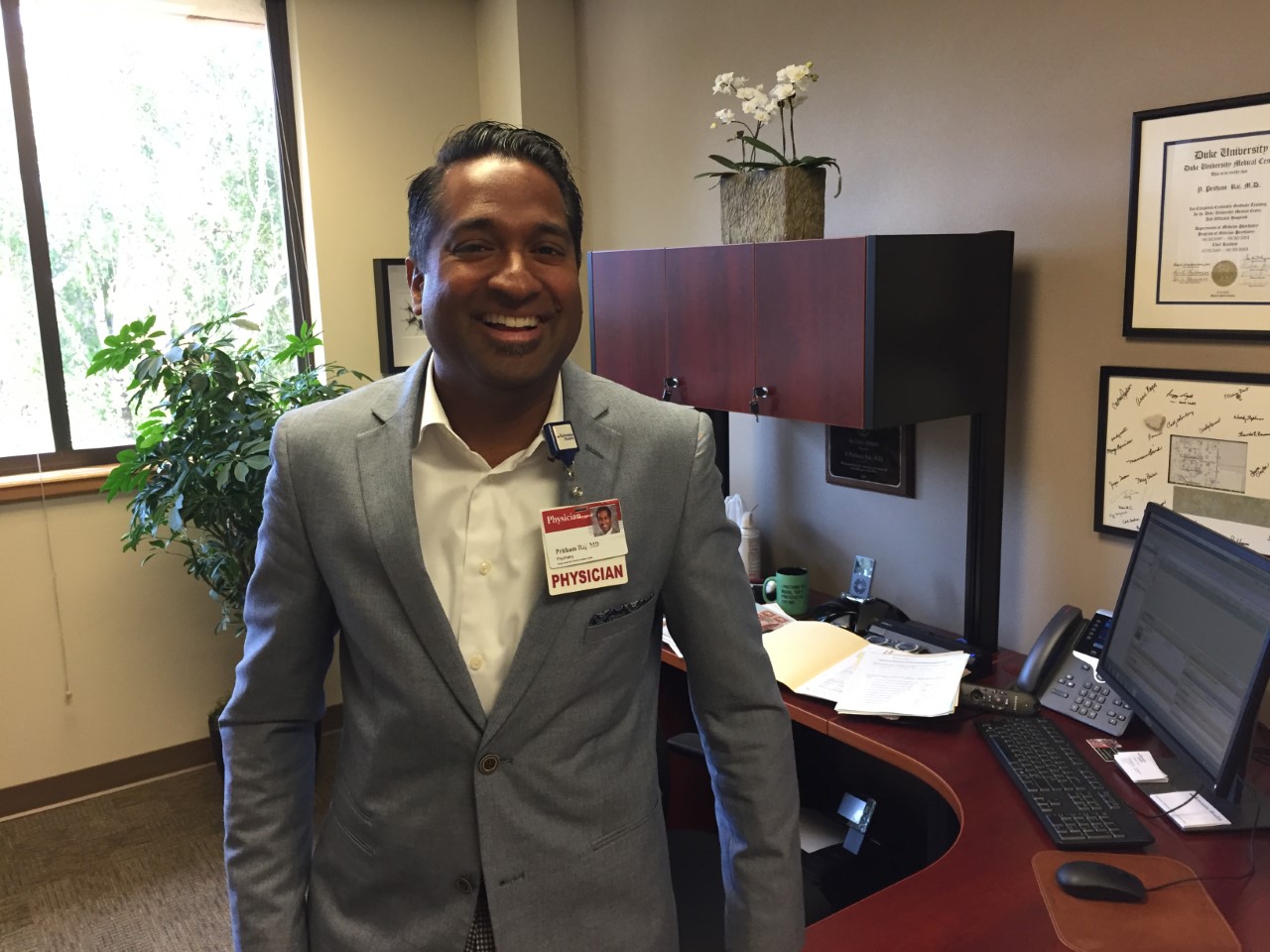 In June, a national study by Mental Health America ranked Oregon last in the country for overall mental health needs, access and outcomes.

Also in June, a mental health center opened that could help turn that around: Adventist Health’s Emotional Wellness Center in East Portland.

The new center will fill an important niche in Portland metro mental health services and be a key partner to the Unity Center, a collaborative psychiatric emergency services which opened in downtown in February.

“Just like the Psychiatric Emergency Services at Unity, this is brand new and novel for the area,” says Dr. Y Pritham Raj, the Emotional Wellness Center’s medical director. “Certainly for the Adventist medical system, this has not been done here in Portland.”

The center is an “intensive outpatient program” or “partial hospitalization program,” in industry lingo. That’s less restrictive than the “legal capture” or “hospital hold” that characterizes some of the Unity Center’s 102 inpatient beds; any of the Emotional Wellness Center’s patients can walk out any time they like.

Which is not to say they aren’t suffering from serious, chronic psychiatric needs. Dr. Raj says the center serves patients who are chronically suicidal “and others who need tweaking: optimization of this distressed tolerance skill set.”

Some of those leaving Unity Center will be referred to the Emotional Wellness Center, Dr. Raj says. In a recent, mid-August visit, a half dozen patients in the center’s recently-redesigned offices read, chatted or patiently waited for appointments or group therapy sessions. It was nothing like the “One Flew Over the Cuckoo’s Nest” stereotype some have of psychiatric settings.

With all the good news around forward-thinking centers such as Unity and the Emotional Wellness Center, Oregon’s lowest-in-the-nation ranking by Mental Health America still raises a troubling question.

To put it bluntly: why are there so many crazy people here?”

Dr. Raj says part of it is a good thing: “a sense of acceptance” for mental illness here in Portland and across the Northwest.

Another part, he says, is “a money issue, an issue of where our government wants to put its dollars.”

“HealthShare Multnomah County, it’s been a challenge, because they don’t have the money, so they’re very critical of length of stays,” Dr. Raj says. “They’ll give us yea number of days to work with a patient. It sets kind of a cap on what we can do.”

Sometimes, he says, that can lead to premature discharge of patients, or hospital visits that aren’t reimbursed.

A Health Share of Oregon representative responded that the organization’s payment policies “encourage movement to the less restrictive setting.”

“The protocols around where Health Share members receive treatment are not based on budget but medical necessity and a desire to ensure patients receive the care they need in the least restrictive setting,” says Stephanie Tripp, spokeswoman.

The Emotional Wellness Center sits on the third floor of “Professional Building #2,” across the street from the main hospital of the Adventist Medical Center. There’s no signage.

“We want it to be inviting and warm and not as, maybe ... psychiatric, if I can put it that way,” Dr. Raj says. “Sometimes psychiatric, we think cold, Spartan, let’s not do damage to anything. Here, patients go, ‘I can function normally. I do belong in an office, not in a place with a bed and four walls.’”

The center serves 11 patients, Dr. Raj says, but is ramping up to 30 patients, with capacity for 50. Besides Dr. Raj, staff include a psychiatric nurse practitioner, director of operations, transportation specialist, three therapists, a case manager, a nurse and front desk staff.

Dr. Raj helped to facilitate the move of Adventist’s inpatient psychiatric facility into the Unity Center, and is a Unity board member. In 2010, after leaving the inpatient med-psych unit at Duke University, he created an outpatient med-psych teaching clinic at Oregon Health & Science University that won the Oregon Psychiatric Association’s Access to Care award.

Anyone Can Walk into the Center

The new Emotional Wellness center is notable for being open to walk-ins off the street, Medicare and Medicaid patients and homeless patients.

“OHSU does not have an [Intensive Operations Center],” Dr. Raj says. “Kaiser does but it’s a closed network, you can’t walk in off the street, you can’t be the Joe Blow who’s homeless. Providence here in East Portland does have an IOP, but they do not take Medicare patients.”

Dr. Raj says a high percentage of the Emotional Wellness Center’s patients — 75 to 80 percent, he guessed — are from disadvantaged socioeconomic groups.

“That’s pretty impressive, to be open to Medicare, Medicaid and walk-ins, as well as picking folks up,” says Gullickson when told of the new center’s ease of access and transportation service.

Well-dressed, personable and impeccably credentialed, Dr. Raj speaks quickly and eloquently, and with dense jargon. The 46-year-old is the kind of thought leader one Adventist spokeswoman casually called a “genius.”

He believes the new center is well located to serve a high level of psychiatric need in East Portland and East Multnomah County.

“The psychiatric burden in East is high, I would say highest in the [metro] area,” Dr. Raj says. “So we’re located in a prime position to help those that need the care the most.”

Within half a mile are Mall 205, the Portland Police Bureau’s East Precinct and the I-205 Multi-Use Path, which has numerous homeless camps.

Dr. Raj emphasizes that Adventist Health planned ahead for overcoming a net reduction of 10 psychiatric inpatient beds as the result of Adventist Health joining Legacy Health, OHSU and Kaiser Permanente in creating the Unity Center.

“Some may look at that and go ‘Ooh, what a tragic loss,’ but here at Adventist, we were already gearing up for this,” Dr. Raj says. “We as a mental health care consortium wanted to deemphasize inpatient care.”

Those with substance use disorders and co-occurring psychiatric needs can get help at the center, Dr. Raj says, once their addiction is controlled.

“They have to be able to sit in a group-based setting for a couple hours a day. So if they’re Jonesing for a hit, it’s going to be tough for them to focus,” Dr. Raj says. “If somebody’s used heroin, but they’ve been clean for two weeks, great, we’re here for you. But active use or withdrawal is going to be tough for our systems.”

Uncertainty About Cost of Services

Dr. Raj and two Adventist Health spokeswomen declined to share information about the cost of units of service at the new center. The current uncertainties in Washington, D.C. may be a factor in the mystery.

“We don’t know what’s to come,” Dr. Raj says. “This great cloud of uncertainty that is surrounding our country right now, all of that feeds into psychiatric and mental health decompensation.”

Dr. Raj says the new center does not offer the controversial electro-convulsive therapy procedure, which involves shocking the brain with electric current, but may offer transcranial magnetic stimulation, which uses magnets to affect the brain’s electrical circuitry.

“I don’t know about that,” Marsh Gullickson says. “What good can come of electrocuting someone’s brain on any level?”

In the end, Gullickson is guardedly optimistic about how much the two new mental health centers will move the needle on Oregon’s continuing mental health crisis — its roots, she says, lie not just in medicine and psychiatry but also in housing, food security, employment, education, and community.

“I think we will see potentially better outcomes, or maybe a higher ranking with centers such as Unity or Emotional Wellness,” Gullickson says, “but until these other social determinants get solved, how can we expect someone’s emotional or mental health or addiction challenges to improve, when they just have to go back out to the same environment with the same issues?”

Thacher can be reached at [email protected].