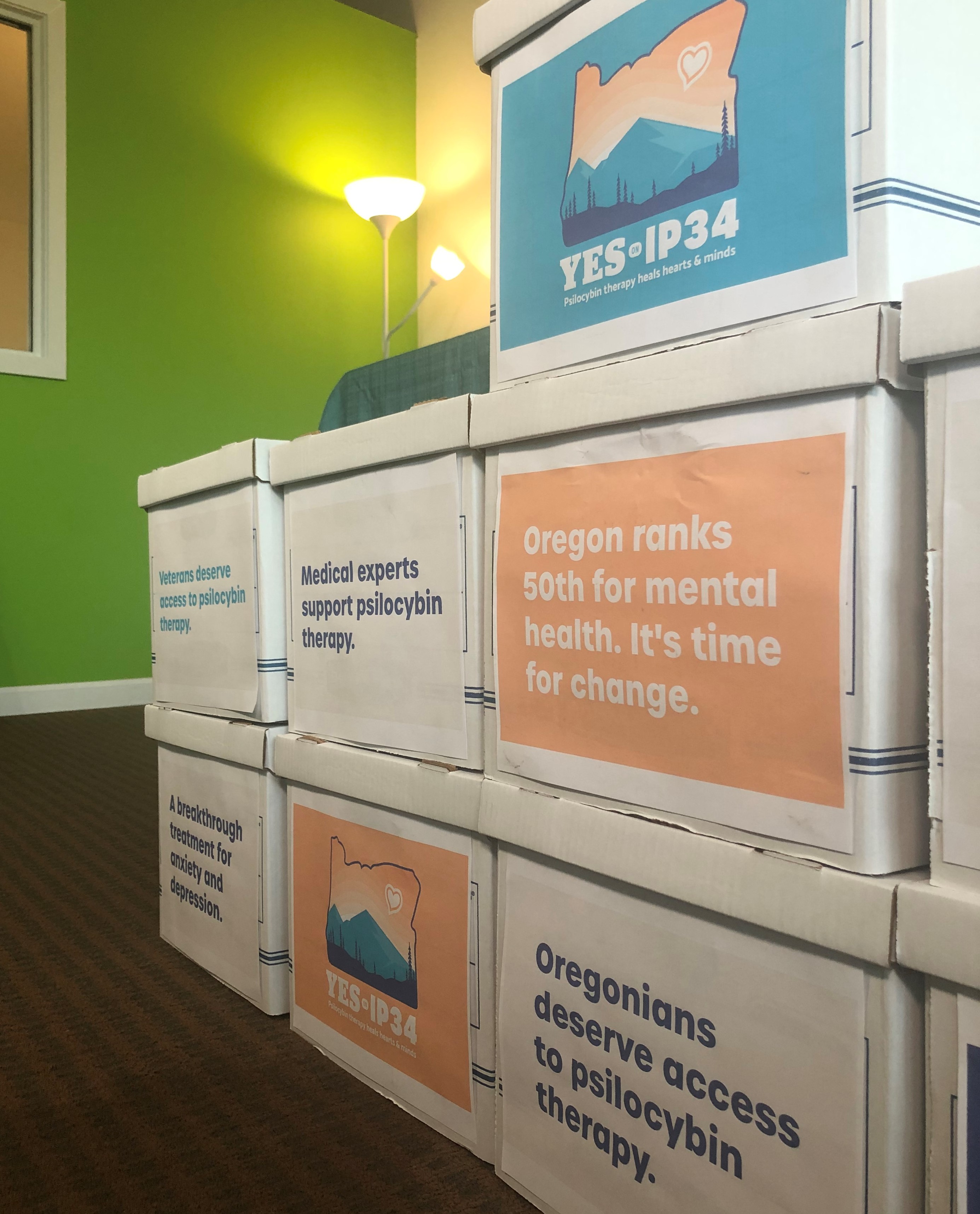 The Oregon Secretary of State's office verified enough signatures to qualify Initiative Petition 34 on psilocybin therapy for the November ballot./Yes on IP 34 Campaign

Thousands of people in Oregon are interested in using psilocybin as a mental health treatment and hundreds are interested in becoming licensed to treat patients or offer services under the voter-approved program.

Among more than 4,400 people who responded to a survey by the Oregon Health Authority, nearly 4,200 said they would like to access services. The top reason cited by about 3,000 people was to improve their well being. Nearly 2,700 people said they wanted to treat their depression or anxiety. The online survey was open to anyone for four weeks, starting Jan. 7, and the results were released later last month.

“We saw strong participation from the community,” Angie Allbee, manager of Oregon Psilocybin Services at the health authority said in a statement. “The survey findings, while preliminary, help us to better understand community interest in accessing psilocybin services, in licensure, and in training program approval. This is an exciting foundation to build upon.”

Psilocybin is a hallucinogenic compound found in about 200 species of mushrooms that grow in Europe, South America, Mexico and the United States. Often called magic mushrooms or shrooms, they have slender stems with a cap. The Oregon Health Authority’s draft rules call for the use of one species – Psilocybe cubensis – which is the best known, grows easily, has been used for centuries and has proven to be safe.

The survey is the first measure of the potential demand for psilocybin services in Oregon. In 2020, voters approved a measure that will establish a state psilocybin program in the Oregon Health Authority by next year. Anyone 21 and older will be able to consume psilocybin in a therapeutic setting without a prescription.

Oregon is the first state to allow the use of magic mushrooms, which have been used recreationally since the 60s in the United States.

They remain banned by the Drug Enforcement Agency, which has classified psilocybin, along with heroin and LSD, as a Schedule 1 substance under the Controlled Substances Act. That means federal authorities consider magic mushrooms to have a high potential for abuse and no legitimate medical purpose. The legalization of psilocybin in Oregon is equivalent to cannabis, which was legalized for medical use in 1998 and for recreational use in 2016.

Studies by Johns Hopkins University in Maryland, and others, have shown that psilocybin can help with depression. A study published by Johns Hopkins last month showed that psilocybin treatment relieved symptoms of major depressive disorder for at least a year. Based on clinical studies, the federal Food and Drug Administration has classified psilocybin as a “breakthrough therapy,” paving the way for potential drug development.

The state survey indicated that people are gearing up to offer their services in Oregon. Among the 660 people who said they’d like to have their training program approved by the health authority, about 60% said they would offer a training program in Oregon, while one-fifth said they would train providers online. About one-third said they intended to only train Oregon residents. Facilitators are taught about dosages and the effects of psilocybin and trained to be therapists.

Nearly 70% of training programs said they would recruit trainers in Oregon, and about the same number said they want to hire licensed mental health professionals to train providers.

About one-third of respondents said they want to become licensed facilitators, giving psilocybin to patients and staying with them during the experience. The effects of psilocybin often last about six hours but they can persist for 12. The drug can induce a variety of emotions, from increased positive emotions to paranoia and even panic. People usually hallucinate about an hour after consumption, researchers say.

Nearly 1,000 people who responded to the survey are interested in growing magic mushrooms and about the same number want to operate a psilocybin treatment center. The program will also need testers. About 225 people who participated in the survey said they would be interested in obtaining a testing license.

I feel that we need to be

I feel that we need to be careful with terminology in this brand new realm, and respected publications like the Lund Report should be especially careful.  I realize that this article is speaking to the survey, as opposed to the legislation.  But as I understand it, "Psychedelic-Assisted Therapy" is not what Measure 109 will usher in;  "Facilitators" are not psychotherapists nor providers, and will not be "trained to be therapists" through the "programs" that may develop as a result of this legislation.

I am posting a link to a recent article from Chacruna Institute for Psychedelic Plant Medicines. This article explains Measure 109 and the structure that is being molded to ensure the safe use of psilocybin by adults in Oregon. Though the use of psilocybin is often associated with mental health and psychedelic-assisted therapy, Oregon will be using a method called “supported adult use” which is very different from therapy. This article explains the differences.