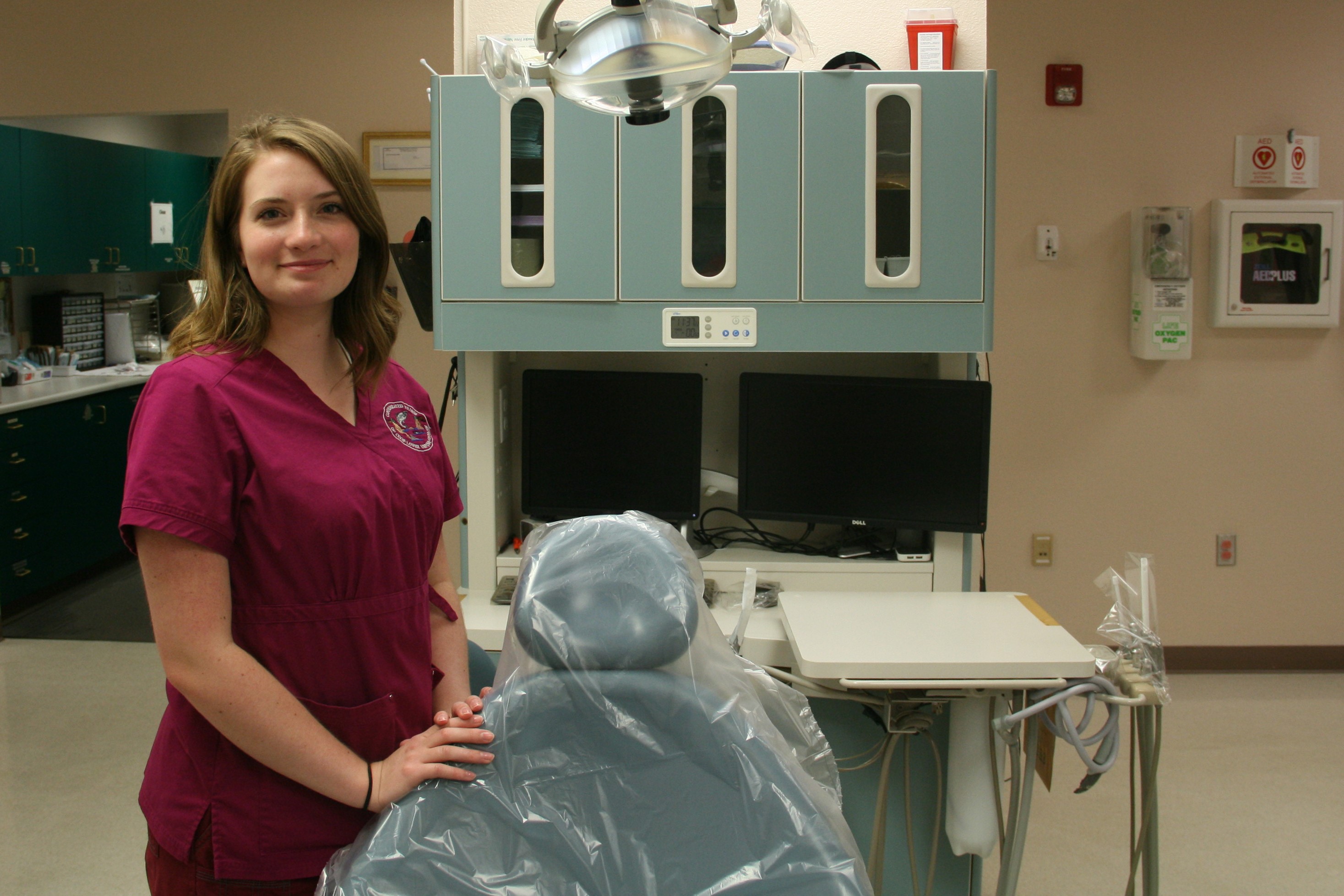 Naomi Petrie is a dental therapist in Coos Bay who is part of a pilot dental therapist program for tribal areas. She is a member of the Confederated Tribes of Coos, Lower Umpqua and Siuslaw Indians./Courtesy of the Northwest Portland Area Indian Health Board

Only about 40% of Oregon dentists accept Medicaid patients. More than two dozen rural communities don’t even have a single dentist.

Those numbers have led to a broader problem: Children and adults end up putting off preventive care. Minor problems become an expensive trip to the emergency room.

Advocates call it an epidemic.

Oregon lawmakers and advocates want to bring systemic changes to the state’s dental care system, with an eye toward boosting access to care in schools and underserved groups like low-income people and rural communities. The most closely watched -- and potentially contentious -- proposal is Senate Bill 1549, which would allow dental therapists to work in the state, creating a new licensed dental profession in Oregon. There currently are none in the state except for a pilot program. The other bill would encourage social work and take other steps to boost school-based oral health screenings and care for children.

There’s no question that dental access in Oregon needs to improve. Just 27.1 percent of adults on Medicaid saw a dentist for any reason in 2015, according to the Oregon Oral Health Surveillance System, an Oregon Health Authority report.

There’s also the need for dental access overall. Oregon has the full-time equivalent of 0.49 dentists per 1,000 people, according to a 2019 report by the Oregon Office of Rural Health. The rates are higher in urban Portland and Eugene.

Care is non-existent in some rural areas. Twenty-six primary care service areas in rural and frontier parts of the state have no dental providers. That includes remote areas like Jordan Valley in southeast Oregon, and North Lake in south-central Oregon.

Advocates of licensing dental therapists in Oregon say the high need for care in the state is one that the profession could help meet. Dental therapists currently only practice in tribal areas in Oregon through a pilot program overseen by the Oregon Health Authority. But they’re catching on from Alaska to Minnesota, as states look for ways to bring dental services into remote areas that may struggle to retain dentists.

“Many of our dental-related issues end up in our emergency rooms and primarily our uninsured and low-income population,” Sen. Laurie Monnes Anderson, D-Gresham and chair of the Senate Committee on Health Care, said in an interview. “This is just one tool in the toolbox.”

Dental therapists can do cleanings and other preventative work, along with simple procedures like filling minor cavities. They aren’t dentists, but they can provide much of the routine work of dentists that prevents minor decay and oral health problems from worsening. They can work in a clinic with a dentist or on their own without a dentist on site. But either way they are under the general supervision of a dentist who can be contacted.

“At the completion of that project, it would be very helpful for the communities already being served to have a seamless transition into a state-licensed program,” said Dr. Miranda Davis, a dentist in Washington state and director of the Native Dental Therapy Initiative of the Northwest Portland Area Indian Health Board.

For the patient, the cost wouldn’t change if they get a procedure completed by a dental therapist instead of a dentist. But it does change how much capacity the dental system in Oregon has, also freeing up dentists to do more complicated procedures.

“When a dental therapist is added to a population, even if they already have a dentist, that dentist is freed up to do more of those complicated procedures,” Davis said.

One is Naomi Petrie, also a member of the Confederated Tribes of Coos, Lower Umpqua and Siuslaw Indians. She’s practiced for the last two and a half years in Coos Bay after going through an intensive program that condensed three years of training into two years.

She said the program has allowed her to return to her home community and provide care, adding stability to a clinic that historically has experienced high turnover of dentists.

"I found out when I started working here that there had been 11 different dentists in the span of 10 years,” she said. “The continuity of care was lacking here.”

She said the program appealed to her because it allows her to provide health services in her home community, where she plans to work long-term.

The Oregon Dental Association, a trade group representing dentists, is opposed to the proposal.

The group is recommending that the state wait for the pilot to run its course first before making a wider move.

“We really want to see those projects work their way through that process before the state has this larger discussion about is dental therapy right in Oregon,” said Jennifer Lewis-Goff, director of government affairs for the dental association.

The Oregon Community Foundation is also backing a bill that is focused on school-based oral health. That bill, House Bill 4127, is chief sponsored by dentist and state Rep. Cedric Hayden, R-Roseburg, Rep. Alissa Keny-Guyer, D-Portland, and Monnes-Anderson. There are 23 legislators co-sponsoring it.

The bill focuses on school-based programs that bring dental hygiene services to schools in several ways. It directs the Oregon Department of Education to incorporate oral health curriculum standards into the state’s next curriculum update in 2024; it directs the Oregon Health Authority to seek federal funding for care coordination for school-based dental programs and ensures that coordinated care organization and public health agencies can continue to be involved in school based programs for children.

The foundation works with other community partners to fund programs that bring dental hygienists into schools to give children oral health screenings. The program has gone into about 275 schools in 22 of Oregon’s 36 counties.

The foundation on Thursday released its commissioned report on child access to dental care that was completed by the Oregon Health & Science University Center for Health Systems Effectiveness.

In  a call with reporters Thursday, advocates called the bill a step in the right direction.

"Unfortunately, the reality is that Oregon is struggling from an oral disease epidemic,” said Melissa Freeman, director of strategic projects at Oregon Community Foundation.

All I can say to the article about access to care is that it proves that we cannot drill our way out of results of an out of control infectious disease regardless of how inexpensive the driller is. Handing the drill to a junior midlevel dental provider is not going to solve the problem of the ravages of this disease or solve the access to care problem. The restorative/surgical paradigm of care is shown to not work in this article and instead of realizing the paradigm is not going to work we are doubling down on the same failed system. When I was a kid the ravages of another infectious disease polio treated the symptoms of the disease with leg braces and iron lungs until a treatment was found the vaccinated us against the disease. Dentistry now has a chemical and a system that allows the infectious disease that produces dental decay to be eliminated. It is time the infectious nature of the disease was recognized and to quit throwing money and solutions that are not going to work and change to an oral health paradigm where a cavity and filling are a failed outcome and we realize the disease is not going to be solved by the current restorative/surgical paradigm