At an informational session before the Legislature adjourned, Greenlick urged a healthcare work group to draft such legislation for the 2013 session
By:
Steve Lindsley

March 8, 2012 – It’s very likely that the 2013 Legislature will consider a bill mandating flu vaccinations for all healthcare workers in Oregon. 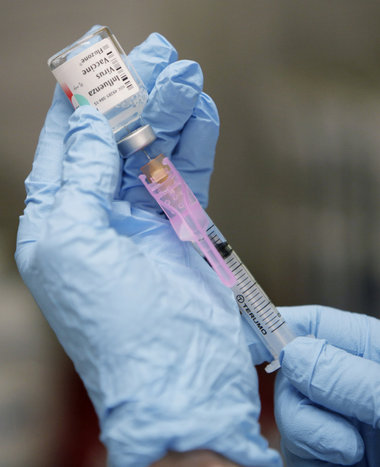 “In my line of work,” Kohn said, “we’ve seen, over the last 100 years or so, a pretty dramatic transition in the health problems that people are facing. It used to be, in the 1900s, that they were communicable diseases and infectious diseases. Now chronic diseases and injuries, by and large, are what are killing people. But, there’s one pretty major exception to that change. That is flu. It has continued to be a major killer. It’s in the top 10 every year in Oregon, as well as around the country.”

Kohn said nobody should be afraid they’ll get the flu when they see their doctor or are hospitalized.

“Really, as a nation, we haven’t done a very good job, in fact it’s pretty embarrassing, how poorly we’ve done in getting health-care workers vaccinated,” he continued.

Statistics from the Centers for Disease Control and Prevention, for the last flu season, showed only about 64 percent of healthcare workers had been vaccinated, according to Kohn, who said people who worked at places where vaccinations were required had much higher rates, perhaps 98 percent.

Kohn indicated that a work group organized by former Sen. Bill Morrisette (D-Springfield) has been focused on this issue, and has 25 members including representatives from hospitals, physicians, nurses and health services’ groups.

Kohn said the work group hadn’t been officially chartered to draft legislation for the 2013 session, but was actively promoting annual flu vaccinations of all Oregon healthcare workers, educating them about the benefits, monitoring vaccine coverage in hospitals and long-term-care facilities and looking into patient safety issues.

In response, Rep. Mitch Greenlick (D-Portland), who co-chairs the House Health Care Committee, urged the work group to draft legislation. “I think we want a bill,” he said. “And, we want one that does something.”

Rep. Jim Thompson (R-Dallas), the other co-chair, took it a step further. “If I were to hazard a guess, I would say there will be a bill in this committee in 2013.”

Rep. Jason Conger (R-Bend) said he’d seen statistics on vaccination rates, but wanted to see numbers on the effectiveness of those vaccinations in reducing influenza.

“Certainly, if you’re asking for the ability for a company to mandate that someone stick a needle in their arm to get a vaccination, it had better be driven by a very real, profound public benefit.”

Effects v. side effects should lead a thinking person to consider globally before trying to mandate this. Has these proposers considered the new personalized medicine barreling toward critical mass? Big pharma is encountering increasing lawsuits. State users of coercion could be at some risk of this as well, over time. One size fits some.

That would be the ultimate!!!

That would be the ultimate!!! Does anyone else not see this as yet another restriction on our freedom, where the government dictates what you do and don't do with your own body?

The vaccine is hardly 100%, and does not always cover the majority of viral strains "out there" in a given year. I agree that this intrusion into personal freedom is over the top.

Somehow we have failed to

Somehow we have failed to instruct some members of the population concerning the effectiveness of vaccinations. It's not about Freedom, it's about Health. The only freedom maintained by the unvaccinated is the freedom to get sick, and pass it on to others. Get vaccinated!

1) Does this mean all ? Administrators, surgeons, doctors, the florist in the gift shop ? Or just the few ? 2) If the benefit is seen as so universal, why are there so many "flu vaccines" which haven't provided any good effect ? 3) Anybody remember the H1N1 pandemic which wiped out most of the world's population before a vaccine could be put in everyone ? 4) I suggest the makers of said vaccines go first. The current "boosted" flu shot for elders will finish out it's testing "officially" in 2014. If you got that one YOU are the test. Please, line up the CEO-everythings and their families first, let them (down to infants) be the test market, without recourse to legal solutions, followed by those who purport to "help" those of us too stupid to shoot an injection of egg products, mercury and "whatever" into us yearly. 5) I have a complicated medical history, did you know that ? Then why indulge in medical malpractice ? That I can sue you for , right ? The drug companies get immunity, why not hold doctors who are in Ashland or the Governor's seat liable. As long as they have licenses.....malpractice. Then listen to the howls "You can't hold US responsible !!!" That's the point !!! Make decisions for me...you're responsible ! 6) I know this is long, but how about we stay home when ill, when we can. And wash our hands several times a day. And look to the southern hemisphere for a clue. They have their flu season 7mos ahead of ours. 7) And lastly. Let's start looking at campaign contributions. Follow the money and we yet find a lobbyist in people's back pockets.....Sheesh. We've lived through over 100 years of "flu seasons" without putting million (billions) in Pharma's pockets. This all started when some patents wore off. It's simple math.

I think that all those

I think that all those writing the mandatory vaccination bills and all those legislators voting in favor of mandatory annual flu vaccinations for health care workers should roll up their sleeves for their own mandatory annual vaccinations first. Policy makers should lose their own health freedom before they are allowed to consider mandated medicine for any other group of people so they can truly understand what they are mandating. Let's see how they like becoming pin cushions for the pharmaceutical industry, first. I'd like to see a bill for that.

Getting the flus shot just

Getting the flus shot just means that more than likely the person won't get the flu. It doesn't mean that they won't be carriers and pass it on.

this is simply a matter of

this is simply a matter of public health and patient safety. If you were in the hospital, would you prefer to be treated by a healthcare practitioner that hasn't had a flu vaccination? Those arguing against having healthcare workers vaccinated may be the same folks that fight water fluoridation....