By:
Peter Wong of Portland Tribune 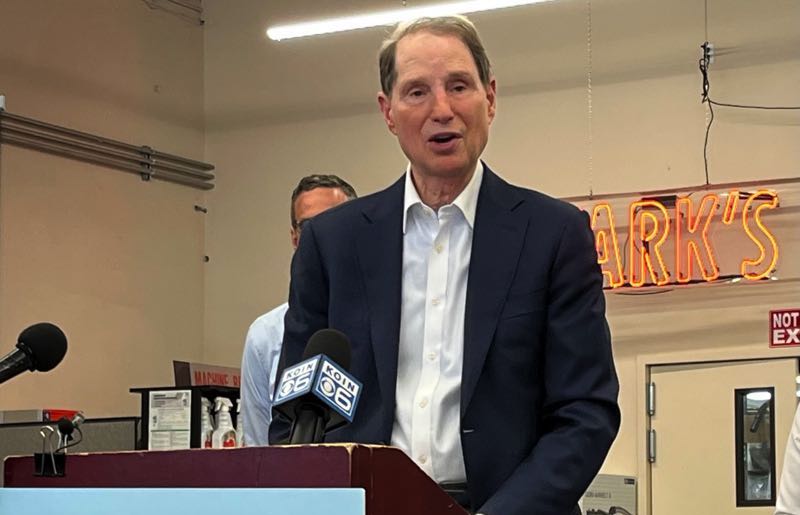 A tired but happy Ron Wyden took a victory lap Monday, Aug. 8, the day after the U.S. Senate approved the largest-ever package of tax incentives for carbon-reduced energy, plus extensions of subsidies for health care and new minimum taxes on corporations to pay for them.

The Oregon Democrat said he had one major disappointment as the evenly-divided Senate passed the plan with the tie-breaking vote of Vice President Kamala Harris. Democrats fell a few votes short of extending a price cap on insulin, which would apply to Medicare recipients, to all people who obtain it through private health insurance.

Still, Wyden never gave up on a plan even when West Virginia Sen. Joe Manchin announced opposition in July, breaking with the other Democrats. Manchin then resumed negotiations with Senate Majority Leader Chuck Schumer, D-N.Y., on what became a greatly slimmed-down version of President Joe Biden’s domestic agenda known as Build Back Better.

As chairman of the tax-writing Senate Finance Committee, Wyden proposed to reshape tax incentives away from oil, gas and coal — fossil fuels whose emissions contribute to climate change — and restore the authority of the federal government to negotiate some drug prices under Medicare, against the wishes of drug manufacturers.

“I get the fact there are a lot of big lobbies that have pulled out all the stops and have always been able to block these kind of reforms,” Wyden told reporters on a video call from his home in Southeast Portland. “It’s been a grueling few months, and especially the last couple of nights were all-nighters.

“But what Oregonians expect you to do is follow through, be persistent, get results. I think the best policy is the best politics.”

The Finance Committee also has legislative authority over the largest federal health insurance programs, such as Medicare, which enrolls more than 60 million people 65 and older and some with disabilities.

Wyden, originally elected to the Senate in 1996, is up for a fifth six-year term on Nov. 8.

What’s in the bill

The legislation (HR 5376) goes back to the House, which was scheduled to return from its current recess to vote on it later this week. Both houses are acting under rules that allow simple majorities to pass budget reconciliation measures; such votes can be held only once during a budget year.

The legislation still proposes $370 billion in tax incentives for clean energy, the largest single investment by the United States in climate change, about half of what was envisioned.

“It seems to me that the current energy system has been failing on two counts. It has not been affordable enough, and it has not done enough to deal with the climate crisis,” Wyden said. Under the new system of tax incentives, he said, a greater reduction in carbon emissions — no matter the technology — will result in greater tax savings. “In effect, science will drive decisions.”

It also restores federal negotiating authority for some drugs under Medicare. Republican majorities took that away in 2003, when Congress authorized prescription-drug coverage under Medicare. The first list of 10 drugs will come up with the start of the new federal budget cycle on Oct. 1.

“It’s going to be a seismic shift in the relationship with Big Pharma, which is not going to be able to charge anything it wants,” Wyden said.

It will cap at $2,000 annually out-of-pocket prescription-drug costs for each of 20,000 Medicare recipients in Oregon.

It also imposes a new 15% minimum tax on corporations, a new 1% excise tax on stock buybacks by corporations, and more money for Internal Revenue Service audits of high-income taxpayers. Wyden said the agency has been short-staffed under Democratic and Republican presidents, and “the working person is not usually the issue” in the enforcement of the complex federal tax code with its myriad of deductions and credits

It omits education and child-care enhancements originally proposed in legislation with a $3.5 trillion price tag over a decade.

The Senate turned back about three dozen amendments to the legislation, offered mostly by Republicans in failed attempts to block passage. However, despite support by seven Republicans and all 50 Democrats, the Senate failed to achieve a 60-vote majority to adopt the same cap on insulin pricing under Medicare for people who obtain the drug under private health insurance plans. That means for now, they will pay more for a drug that has tripled in cost during the past decade.

“Insulin is not any different than it has been for years,” Wyden said. “The reason they are doing it is because they can get away with it.”

After an investigation concluded in early 2021, Wyden and Charles Grassley — the Iowa Republican who led the committee before Wyden — came up with legislation that gave insulin makers a choice between reducing its cost, paying a penalty if they maintain current prices, or paying even more in penalties if they increase prices. Although the Finance Committee approved that bill on a split vote, it never reached a vote of the full Senate because the then-majority Republicans were divided.

But Grassley was among the 43 Republicans who voted no on applying the Medicare cap to all insulin pricing.

“We saw the overwhelming majority of Republicans, after all these big speeches, go the other way,” Wyden said. “Millions and millions of Americans, and thousands in Oregon, will have to face those same prices because they’re in the private sector.

“You’d better believe that I am going to make Republicans in the Senate vote on this again and again as chairman of the Finance Committee.”

Peter Wong is a reporter for the Portland Tribune and can be reached  by email at [email protected]. This article is used with permission of the Pamplin Media Group. Read more from Oregon’s largest source of independent local news at pamplinmedia.com.

Aug 9 2022
News source:
Portland Tribune
Keywords:
Congress, wyden
×
This article is for premium subscribers. If you are one, please sign in below.
You can see two more premium stories for free. To subscribe, click here. We depend on premium subscriptions to survive, and they are tax deductible.
Sign InGo Premium Not now