Writing Your Way Through Cancer

Earth, wind, sky, clouds, rocks
Have me,
If you will.
This body — no longer young
Not quite old.
From the Earth we come, (capital E)
To the Earth we’ll return.

When Lynn Scozzari wrote the beginning lines of that poem, “The Offering,” in 2013, she was staring at a photo of a naked woman seated on a rock, her arms thrust open to a valley below. Scozzari herself was in a conference room of the cancer center at Scripps Green Hospital in La Jolla, Calif., seated at a table stocked with coffee and tissues.

The year before, Scozzari had finished treatment for stage 4 breast cancer. Now, she was meeting with other patients and survivors who were also writing about their cancer experiences. Their assignment was to pick a black-and-white photo from a collection of images spread out on the table and write about it. 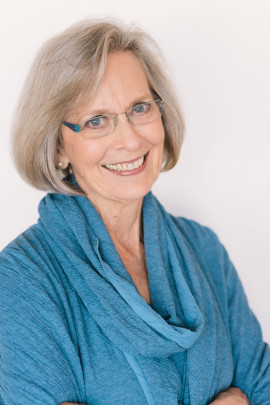 “I remember I was very guarded because I had felt extremely vulnerable during my treatment,” said Scozzari, describing how she felt when she joined the writing group. “The whole experience of being shuffled from doctor to doctor and poked and prodded … left me self-conscious and very protective.”

But she quickly relaxed — and then she found her inspiration. She still keeps an electronic copy of the poem she wrote that day. “The photo spoke to me, and I was able to express something inside of me,” she said. “The group helped me open up.”

Scozzari credits the group’s organizer, Sharon Bray, for that. Bray, a woman in her early 70s with a soft, gray bob and glasses, has led cancer patients and survivors in “expressive writing” workshops for more than 15 years. She has founded writing programs at three health care facilities in California.

She shares with her students a passion for writing, as well as that more harrowing kinship: In 2000, she learned she had a preliminary, noninvasive form of breast cancer known as ductal carcinoma in situ, in which abnormal cells appear in the breast milk ducts.

After writing throughout her radiation therapy, Bray now helps others write through their illnesses by leading workshops, authoring a column and maintaining a blog.

Expressive writing is about emotional disclosure, said Dr. Adrienne Hampton, an assistant professor of family medicine and community health at the University of Wisconsin. “It can be trauma-focused, or it can be aspiration-focused,” Hampton said. “Really, the key is just that it involves either conscious or subconscious emotional processing around a given topic.”

Expressive writing gained the attention of psychologists and medical doctors in the 1990s, when psychology professor James Pennebaker wrote a series of articles about the value of disclosure and writing in the healing process. Since then, multiple studies have revealed writing’s salutary effects on people who are combating illnesses.

In a study of 107 patients with asthma or rheumatoid arthritis, participants were asked to write either about the most stressful event of their lives or their day-to-day experiences. The group that wrote about a traumatic experience had less severe symptoms four months later.

Researchers have found writing can reduce symptoms of irritable bowel syndrome, speed healing of wounds and improve the chances of quick re-employment after being laid off.

After her breast cancer diagnosis, Bray began reading about the work of Pennebaker. “All the light bulbs went off,” she said, “and I thought, ‘This is my work.’ It was like a calling.” She began by leading programs pro bono in 2001 at a Palo Alto nonprofit now known as Bay Area Cancer Connections.

In 2004, she founded a writing program at Stanford Cancer Center, and has since launched programs at Scripps Green and at the University of California-San Diego’s Moores Cancer Center. She has also published two books about writing and cancer.

Cancer was not the first challenge Bray tackled with writing therapy. In 1968, she left her native California for Canada to protest the Vietnam War and accompany her husband, Larry, during his doctoral studies. He drowned while swimming one night about 13 years later, leaving Bray alone with their two young daughters. She began seeing a therapist and, as a result of her sessions, started writing poetry about her marriage and her husband’s death.

It helped that her therapist looked like Robert Redford, Bray mused. But she especially appreciated a ritual they developed, in which she would write a poem and read it aloud at the beginning of a session, after which the therapist would say “thank you.”

Bray found that simple response unobtrusive and affirming. She would later adopt it in her own workshops.

In 1989, eight years after Larry’s death, Bray remarried and moved back to California with her new husband — also a native Californian.

Writing seems like a natural fit for Bray, who has some of an essayist’s peculiarities. She begins an interview by warning that she may “wax eloquent ad infinitum” about her work, and she responds to bullet-pointed emails with long, narrative paragraphs in a fanciful Candara font.

But it took a while for Bray to become a full-time writer. She went through a string of occupations first: elementary school teacher, doctoral student in applied educational psychology and employee at an international career transition firm.

Most of Bray’s workshops have 10 to 12 participants, run from two to three hours per session and last for 10 weeks. Participants learn about the groups in different ways, including online searches, physician referrals and fliers Bray puts up around the hospital.

People undergoing any kind of cancer treatment are welcome to attend, as are survivors up to five years out of treatment. The only people Bray discourages from participating are the newly diagnosed, because they are usually too overwhelmed with the immediate decisions confronting them to focus on a writing group.

Bray starts each meeting with a short, guided meditation and a quick warmup writing exercise. Then, the participants engage in a longer writing session based on a prompt. Afterward, Bray invites volunteers to read aloud what they’ve written and picks out one thing she especially likes about each person’s work. Then she says “thank you.”

Bray uses a wide variety of prompts: childhood memories, what you want most in a doctor, how you would approach cancer if it were a country. For the first class, the prompt is always the same: Write about the moment you learned you had cancer.

Tom Friedman, a licensed clinical social worker at Scripps who worked with Bray, said participants often told him how much they loved her program.

“It’s not just a support group; she has a real curriculum that she’s developed,” Friedman said. “It requires a high degree of sensitivity and professionalism.”

Sometimes workshop participants write essays, and sometimes they turn to verse. “I’ve had some of the most extraordinary poetry from people who are dying,” said Bray. “When they read aloud, it brings the entire group to tears.”

Some participants publish their work. One of them, Ann Emerson, was published in The American Poetry Review a few weeks before she died.

Bray’s sessions often enhance the physical and emotional well-being of the participants. Cathy, a patient with breast and bladder cancer who asked to go by a pseudonym to protect her medical privacy, said she slept better on nights after the writing sessions. Scozzari said she felt more comfortable opening up to people about her cancer than she had throughout her treatment.

Cathy and Scozzari say the members of their respective groups have stayed in touch.

This summer, Bray moved from California back to Canada to be close to family. Friedman said Scripps Green has been unable to find a suitable substitute to lead its writing program.

Bray hopes to start a similar program in Toronto, helping new groups of patients and survivors explore their feelings about the most challenging — and in some cases, the last — chapter of their lives.

Ann Emerson, in the opening lines of one of her poems, summed up the grim yet hopeful perspective of many cancer patients:

I stand at the window where
the world ends, barely breathing,
reciting a poem to myself:
I believe in this ordinary day,
a day I can still make it outdoors alive.