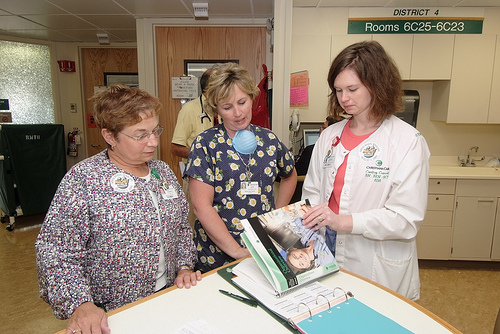 July 15, 2013—Concern is growing about the pressure Oregon’s healthcare workforce will experience once approximately 1.3 million Oregonians either become eligible for Medicaid or be required to purchase health insurance privately or through Cover Oregon, the state’s developing health insurance exchange, when the federal Affordable Care Act is fully implemented in January 2014.

“We’ve got a steam engine coming down the tracks in January 2014,” said Dr. Lisa Dodson, chair of the Oregon Healthcare Workforce Committee and director of Oregon Health & Science University’s Oregon Area Health Education Centers program. “We simply do not have the workforce that we need.”

The term “workforce” refers to the number of family doctors, nurse practitioners and other primary care physicians who provide basic healthcare. How to best make use of that workforce in the coming months was the subject of numerous recommendations in a report written by the Oregon Healthcare Workforce Committee.

The report’s recommendations focus exclusively on the state’s existing primary care workforce. “Training any significant number of new primary care providers [by 2014] is out of the question,” the report found.

“We’re not going to get [a bigger workforce] by cranking out new providers quickly, nor can we do it by outcompeting everybody else in the country,” Dodson said, describing those two ways of generating more family physicians as the “usual way which you address workforce.”

The committee made four recommendations that are short-term and immediate, meaning they can be accomplished before 2014. They are:

The recommendations, Dodson said, “do not necessarily provide the biggest bang for the buck, but can be implemented the most quickly. They are relatively quicker than starting a new medical school, new residencies.”

Some longer-term recommendations include ensuring that all medical students in Oregon have some exposure to practicing in rural parts of the state; adding three residency slots in family medicine programs, and adding at least two residencies to the number of community-based residencies, such as in psychiatry or internal medicine.

Currently, there are 23 residency slots throughout the state. “We just don’t produce that many family physicians,” said Kerry Gonzales, director of the Oregon Academy of Family Physicians.

And in the last licensing cycle, Oregon lost 225 physicians to retirement and other reasons. Dodson calls the statistic “alarming.”

Oregon ranks 39th in the nation with regard to the ratio of primary care residents per 1,000 people. Dodson says approximately 13 to 15 residencies would need to be added to put Oregon above the 50th percentile.

Dr. Joe Robertson, president of Oregon Health & Sciences University and a member of the Oregon Health Policy Board, said that retaining new primary care physicians would naturally result from recruiting students to do their residencies in Oregon.

“It really doesn’t matter if we train them as a medical student or as a resident,” he said. “If you train them here, you have a good chance of keeping them.”

This year, the Legislature took two big steps toward improving the healthcare workforce shortage in rural areas of the state by passing two pieces of legislation aimed at encouraging family physicians to practice in rural areas.

The Legislature allocated one million dollars to OHSU’s Office of Rural Health’s loan forgiveness program, which forgives up to $35,000 of a medical student’s loans if that student agrees to practice in a rural area.

And Senate Bill 440 created a new loan repayment program for primary care doctors and nurses who agree to work in rural and underserved areas and serve Medicaid and Medicare patients.

Gonzales said both pieces of legislation will have a profound impact on motivating medical students to not only study in Oregon, but stay in the state to practice.

“Medical students carry such a huge amount of debt when they graduate from medical school, it’s really difficult for them to choose to practice in rural areas,” she said.

The workforce committee’s report recommends implementing a billing system that reimburses doctors for outcome- and evidence-based medicine. Such a billing system, Dodson said, would accelerate the creation of primary care medical homes throughout the state, and also enable physicians to work at the “peak of their license,” or provide services they are trained and best suited to do.

For example, Dodson—and many others who want Oregon to embrace coordinated care and medical homes—think primary care doctors shouldn’t be meeting with their patients for hypertension checks and prescription refills. Those kinds of procedural, brief and preventive checks can be handled via emails or phone calls, and by a nurse or physician assistant.

The most effective way to have such a system implemented throughout the state is for “[the Oregon Health Authority] to exert their authority,” she said.

“It gives providers the ability to provide care in these new models,” Gonzales said.

Dodson calls naturopathic and homeopathic doctors a “ready made, ready-to-go” group of providers that could go a long way toward solving workforce shortages in Oregon.

“The reason we singled them out is that they are the closest equivalent to the medical doctor that we have,” Dodson said. “They could take on a lot of the load of the primary care system without any new programs being created.”

But many insurance companies do not recognize naturopaths as primary care providers. And, despite explicit language prohibiting discrimination against particular providers groups in the legislation creating coordinated care organizations, naturopaths have struggled to work with CCOs. Many in the medical community do not regard them as legitimate primary care doctors because the way naturopaths practice medicine is not necessarily scientifically or evidenced-based.

Laura Farr, president of the Oregon Association of Naturopathic Physicians, did not return a call for comment by press time. But a white paper the association published in November 2012 points out that naturopathic medicine emphasizes preventive medicine and patient-centered care—what have become cornerstones to Oregon’s new coordinated health model.

Dodson warns that if Oregon’s workforce shortages are not dealt with, health reform will back fire. “When people come in and they have health insurance, and they can’t schedule an appointment with a primary care practitioner, where do they go? Straight to the [emergency room],” she said.

Gonzales agreed, saying that any additional strain that will be added in the coming years will quickly become very apparent.

When Dodson presented the committee report to the Oregon Health Policy Board in April, Eric Parsons, the board’s chair, asked the Oregon Health Authority staff to examine the reports’ recommendations, and determine which could be implemented. An update has not yet been provided.

Image for this story by Christiana Care (CC BY-NC-SA 2.0) via Flickr.