By:
>Liz Szabo and Sarah Jane Tribble and Arthur Allen and Jay Hancock 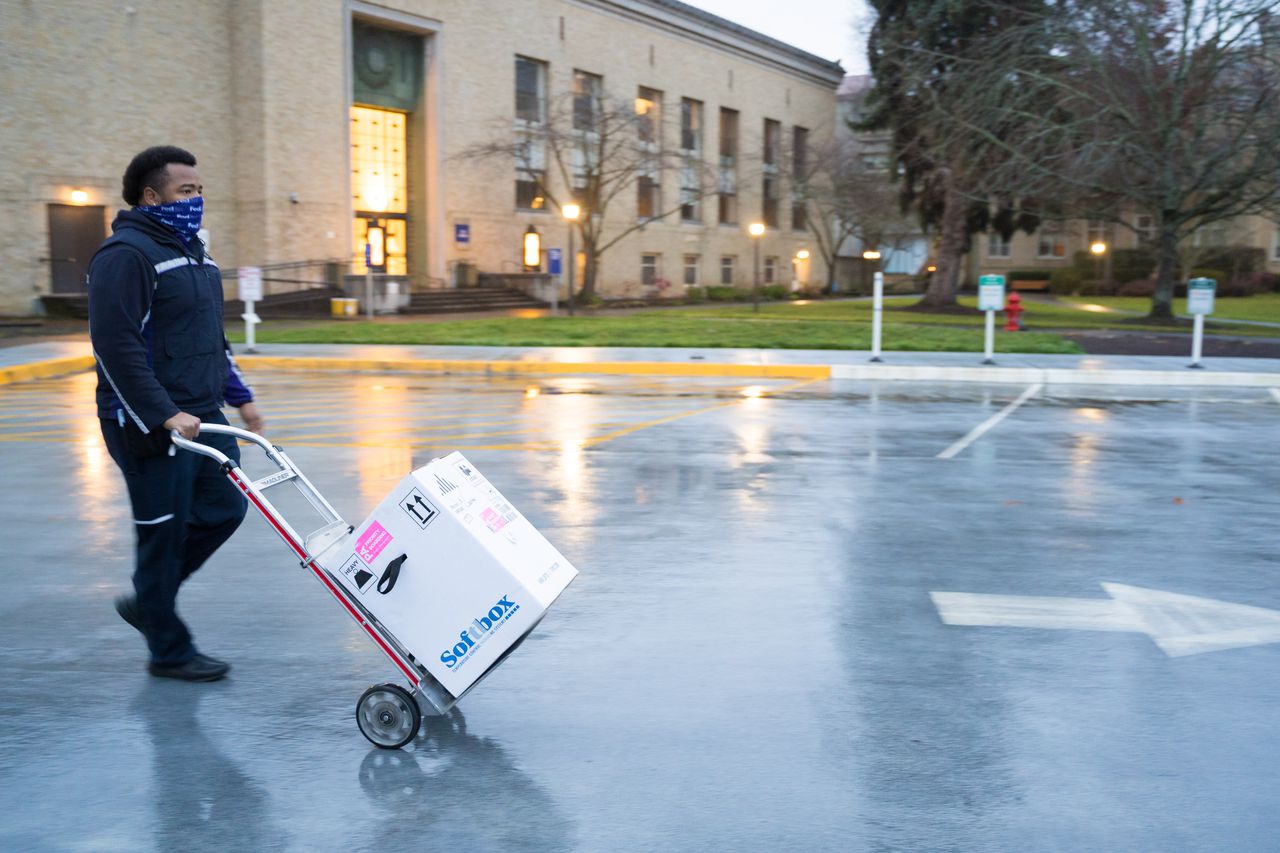 Americans are dying of covid-19 by the thousands, but efforts to ramp up production of potentially lifesaving vaccines are hitting a brick wall.

Vaccine makers Moderna and Pfizer-BioNTech are running their factories full tilt and are under enormous pressure to expand production or collaborate with other drug companies to set up additional assembly lines. That pressure is only growing as new viral variants of the virus threaten to launch the country into a deadlier phase of the pandemic.

“The big problem is that even if you can get the raw material and get the infrastructure set up, how do you get a company that is already producing at maximum capacity to go beyond that maximum capacity?” said Lawrence Gostin, a professor of global health law at Georgetown University.

Ordering the companies to work 24/7 “would be a naïve solution,” said Dr. Nicole Lurie, a senior adviser to the CEO of the Coalition for Epidemic Preparedness Innovations, an international group that finances vaccines for emerging diseases. “They’re probably already doing that to the extent they have the raw materials.”

Lurie added, “If you completely wear people out, mistakes happen. You have to balance speed with quality and safety.”

The technological challenges involved are daunting, and the companies haven’t been forthcoming about what’s needed to overcome any supply shortfalls.

Forcing other companies to start making the vaccines might not work either, Gostin said.

“I’m not sure if Biden could require a private company to transfer its technology to another company,” Gostin said. “That is highly questionable legally. … President Biden’s room for maneuvering isn’t as great as people think.”

Drug companies define “trade secrets” broadly, Fox said. “In general, drug companies don’t have to tell me who is making their product, where it’s made, the location of the factory. … That’s considered proprietary.”

Part of the challenge relates to how these vaccines are made. The first two authorized products use lipid nanoparticles to deliver a snippet of the coronavirus’s genetic material — called messenger RNA, or mRNA — into cells. The viral genes teach our cells how to make proteins that stimulate an immune response to the novel coronavirus.

Messenger RNA is fragile and breaks down easily, so it needs to be handled with care, with specific temperatures and humidity levels.

The vaccines “are not widgets,” said Lurie, who served as assistant secretary for preparedness and response at the Department of Health and Human Services during the Obama administration.

Every step, experts say, to get vaccines to market has its complexities: obtaining raw materials; building facilities to precise specifications; buying single-use products, such as tubing and plastic bags to line stainless steel bioreactors; and hiring employees with the requisite training and expertise. Companies also must pass safety and quality inspections and arrange for transportation.

The Defense Production Act, for instance, would allow the government to commandeer a plant that already has a fermenter — there are plenty in the biotech industry — to expand production. But that’s just the first stage in making an mRNA vaccine and, even then, it would take about a year to get going, said Dr. George Siber, a vaccine expert who is on the advisory board of CureVac, a German mRNA vaccine company.

Companies would first have to do a breathtakingly thorough cleaning to prevent cross-contamination, Siber said. Next, they would need to set up, calibrate and test equipment, and train scientists and engineers to run it. Finally, Siber said, unlike a drug, whose components can be tested for purity, there’s no way to be sure a vaccine produced in a new facility is what it claims to be without testing it on animals and people.

“Making vaccines is not like making cars, and quality control is paramount,” said Dr. Stanley Plotkin, a vaccine industry consultant credited with inventing the rubella vaccine. “We are expecting other vaccines in a matter of weeks, so it might be faster to bring them into use.”

However, even that will require patience. Johnson & Johnson, expected to announce clinical trial results this month, has said that it won’t be able to deliver as many shots as planned because of manufacturing delays. The company did not confirm a manufacturing delay and declined to respond to questions.

AstraZeneca’s vaccine, also funded in part by U.S. taxpayers, is in use already in the United Kingdom and India, but the Food and Drug Administration has raised questions about its late-stage trial, so it may not be available here until the spring.

Novavax, another U.S.-funded vaccine maker, has been plagued by delays and only recently began recruiting volunteers for its big trial. Merck, the most recent company to get federal support for covid vaccines, announced Monday it was scrapping its two candidates after they failed to produce adequate immune response in early tests.

Pfizer, which has committed 200 million doses to the U.S. government by the end of July, said last week it expected “no interruptions” in shipments from its primary U.S. covid manufacturing plant in Kalamazoo, Michigan. Pfizer spokesperson Sharon Castillo said the company has expanded manufacturing facilities and added more suppliers and contract manufacturers. Those efforts, and the company’s announcement that its five-dose vials actually contain an extra dose, mean “we can potentially deliver approximately 2 billion doses worldwide by the end of 2021.”

The U.S. government also has an option to acquire another 400 million doses of the Pfizer-BioNTech vaccine, though the company declined to provide details on that option when asked.

But countries around the world are competing for the same supplies and raw materials, Gostin said.

Biden could use the Defense Production Act “to force Pfizer to prioritize U.S. contracts, but that would be politically risky,” given that other countries could retaliate by hoarding supplies. Although Pfizer is an American company, it has partnered with BioNTech, of Germany, to make its covid vaccine. “That would lead to a global mess.”

Trying to corner the world market on vaccine ingredients or supplies would look bad, experts say, given that the United States just this week joined Covax, an international venture to source and distribute vaccines, in an effort to ensure poor countries aren’t left behind.

Paradoxically, the rush to get vaccines to market may have resulted in a less efficient manufacturing process.

Vaccine companies typically spend months making their factories run as efficiently as possible, as well as finding an ideal dose and the most effective interval between doses, Lurie said. Given the urgency of the pandemic, however, they delayed parts of this process and launched straight into mass production.

And forcing other companies to make covid vaccines could jeopardize production of other important shots, such as measles, said Dr. Amesh Adalja, a senior scholar at the Johns Hopkins Center for Health Security. Routine childhood immunization rates have fallen during the pandemic, raising the risk of epidemics.

Using the act to prioritize covid vaccine manufacturing has already disrupted supplies of at least one drug, Fox noted. In December, Horizon Therapeutics warned doctors and patients to expect a shortage of a drug called Tepezza, used to treat thyroid-related eye disease, because its manufacturer was ordered to prioritize covid shots.

Lawmakers and consumer advocates such as Public Citizen called on the government to use the Defense Production Act more aggressively. In a letter sent earlier this month, Sen. Elizabeth Warren (D-Mass.) and Rep. Katie Porter (D-Calif.) said Moderna should share its technique for stabilizing its vaccine at normal refrigerator temperatures, without “ultracold” freezers.

Since Moderna’s effort is federally funded, the government presumably has march-in rights and could take over production, said Mike Watson, former president of Moderna subsidiary Valera, in an email. “The reality is that however far you push production capacity, you sooner or later reach a bottleneck.”

Experts say it’s not as simple as demanding that glassmaker Corning step up and make glass vials, for example. Of course, the vials will need to meet rigorous requirements. But there’s also this: The U.S. is facing a shortage of mined sand, the main component needed to make glass vials.