Who Are America’s Caregivers? Nearly A Quarter Are Millennials 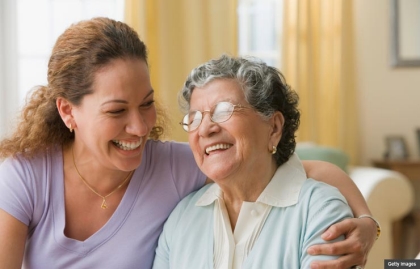 Caring for older relatives is usually a task associated with Baby Boomers, the 50- and 60-somethings who find their aging parents need assistance. But almost a quarter of the adults who take care of older people – on top of their regular jobs and responsibilities – are between the ages of 18 and 34, according to research by the AARP Policy Institute and the National Alliance for Caregiving.

As millions of Americans are expected to live longer than they used to – often losing the ability to do so independently – their families and communities are grappling with how best way to take care of them. KHN focused on the problem in a Dec. 2 webinar with advocates and policymakers.

About 40 million Americans considered themselves caregivers in 2013, according to an AARP report, said Susan Reinhard, senior vice president at the AARP and one of the webinar’s panelists. Those people are typically women, and their median age is 49. The work they do caring for older relatives – usually parents and grandparents – was estimated that same year to be worth about $470 billion.

And it often takes a toll. Of the caregivers who participated in a support program run by the Department of Health and Human Services Administration for Community Living(ACL), about one third said they spend more than 40 hours per week caring for an older relative. More than 1 in 4 labeled stress as the most significant challenge they faced; 11 percent said financial strain. Another 16 percent said their biggest concern was not having enough time to do everything.

“A significant number are doing more than just the basic assistance with family living,” Walker said.

The issue has started getting more attention from policymakers. A number of bills pending in Congress could alleviate some of the pressures caregivers face, for instance offering Social Security credits for people who have to take care of their relatives, said Kathleen Kelly, executive director of the Family Caregiver Alliance, a nonprofit advocacy organization. These credits would help people who had to drop out of the workforce to take care of a family member preserve their contribution to Social Security retirement benefits.

The Institute of Medicine is also putting out a report next year on the state of family caregiving, and a number of states have passed or are considering legislation that would help hospitals better communicate with and train an older person’s caregiver, especially after a hospitalization.

“In the past five years, a switch has been flipped, and there’s a greater awareness of aging and caregiving,” Kelly said.

That awareness may extend beyond Capitol Hill and various state houses.

Last month, Democratic presidential front-runner Hillary Clinton proposed a tax credit to help caregivers, which would pay back up to $1,200 of the money they spend. Her plan would also give Social Security credits for people who stop working because of their caregiving responsibilities.

That’s already a shift from the last presidential election, when caring for older relatives was hardly discussed.

It’s unclear whether Clinton’s plan will push more candidates to address the needs of caregivers. But “that doesn’t mean we can’t raise these issues,” Kelly said.