What Oregonians Should Know About The Governor Candidates And Health Care 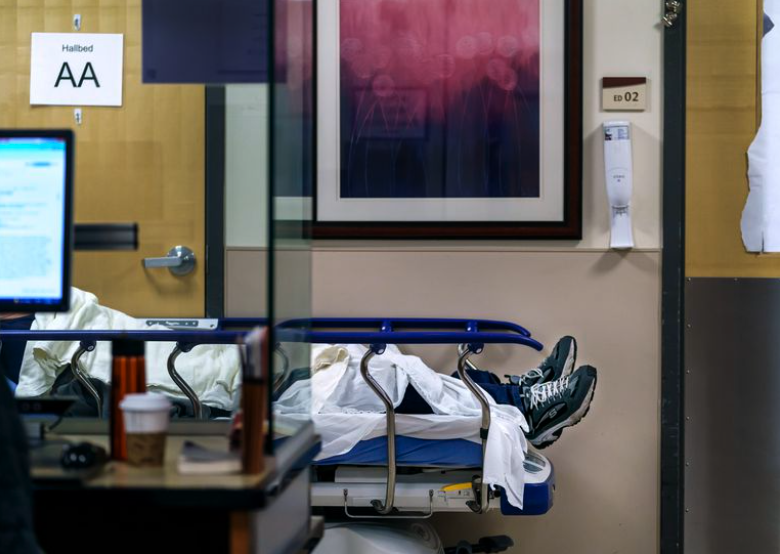 A patient waits for care in the hallway of the emergency department at Salem Health in Salem, Ore., last January. Oregon's three candidates for governor have different views on how to handle hospital staffing issues./Kristyna Wentz-Graff/OPB

This article was republished from Oregon Public Broadcasting.

The ongoing fallout of a global pandemic, a shortage of nurses, rising politicization of vaccines — these are among the health care policy issues that will challenge Oregon’s next governor.

Here’s where the candidates stand on vaccination, the pandemic and the health care industry — based on their own words and their voting records.

Political polarization over the pandemic fueled a new wave of misinformation about vaccines.

Even before that, kids in Oregon were less likely to start kindergarten with all their childhood vaccines than their counterparts in other states. In 2021, the exemption rate for Oregon kindergarteners was 5.4%, compared to a national average of 2.2%.

The lower vaccination rate makes the Portland metro area a known potential hotspot for infectious disease outbreaks like the measles.

Of the three candidates, Tina Kotek is the only one to support narrowing the broad grounds for exemptions to school vaccine requirements in Oregon law.

In 2019, Kotek voted for legislation that would have removed exemptions for philosophical and religious reasons. The bill received pushback from vaccine opponents who said it infringed on parental rights. In the end, Democrats agreed to kill it to help end a walkout by senate Republicans.

“My priority in this area will be on increasing awareness and public education about the importance of childhood vaccinations and making sure it is easy for parents to vaccinate their children,” Kotek told OPB in response to a survey sent to all the candidates that included questions about their stances on health care issues.

She wrote that she does not support changing the list of required vaccinations to include a COVID-19 shot “at this time,” but said she will listen to experts and scientists on decisions related to public health.

In March, she told Willamette Week she would support requiring COVID-19 vaccines for school attendance after the shots get full FDA approval.

Drazan and Johnson both support Oregon’s current law giving parents broad grounds to exempt their children from the routine childhood vaccination requirements for public schools, and voted against past efforts to narrow it.

“While I am personally supportive of vaccines and recognize the vital role they play in keeping our kids and our communities safe, I believe that parents and families should be able to make the decisions that are right for their kids,” Johnson wrote to OPB.

Both Drazan and Johnson oppose requiring a COVID-19 vaccination for school attendance.

“Absolutely not,” Drazan wrote in response to OPB’s question on the matter.

In November, Oregon voters will decide on Measure 111. It would amend the Oregon Constitution to create a new individual right to access affordable health care, similar to the right to a K-12 public education.

The Legislature referred Measure 111 to the ballot in a party line vote — Democrats in favor, Republicans opposed. And they disagree on what it means.

Democratic legislators pushing for it said it sets a goal — equal access to health care for all — while leaving it up to the Legislature to define what that means and how to fund it.

Republican opponents said it could potentially cost the state billions of dollars and take money away from other core services.

The candidates have very different takes too.

Kotek, who supports Measure 111, describes it as a way to shield Oregon from any future attempts by Congressional Republicans to cut Medicaid or Obamacare.

She wrote that if the measure passes, as governor she would try to limit the financial implications and would hold Democrats to their word that the measure is “aspirational” and not a guarantee of health care for all.

“I believe we can do a better job of connecting Oregonians with health care by improving the current system than we can by locking ourselves into a constitutional mandate,” Drazan wrote.

Johnson said she opposes government-run health care and opposes “plans to raise taxes to declare health care a universal right,” but if Oregonians pass the measure, she will implement it “if there is a financially feasible way to do so.”

The candidates’ voting records on expanding access to affordable health care also differ. In 2015, during Kotek’s tenure as speaker of the house, the Legislature extended Medicaid coverage to undocumented immigrant children who qualify. Kotek and Johnson both voted for the bill, which passed with bipartisan support. Drazan was not yet serving in the Legislature.

In 2017, again under Kotek’s leadership, the Legislature made undocumented adults eligible for Medicaid. Johnson and Kotek voted for the bill. Drazan voted against it.

When the candidates discuss the pandemic, they talk about it in the rearview mirror. For Drazan and Johnson, it’s an opportunity to hammer Kotek on some of the least popular and most questionable decisions made by her ally, Gov. Kate Brown, like keeping public schools closed to in-person learning in the spring of 2021, even after teachers received priority for vaccination.

With updated vaccines available and death rates in Oregon about a quarter of their 2021 peak, COVID-19 poses less of a threat to most Oregonians than it once did. But the impacts of the pandemic are not definitively over, particularly in the health care sector, and COVID-19 continues to cause illness and death.

OPB asked each candidate about the most important thing Oregon should do to mitigate the ongoing harm caused by COVID-19.

Drazan didn’t point to any statewide actions, framing the pandemic as a matter of individual responsibility at this point.

“I trust Oregonians to talk to their medical providers and respond to current conditions to determine the best approach for themselves and their family,” she wrote.

Johnson wrote that parents and businesses would get a bigger say in making policy were she to become governor.

“I will ensure that when decisions impacting certain groups or stakeholders are made that there are representatives of those groups in the room,” Johnson wrote.

“I will be clear and transparent in communicating to Oregonians about the ongoing effect of COVID-19 in our lives and what the experts say we should be doing,” she wrote.

Labor vs. the health care industry

The candidates are divided on the role of government — and government regulation — in health care.

Those ideological differences will matter as the health industry charts a path to long-term recovery from the pandemic. There’s a dire statewide shortage of nurses, CNAs, and other health care professionals. There’s a lack of beds for patients that need long term care or mental health treatment. And there are rapidly rising costs that are crippling some of the state’s private health care systems; hospitals in Oregon have collectively lost $200 million so far this year.

A showdown is rumored to be brewing between hospital administrators and the Oregon Nurses’ Association over how to handle the labor crisis, and whether the state should be more involved in regulating nurses’ pay and working conditions.

During the KTZV debate in Bend, the candidates were asked what immediate steps they would take to support hospitals facing a capacity crisis and deteriorating finances.

They sparred in response, with Johnson attacking Kotek for making some of the state’s pandemic aid to hospitals and nursing homes contingent on them raising wages and paying overtime.

“Many of the hospitals passed on taking the money because of the strings including labor requirements that didn’t exist previously,” Johnson said. “We need to strengthen our health care system all across and not vilify their CEOs and downgrade and diminish their work.”

Kotek, a longtime ally of labor groups who is endorsed by the Oregon Nurses’ Association, returned the attack, accusing Drazan and Johnson of siding with hospital CEOs over nurses.

“In the pandemic, I think the contrast with my colleagues is that I supported the people on the ground doing the work,” she said.

“We don’t have a nurse shortage in Oregon, we have nurses who don’t want to go back to work at hospitals that have treated them poorly, not paid them well and continued to pay their CEOs millions and millions of dollars.”

Drazan weighed in too. “You cannot erode the hospital system itself and then act like labor will have somewhere to serve Oregonians. It’s just not realistic,” she said.

On other key issues as well, Drazan and Johnson are aligned with the health care industry leaders while Kotek has aligned herself with health care workers’ unions.

In 2021, when they were all serving in the Legislature, Kotek supported a bill, backed in part by labor unions, that gives the Oregon Health Authority sweeping power to review health system mergers and partnerships, while Drazan and Johnson voted against it. The Oregon Association of Hospitals and Health systems quietly sued the state over those regulations Oct. 3.